(Stand-up Comedian Who Was Known for His Self-Deprecating One-Liner Humor and Catchphrase 'I Don't Get No Respect!')

“Rodney Dangerfield” was the stage name of Jacob Rodney Cohen, a New York stand-up comedian. He was known for his self-deprecating humor, which included being stupid, ugly, sexually undesirable, and constantly wronged. His catch phrase, “I don’t get no respect,” was reflective of his early life. Growing up as “Jacob Cohen,” he was a fatherless “ugly duckling” in a poor Jewish family in Long Island in the 1920s and the 1930s. Despite changing his name to “Jack Roy” in 1940, he found that he could not succeed as a performer. He took up a variety of sales jobs, while still trying to work in the New York comedy circuit. In 1967, at the age of 46, Jack Roy’s ‘Rodney Dangerfield’ was slowly becoming a recognized name in the comedy club scene. By pure luck, he was invited to ‘The Ed Sullivan Show’ as a late replacement. Following this, he instantly became a star. His unique appearance and his relentless stream self-deprecating one-liners stole the show. After 30 years in the business, he became an overnight success. Dangerfield ended up headlining in Vegas. He eventually owned his own club in New York, named ‘Dangerfield’s.’ He also became a regular on chat shows and starred in movies such as ‘Caddyshack,’ ‘Easy Money,’ and Adam Sandler’s ‘Little Nicky. ‘ American Celebrities
Actors
Comedians
Stand-up Comedians
American Men
Career
Jacob Cohen started writing comedy at the age of 15 and was working in the notorious Catskills circuit at the age of 19, earning $12 a week. By then, he had legally changed his name to “Jack Roy.” His father, Phillip Cohen, a vaudevillian performer with the stage name “Phil Roy,” was rarely at home and subsequently abandoned his wife and family. It is not clear why young Jacob chose to recognize his father’s stage name in his own changed named, but Rodney Dangerfield legally remained “Jack Roy” until his death.
Unsurprisingly, Jack Roy found he could not survive on $12 a week and eventually took up various sales jobs to support his mother and siblings and later himself and his first wife, Joyce Indig. The couple remarried in 1963, having been divorced the previous year.
However, Jacob Cohen (Now officially Jack Roy.) never gave up on comedy. While working as a singing waiter at a club called the ‘Polish Falcon’ in Brooklyn, he came to know the MC of the show, Sally Marr. She introduced him to her son, another struggling comedian. They started interacting with a bunch of other new talents in a ‘Broadway’ drugstore called ‘Hanson’s,’ bouncing ideas around and hitting each other with wild gags. It was here that Marr’s son, better known by his stage name, “Lenny Bruce,” helped him become the forlorn and downtrodden “Rodney Dangerfield.”
Working as “Jack Roy” by day and pan-handling ‘Broadway’ by night as “Rodney Dangerfield” (a name borrowed from a Jack Benny character of the 1940s) he honed his stage act. He worked hard, perfecting the presentation of his stage persona: the “ugly schmuck” who could not catch a break.
From his first appearance on ‘The Ed Sullivan Show’ in 1967, Rodney Dangerfield appeared on the show a further 15 times. He appeared 72 times with Johnny Carson, made 47 appearances on ‘The Merv Griffin Show,’ did 28 features with Dean Martin, and appeared in over 30 movies, including, surprisingly, Oliver Stone’s ‘Natural Born Killers’ in 1994.
Dangerfield was getting ready to appear on the ‘The Tonight Show’ on his 80th birthday when he suffered a mild heart attack. He recovered sufficiently to appear on the show the next year, on his 81st birthday, but he was no longer a well man by then. Gearing up for a heart surgery a few months later, he was asked how long he was going to be in hospital. He quipped, “If all goes well, about a week. If not, about an hour and a half.” However, he was wrong. He died in hospital 6 weeks later, without regaining full consciousness after the operation. 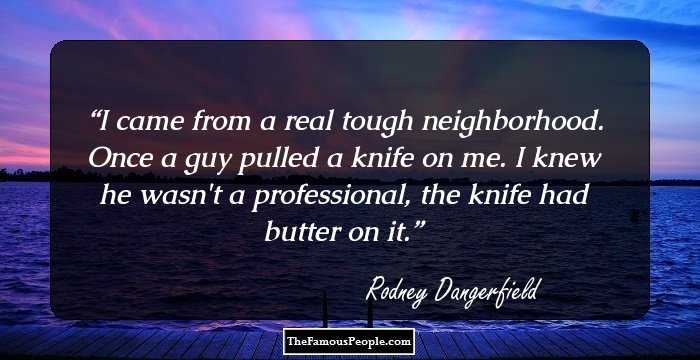 Quotes: Me, I
Family & Personal Life
Rodney Dangerfield was born Jacob Cohen, in Deer Park, New York, on November 22, 1921. He married his first wife, Joyce Indig, in 1949. They got divorced in 1962. However, he realized his mistake soon and remarried her in 1963. They divorced again in 1970, and Dangerfield remained unattached for 23 years, until he married his second wife, Joan Child, in 1993. This was his third marriage. Joan was 32 years his junior and continues to run memorials and charity activities in memory of her husband.
Rodney Dangerfield and Joyce had two children. Their son, Brian Roy, was born in 1949, and their daughter, Melanie Roy, was born in 1964, during the couple’s second stint together.
Dangerfield died on October 5, 2004. He was 82 years old at the time of his death. 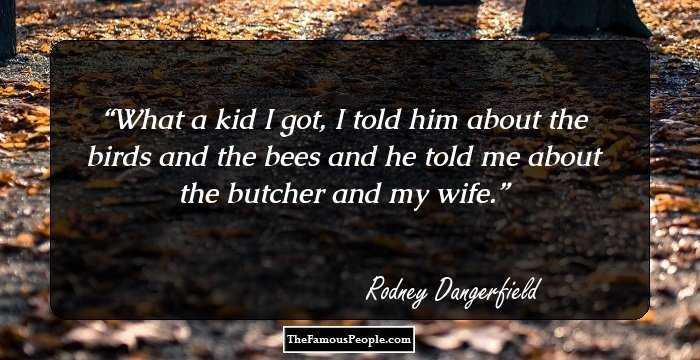 Quotes By Rodney Dangerfield | Quote Of The Day | Top 100 Quotes

See the events in life of Rodney Dangerfield in Chronological Order