Rodman E. ‘Rod’ Serling was an American scriptwriter, television producer, radio host and narrator. He was most popularly known for his television programs, especially for his science fiction anthology TV series, ‘Twilight Zone’, which was also produced by him so that he could control the creative quality of the series. Other famous writings by Serling are, ‘Requiem for a Heavyweight’, ‘Patterns’, ‘Night Gallery’, etc. He was awarded with many prestigious awards for his writings, like, Emmy, Golden Globe, Writers Guild of America Award, etc. Serling was always the flamboyant one in his family, with tales and stories to tell and his talent only developed as he grew up and once he achieved his military aspirations, he got into freelance writing for the radio and television. He was recognized for the first time, after he moved to New York, when ‘Patterns’ was aired. Serling was a man of principles, whose writing was purposeful and projected his ideas on anti-war activism and racial equality. He was the kind of artist who could not stand creative dissection of his work due to corporate policies, which is why he produced a show of his own and also a reason why he turned from radio to television as a medium of communication.
Continue Reading Below American Celebrities
Playwrights
T V & Movie Producers
American Men
Male Writers
Childhood & Early Life
Rod Serling was born on December 25, 1924 in New York to Esther and Samuel Serling. His father was a secretary and an amateur inventor before the birth of his children but later became a grocer and a butcher. His mother was a homemaker.
Serling family moved to Binghamton in 1926, which is where he spent his childhood. Since Serling was interested in performing from a young age, his father built him a stage in the basement where he used to act.
Serling had a reputation of being a class clown in elementary school, which is why most of his teachers did not pay much attention to him but his 7th grade teacher encouraged him to take part in school’s extracurricular activities. 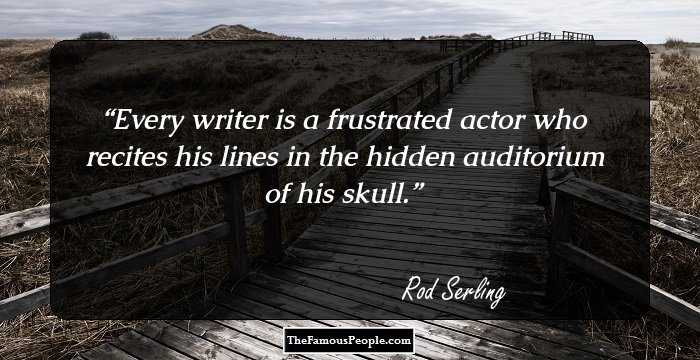 The Sexiest Men Of 2020, Ranked
Career
Serling joined the American military during WWII, shortly after graduating from Binghamton Central High School in 1943. He wanted to take part in the combat against Nazis but instead became a paratrooper in the Pacific theatre.
He came back home from the war with war injuries and a purple heart but the emotional scarring that he received by witnessing the brutality of human nature and sudden death, remained with him for the rest of his life.
Serling enrolled in the physical education program at Antioch College, Ohio. But his interest in broadcasting changed his mind and he altered his major to Literature and graduated in 1950.
Throughout his graduation, he participated in campus radio programs. He also took a part-time job as a parachute tester for the Army Air Forces; for such a job he had to, many times, put his life at risk.
In 1946, he volunteered at WNYC as an actor and writer and later, worked at the same station as a paid intern. He was first time credited for his work as a writer for the radio program, ‘Dr. Christian’.
His first nationally broadcast piece was released in 1949 for Grand Central Station, title, ‘Hop Off the Express and Grab a Local’ and in the following year his career as a professional writer began with WLW radio in Ohio.
From 1950-51, ‘Adventure Express’ was aired weekly on the WLW radio. It was a radio drama about a young girl and a boy travelling with their uncle, experiencing new adventures.
Some of the radio programs written by Serling during this time were - ‘Leave it to Kathy’, ‘Our America’, ‘Builders of Destiny’, etc. While working with radio, he felt that it was not living up to its standard and decided to move on.
Serling moved on to the television and became a freelance writer instead, as he was tired of his scripts getting edited or rejected all the time. He wrote dramatic anthology shows, for—‘Kraft Television Theater’, ‘Appointment with Adventure’, etc.
Continue Reading Below
In 1954, his agent convinced him to move to New York to benefit from more opportunities there. In the following year, Kraft Television Theater televised one of his scripts, titled, ‘Patterns’, which gave him his first taste of success.
After gaining great critical success with ‘Patterns’, Serling received many offers to write scripts, novels, etc. and he sold his old scripts but the old work could not live up to his newly found critical acclamation.
He wrote ‘Requiem for a Heavyweight’ for the Playhouse 90 TV series in 1956 and again proved his writing credibility. But soon he started to get tired of creative interference from the corporate so he decided to produce his own show.
In 1959, Serling’s most memorable work aired on CBS––‘Twilight Zone’. It was a series that ran for five seasons - it consisted of his creative take on topics like racial discrimination, sexism and other social stigmas.
After ‘Twilight Zone’ in 1969, Serling collaborated with NBC for his new series ‘Night Gallery’. He did not take the executive position. But, he increasingly became distressed with the interference and stopped writing for the show after three seasons.
In 1970, Serling became a part of KNXT’s 30-minute weekly series, ‘Rod Serling’s Wonderful World of….’, He hosted and narrated the essays that were written on various subjects for around 13 weeks.
He returned back to the radio in 1973 with ‘The Zero Hour’ - it was a show that had stories of mystery and adventure. It ran for two seasons and he was the host and writer of the program
His last and final performance on the radio was ‘Fantasy Park’ in 1975. It was a 48-hour long rock concert, aired by more than 200 radio channels all over America. He did the host segments, bumpers, custom promos, etc. 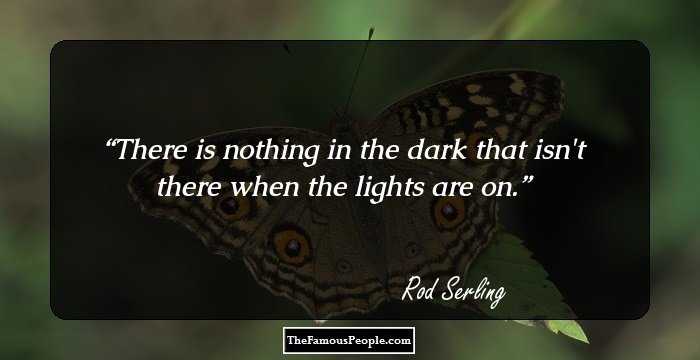 Continue Reading Below
Major Work
The greatest works of Serling’s writing career are, ‘Patterns (1954)’—a program that made him famous, ‘Requiem for a Heavyweight (1956)’—a show that again validated his caliber and ‘Night Gallery (1970)’, which earned him an award for writing.
Awards & Achievements
Serling was the winner of 6 Emmys in various categories like, ‘Patterns’, ‘Requiem for a Heavyweight’, ‘The Comedian’, ‘Twilight Zone’, etc. He also won prestigious awards like, Writers Guild of America Award, Golden Globe, Edgar Allan Poe Award, etc. 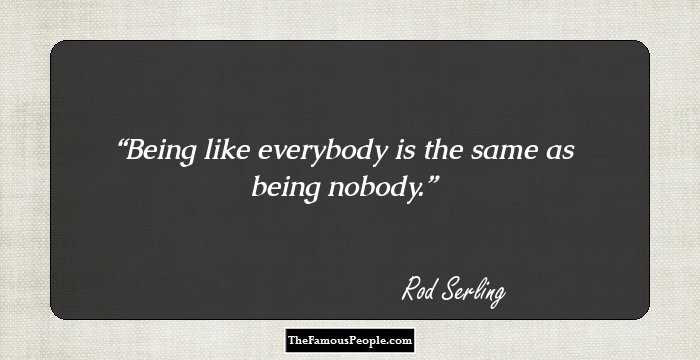 Quotes: Like
Personal Life & Legacy
In 1948, Serling got married to Carol Kramer; who was his fellow student at the university (she had earlier refused to date him in the beginning because of his flirtatious reputation). The couple had two daughters: Jodi and Anne.
He suffered a minor heart attack and was hospitalized in1975 but when he got another attack within two weeks, he had to undergo a surgery. He died two days later. He was 50 years old at the time.
Trivia
He was inducted by the Television Hall of Fame and the Science Fiction Hall of Fame, posthumously.
When he was not writing, performing or producing, Serling used to teach and give speeches on college campuses. He took classes on film studies where he watched selected movies with the students and critique on them later. He taught at Ithaca College from the late sixties until his death.
The main themes of his work were anti-war activism, racial equality and his female characters were always projected as strong and resilient. He was against social stigmas.
It was rumored at the time of his death that he suffered from multiple heart attacks because he was a heavy smoker, extremely stressed and in general an angry person.

Quotes By Rod Serling | Quote Of The Day | Top 100 Quotes

See the events in life of Rod Serling in Chronological Order