Robert Smith is an English musician and the lead singer of the British rock band, ‘The Cure.’ He is known for the heavy makeup in which he adorns himself—unkempt black hair, eyes lined with black liner, and smeared red lipstick—while he appears on stage for a performance. He revels in a variety of music genres like alternative rock, gothic rock, new wave, and post-punk. Born into a family of musicians and inspired by Jimi Hendrix, David Bowie, and The Beatles, he started playing the guitar at the age of 12. He is a multi-instrumentalist who can play four and six-string bass guitars, six and twelve-string guitars, double bass, drums, piano, trumpet, violin, and trombone in many combinations. His singing style is manifested with characteristic unsteadiness. As a songwriter, his lyrics are highly poetic and mysterious, the impact of his ‘altered state’, acquired from the usage of drugs. He is the only member who has been with the band ‘The Cure’ since the band was founded in 1976. He wrote and co-wrote most of the lyrics in his 35 years of musical career with the band. He has also been involved in other musical projects such as ‘The Glove’ and ‘Siouxsie and the Banshees’. Among his many vocal contributions, includes a 30-minute track, ‘Faith’, which was used in the movie, ‘Carnage Visors’. 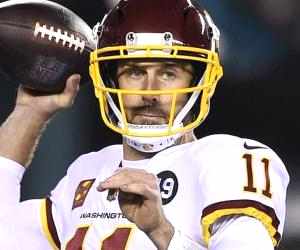 British People
Lyricists & Songwriters
British Men
Male Singers
Taurus Singers
Childhood & Early Life
Robert James Smith was born on 21 April 1959, in Lancashire, to James Alexander Smith and Rita Mary Smith. He was the third of the four children. When he was three, his family moved to Horley in Surrey. He was educated at St. Francis Primary School.
In 1966, his family moved to Crawley and he was educated at St. Francis Primary School, Notre Dame Middle School, and St. Wilfrid's Comprehensive School. He completed his school education by 1977.
Smith and his siblings were encouraged by their parents to pursue their musical talents and Smith began playing the guitar at the age of 12.
Continue Reading Below
You May Like

Who Is The Most Popular BTS Member?
Career
His career started at the age of 14 with the high school band ‘The Crawley Goat Band’ that also included his brother, Richard, sister Janet, and some of his friends as its members.
He formed the band ‘Easy Cure’ in 1976 along with Laurence Tolhurst, Porl Thompson, and Michael Dempsey with Smith performing the role of one of the songwriters and singer.
In 1978, the band was renamed as ‘The Cure’ with the dismissal of Porl Thompson from the group. The band worked for Chris Parry's recording label, Fiction Records.
From 1978 to 1979, the band released the singles ‘Killing and Arab’ and ‘10:15 Saturday Night’. They also released their debut album ‘Three Imaginary Boys’. By this time, he had become the principal writer for most of the songs of ‘The Cure’.
The band agreed to work along with ‘Siouxsie and the Banshees’ for Chris Parry's recording label, Fiction Records.
Smith went on a UK tour along with Steve Severin of ‘Siouxsie and the Banshees’, in 1979, for promoting their second album, ‘Join Hands’.
In 1980, Michael Dempsey left the band and Simon Gallup, a bass guitarist and Matthieu Hartly, a keyboardist joined the group. This was when Robert, along with his band, released their third album, ‘Seventeen Seconds’, with their single, ‘A Forest’ becoming a hit.
From July 1982 to February 1985, Smith had to shoulder the entire recording process of ‘The Cure’. He released the solo album ‘The Top’ in 1984, where Smith played all the instruments by himself except the drums.
‘Disintegration’, the 1989 album released by the band, featured at No. 3 in the UK music countdown and No. 12 in the US music countdown, with three of its songs featuring in the ‘Top 30’ list in UK and Germany.
Continue Reading Below
‘Wish’, the ninth album by The Cure was released in 1992 and featured popular hits ‘High’ and ‘Friday I’m in Love’.
Throughout the new millennium, Smith recorded new albums with The Cure. These include ‘Bloodflowers’ (2000), ‘The Cure’ (2004) and ‘4:13 Dream’ (2008).
From 2010 to 2012, he started to perform solo and also collaborated with a number of other artists working on solo covers such as Frank Sinatra’s ‘Witchcraft’ and ‘Very Good Advice’ from ‘Alice in Wonderland’.
Major Works
The album ‘Disintegration’ released in 1989 by ‘The Cure’ reached the No.3 position in the UK music chart and has sold over three million copies worldwide till date.
In the spring of 1992, the band, ‘The Cure’, released the album titled ‘Wish’ that became an instant hit, peaking at the No.1 position on all top UK music charts and at No.2 on US Charts.
Awards & Achievements
The single, ‘Lullaby,’ released in 1989 by the band 'The Cure' peaked at the number five position in the UK music Chart. It earned the Brit Award for British Video in 1990. The credit goes to Smith who wrote its lyrics based on his childhood nightmare.
In 2004, he was presented with the Godlike Genius Award by Tim Burton at the Shockwaves NME Awards for his guest appearance in the film ‘Mighty Boosh’.
In 2005, he won ‘Ivor Novello Award for International Achievement’ in recognition of his songwriting and composition skills.
Personal Life & Legacy
He married Mary Theresa Poole in 1988, whom he met at St. Wilfrid's when he was 14. He has dedicated his song, ‘Love Song,’ to Mary as his wedding gift. They have mutually agreed not to have children.
Trivia
This singer/song-writer of ‘The Cure’ fame has been voted as the ‘Sexiest Singer Alive’ by the magazine ‘Glamour’ in its July 2013 issue.
Recommended Lists:
Singers #906
You May Like

See the events in life of Robert Smith in Chronological Order