Robert Mitchum was a prolific American actor who appeared in over 110 films and TV series over the course of his career. Best remembered for his roles in several classic films noir, he is rated No. 23 on the American Film Institute's list of the 50 greatest American screen legends of all time. He ventured into Hollywood as an extra in movies, playing minor and supporting roles. Eventually he forayed into the genre of film noir with a supporting role in the B-film ‘When Strangers Marry’ and it did not take him much long to establish himself as one of the major actors in the genre. After being cast as Lt. Walker in ‘Story of G.I. Joe’, his popularity began to soar and he became a much sought after actor in Hollywood. A troublemaker from a young age, he was a tough guy both on and off the screen. His “Bad Boy” image lent him a sense of mystery and made him even more appealing to the audiences. Interestingly, his troubles with the law did not affect him negatively—in fact, they made him even more famous! He was once arrested for possession of marijuana and spent a week at the county jail. The movies released soon after his arrest ended up being big box office hits. In addition to being an actor he was also a moderately successful singer and composer
Continue Reading Below American Celebrities
Directors
Composers
American Men
Connecticut Actors
Childhood & Early Life
Robert Charles Durman Mitchum was born in Bridgeport, Connecticut, on August 6, 1917. His mother, Ann Harriet Mitchum, was a sea captain's daughter while his father James Thomas Mitchum, was a shipyard and railroad worker. Robert had one elder sister at the time of his birth.
His father died in an accident when Robert was barely two. His mother, who was pregnant at the time of his father’s death, gave birth to a boy. She soon remarried and had another daughter.
Robert grew up to be a mischief maker and often got into trouble in school. He was expelled from his high school following which he traveled throughout the country and took up a number of odd jobs to support himself.
In 1936, he went to stay with his sister in Long Beach, California. His sister advised him to join the Players Guild of Long Beach. He started appearing in their stage productions and also wrote plays which were performed by the guild. 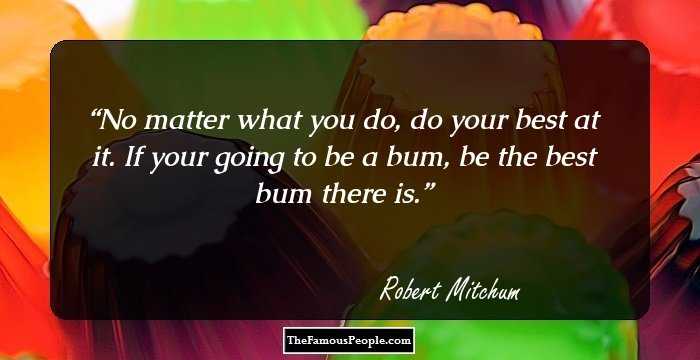 The Best Black Actresses Of All Time
Career
Robert Mitchum suffered from a nervous breakdown due to job related stress. This prompted him to look for work as an actor. Over the next couple of years, he played minor roles in films, mostly portraying the character of a villain.
In 1944, he appeared as Fred Graham in the suspense film, ‘When Strangers Marry’. The movie also featured Dean Jagger and Kim Hunter, and was the first in the genre of film noir he appeared in.
He played a troubled, sensitive man entangled in the affairs of his brother in the movie ‘Undercurrent’ in 1946. During the late 1940s he appeared in movies such as ‘Desire Me’ (1947), ‘Rachel and the Stranger’ (1948), and ‘The Red Pony’ (1949).
He welcomed the 1950s with a poignant performance in the film noir thriller ‘Where Danger Lives’ in which he played the role of Dr. Jeff Cameron who tends to an attempted suicide victim named Margo and eventually falls in love with her.
Along with his wife Dorothy he formed DRM (Dorothy and Robert Mitchum) productions in March 1955. But the company was not much successful and produced only four films, including ‘Bandido’ (1956).
In the late 1950s he appeared in a series of films like ‘Heaven Knows, Mr. Allison’ (1957), ‘Fire Down Below’ (1957), ‘ Thunder Road’ (1958), ‘ The Hunters’ (1958), and ‘ The Angry Hills’ (1959), but none of these were major box office hits.
His fortunes changed for the better in the early 1960s. He acted in movies which were not just commercial successes, but also critically acclaimed. These include ‘The Sundowners’ (1960) and ‘Cape Fear’ (1962).
Up until a certain point in his career he specialized in playing the antagonist. However, as he aged, he became more open to experiment with his roles and played Charles Shaughnessy, a mild-mannered schoolmaster in ‘Ryan's Daughter’ in 1970.
During his later years, he also ventured into television and appeared in a number of TV films and mini-series. A very hard working man, he remained active as an actor well into his seventies. Some of his last projects, ‘Backfire!’, ‘Dead Man’, and ‘Waiting for Sunset’ were released in 1995, just a couple of years before his death. 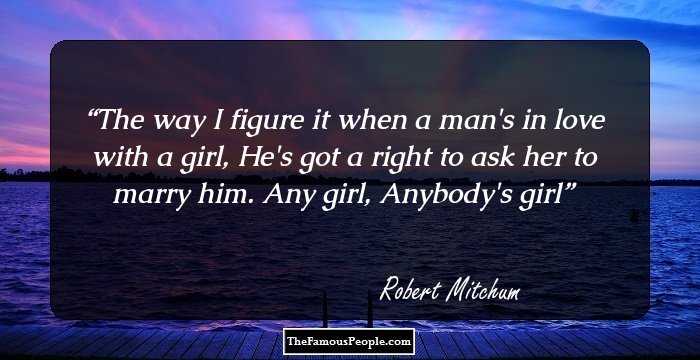 Quotes: Love, I
Major Works
His portrayal of the Irish-Australian Paddy Carmody in the film ‘The Sundowners’ is counted among his best performances. Adapted from Jon Cleary's novel of the same name, the movie was nominated for several Academy Awards and Mitchum received considerable appreciation for his performance.
Best known for playing villainous roles, he brought to life the character of the antagonist Max Cady in the psychological thriller ‘Cape Fear’. His portrayal of Cady is ranked at No. 28 on the American Film Institute's list of the top 50 movie villains of all time.
Awards & Achievements
Robert Mitchum was awarded the National Board of Review award for Best Actor for his performance in the Fred Zinnemann film,’ The Sundowners’ (1960).
He won a lifetime achievement award from the National Board of Review of Motion Pictures in 1991 and the Cecil B. DeMille Award from the Golden Globe Awards in 1992.
Personal Life & Legacy
He married Dorothy Spence in March 1940. The couple had three children. Robert Mitchum was never faithful to his wife and had numerous affairs throughout his marriage. Yet the couple remained together for almost 60 years until his death in 1997.
He was a heavy smoker and suffered from lung cancer during his later years. He died on July 1, 1997, in Santa Barbara, California, due to complications from the disease.

See the events in life of Robert Mitchum in Chronological Order