(One of the Greatest American Actors of All Time)

Robert Duvall is an American actor best known for his performance in the 1983 drama film 'Tender Mercies,' for which he won an 'Academy Award.' Among his awards is the prestigious 'National Medal of Arts,' which he received in 2005. He started his acting career in theater in the late-1950s before performing television and film roles. Over the course of his career, he has appeared in a number of films and television series, such as ‘The Twilight Zone,’ ‘To Kill a Mockingbird,’ ‘The Godfather’ film series, ‘The Apostle,’ ‘Apocalypse Now,’ and ‘Lonesome Dove.’ He is a proud recipient of an ‘Academy Award,’ ‘Emmy Award,’ ‘Golden Globe Awards,’ and BAFTA. Other than being an actor, Duvall has also served as an executive producer and director for some of his films. He is also a philanthropist. Along with Luciana Pedraza, whom he married in 2005, Robert Duvall founded the 'Robert Duvall Children's Fund' in 2001. He is also an ardent supporter of a nonprofit charity organization called 'Pro Mujer.' Robert Selden Duvall was born on 5 January 1931, in San Diego, California, USA, to William Howard Duvall and Mildred Virginia. While his father was a Virginia-born US Navy admiral, his mother was an amateur actress.

He has an English, German, Swiss German, French Huguenot, Welsh, and Scottish ancestry. He was raised in accordance with Christian Science belief.

He received his formal education from ‘Severn School.’ He graduated from ‘The Principia’ in St. Louis, Missouri in 1953 and later enrolled at ‘Principia College’ in Illinois.

From 1955 to 1957, he studied at the ‘Neighborhood Playhouse School of Theater’ in New York, where he was trained by Sanford Meisner. It was there that he befriended Dustin Hoffman and Gene Hackman.

Besides receiving acting training, he also took up odd jobs to support himself. He worked as a clerk in the Manhattan post office, did clerical work at ‘Macy’s,’ and also took up job as a truck driver. 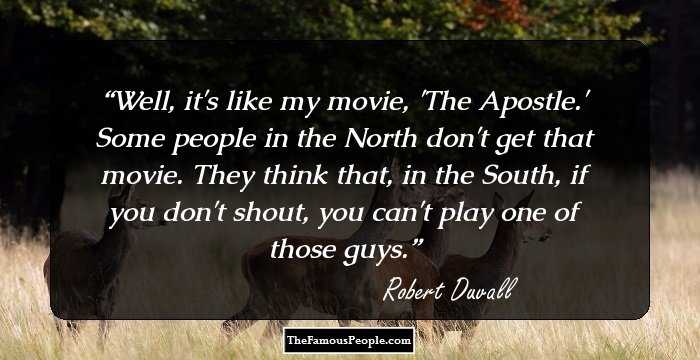 He started his professional acting career in the early-1950s. He played the role of a pilot in a stage show called ‘Laughter in the Stars,’ an adaptation of ‘The Little Prince.’

He was drafted to serve the United States Army for a year from 1953 to 1954. It was during his service at the military that he acted in an amateur production of the comedy ‘Room Service.’

After his discharge from the military, he returned to theater and was cast to play several roles in 1955. These roles included ‘Eddie Davis’ in Ronald Alexander's ‘Time Out For Ginger,’ ‘Hal Carter’ in William Inge's ‘Picnic,’ ‘Charles Wilder’ in John Willard's ‘The Cat And The Canary,’ ‘Paris’ in Arthur Miller's ‘The Crucible,’ and ‘John the Witchboy’ in William Berney and Howard Richardson's ‘Dark Of The Moon.’

In the year 1956, this budding star was seen in a number of theatre productions, such as Frederick Knott's ‘Dial M For Murder,’ Inge's ‘Bus Stop,’ and John van Druten's ‘I Am A Camera.’

His acting skills earned him much popularity and several other roles. The year 1957 witnessed him play the characters of ‘Mr. Mayher’ in Agatha Christie's ‘Witness For The Prosecution,’ ‘Hector’ in Jean Anouilh's ‘Thieves' Carnivall,’ and ‘Eddie Carbone’ in Arthur Miller's ‘A View from the Bridge.’

Apart from appearing at the ‘Gateway Theatre,’ he also made appearances at ‘Augusta Civic Theatre,’ ‘McLean Theatre,’ and ‘Virginia and the Arena Theatre.’ After playing many characters, he became a leading theatre actor.

He made his Off-Broadway debut in 1958, playing the character of ‘Frank Gardner’ in George Bernard Shaw's ‘Mrs. Warren's Profession.’ Some of his other Off-Broadway works include Michael Shurtleff's ‘Call Me By My Rightful Name’ and William Snyder's ‘The Days and Nights of BeeBee Fenstermaker.’

The year 1959 saw him play a number of lead roles, such as ‘Stanley Kowalski’ in Tennessee Williams' ‘A Streetcar Named Desire,’ ‘Maxwell Archer’ in ‘Once More With Feeling,’ ‘Igor Romanoff’ in Peter Ustinov's ‘Romanoff and Juliet,’ and ‘Joe Mancuso’ in Kyle Crichton's ‘The Happiest Millionaire.’

In 1959, he made his television debut in ‘Armstrong Circle Theater,’ appearing in an episode titled ‘The Jailbreak.’ He then made regular guest appearances in several television shows, including ‘Naked City,’ ‘The Untouchables,’ ‘Route 66,’ ‘The Twilight Zone,’ ‘The Outer Limits,’ ‘The Fugitive.’

While his career graph was steadily rising, he made his big screen debut with the film ‘To Kill a Mockingbird’ in 1962. Throughout the 1960s, he played minor and major supporting roles in several films.

In 1966, he made his Broadway debut as ‘Harry Roat, Jr.’ in Frederick Knott's ‘Wait Until Dark.’ Thereafter, he was seen playing the character of ‘Walter Cole’ in David Mamet’s ‘American Buffalo.’

He soon became a popular figure in the Hollywood film industry. Though he had appeared in a number of films, his biggest breakthrough came with the 1972 film ‘The Godfather’ in which he played the character of ‘Tom Hagen.’ He reprised his role as ‘Hagen’ in the film’s sequel in 1974.

Two years later, he was seen playing a notable supporting role in the film ‘The Eagle Has Landed.’ In 1979, he delivered a ‘Golden Globe’ award-winning performance in the film ‘Apocalypse Now,’ playing the supporting character of ‘Lt Colonel.’ Some of his other films from the decade include ‘Network,’ ‘The Great Santini,’ and ‘The Betsy.’

The 1980s turned out to be good for the actor as he earned an ‘Academy Award’ for ‘Best Actor’ for the film ‘Tender Mercies.’ His other releases of the decade include ‘The Natural’ and ‘Colors.’ Additionally, he also appeared in the miniseries ‘Lonesome Dove.’

During the 1990s, Robert appeared in as many as 21 films, sometimes starring in four films a year. While all his films did good business at the box office, two exceptionally successful ones are the ‘Oscar’ award-nominated film ‘The Apostle’ and ‘A Civil Action.’

In addition to appearing in films, he has also made numerous appearances in television, including the ‘Golden Globe’ award-winning portrayal of ‘Joseph Stalin’ in ‘Stalin.’ He also played ‘Adolf Eichmann’ in ‘The Man Who Captured Eichmann.’

In 2000, he appeared in three films, namely ‘Gone in 60 Seconds,’ ‘The 6th Day,’ and ‘A Shot at Glory.’ He was then seen appearing in a number of movies, including ‘Assassination Tango,’ ‘Gods and Generals,’ ‘Open Range,’ ‘Four Christmases,’ ‘Thank You for Smoking,’ and ‘Get Low.’

In 2011, he played the role of ‘Johnny Crawford’ in ‘Seven Days in Utopia.’ The following year, he had two releases, namely ‘Jayne Mansfield’s Car’ and ‘Jack Reacher.’

In 2014, he became the oldest person to receive an ‘Academy Award’ nomination for ‘Best Supporting Actor’ for his performance in ‘The Judge.’ In the following years, he appeared in movies like ‘Wild Horses,’ ‘In Dubious Battle,’ and ‘Widows.’ 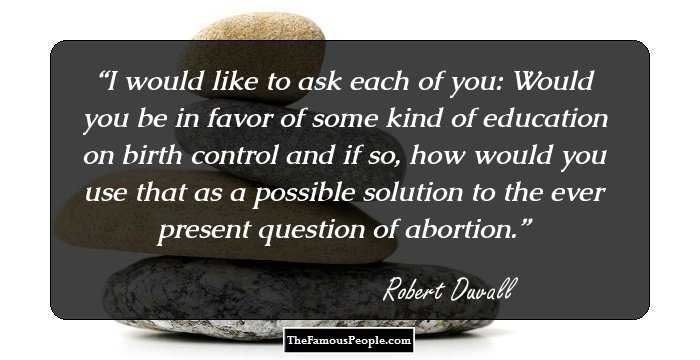 For his exemplary acting skills, he has been nominated seven times for the prestigious ‘Academy Awards,’ winning once for ‘Tender Mercies.’ Furthermore, out of seven nominations at the ‘Golden Globe,’ he won four times.

In addition to this, he has also won a BAFTA, ‘Screen Actors Guild Award,’ and ‘Emmy Award.’

In 2005, he was felicitated by President George W. Bush with the ‘National Medal of Arts’ at the White House.

Not many know that he is a trained Argentina Tango dancer and has a Tango Studio of his own in Argentina and the United States.

Besides his work commitment and busy schedule, he works for the ‘Robert Duvall Children’s Fund,’ which he founded along with Pedraza. The organization aims at assisting families in Northern Argentina through renovations of homes, schools, and medical facilities.

He has been an avid supporter of historic preservation and has openly voiced his opinion against the building of a Walmart store to safeguard ‘Wilderness Battlefield National Park.’ 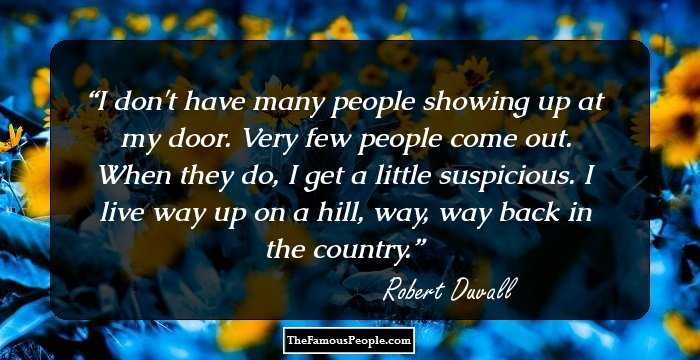 This talented ‘Oscar’ award-winning American actor of ‘The Apostle’ fame once shared a room with Dustin Hoffman and Gene Hackman during his early days.

Quotes By Robert Duvall | Quote Of The Day | Top 100 Quotes

See the events in life of Robert Duvall in Chronological Order