Robert Cormier was an American author and journalist, known for his novels/stories that have pessimistic themes. He authored ten major novels and several short stories, most of which are specifically for young adults. Although he did not enjoy initial commercial success, he always received immense critical acclaim. His novels and short stories are centered on themes of abuse, betrayal, mental illness, violence, and revenge. Another interesting feature in his novels is that good may not necessarily win over evil. This tendency of his novels to stress on the ‘negative’ led to the rejection of his publications from educational institutions and library lists. However, the author and several critics have explained his works as simply a realistic depiction of human nature. Owing to stories’ dark controversial nature, some of his works were initially banned. However, with time they have been accepted into mainstream publication houses and have also been translated into many languages. His works now appear frequently on the list of ‘Best Books for Young Adults’ of the American Library Association and are often recommended in the New York Times and School Library Journal.
Continue Reading Below American Celebrities
Short Story Writers
American Men
Male Writers
Male Novelists
Childhood & Early Life
Robert Cormier was the second of eight children born to Lucien Joseph and Irma M. Cormier. As a child, he liked reading books, staying at home. He began writing when he was in first grade in school.
By the time he reached 7th grade, he was sure that he wanted to become a writer and eventually his first short story, ‘The Little Things That Count’ was published in ‘The Sign’, a Catholic magazine, while he was still a freshman at Fitchburg State College. One of his professors sent the story for publishing without Cormier’s knowledge. 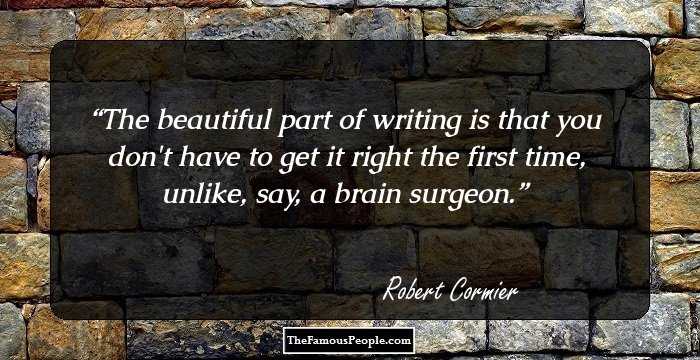 Quotes: You, Time, Beautiful
Continue Reading Below
You May Like

The Hottest Male Celebrities With The Best Abs
Career
Cormier began his career by writing scripts for radio commercials. He worked for 31 years as a newspaper reporter and a columnist for the ‘Worcester Telegram’ and ‘Gazette’ and ‘The Fitchburg Sentinel’, winning three major awards.
His first novel ‘Now and At the Hour’, was published in in 1960 which earned him great critical appreciation and kick-started his literary career.
‘A Little Raw on Monday Mornings’, his second work of fiction, was published in 1963 and a couple of years later he published ‘Take Me Where the Good Times Are’, before quitting journalism to become a full-time writer. ‘
He wrote and published his first novel for teenagers, ‘The Chocolate War’, in 1974. With its storyline and language, he quickly developed a reputation of being a brutally plain, uncompromising writer who dealt with morbid themes pertaining to the problems faced by teenagers, including anarchism and sexuality.
He produced some of his best works exploring the dark side of human nature, which are reflected in publications such as ‘Fade’ and ‘We All Fall Down’.
He also authored ‘Tenderness’ in 1997 and a year later published the thriller, ‘Heroes’.
His last work of fiction, ‘The Rag and Bone Shop’ was published posthumously in 2001. 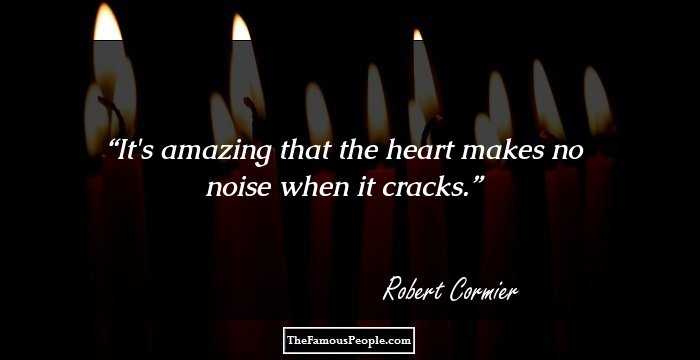 Quotes: Heart
Major Works
‘The Chocolate War’ was first published in 1974 and received mixed reviews at that time. Most of its content was frequently censored and although critics consider it one of the best young adult novels of all time, it was banned in many schools ‘for sexual content, offensive language, and violence’.
‘I Am the Cheese’, published in 1975, made it to the five annual book lists and was adapted for a film later. In 1997, the publication won the ‘Phoenix Award’.
Awards & Achievements
In 1991, he won the Margaret A. Edwards Award of the American Library Association in recognition of his body of work, which helped young adults grow and understand themselves. ‘I am the Cheese’ was cited as one of the books ‘taken to heart by young adults over a period of time’. 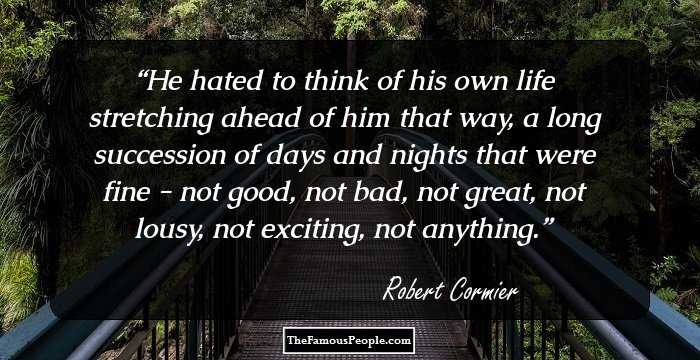 Quotes: Life, Think
Personal Life & Legacy
Cormier and his wife, Constance Senay, ‘Connie’, have four children whose teenage lives often influenced his writing.
Though his works are devoid of slang or teenage lexis, the speech patterns were heavily drawn from what he heard through the conversations his children had with their friends.
He passed away due to lung cancer.
Trivia
When this brilliant author was in the eighth grade, he witnessed his house burning but could not run out to help his mom and baby sister, as his teacher made him sit back and say prayers before letting him go. He claims that it took him years to overcome his anger at this incident.
Although this notable author wrote in English, most of his characters have French-sounding names, which he did as a tribute to a place called, French Hill, where he spent his childhood.
You May Like

Quotes By Robert Cormier | Quote Of The Day | Top 100 Quotes

See the events in life of Robert Cormier in Chronological Order