(Poet and Lyricist widely regarded as the national poet of Scotland and is celebrated worldwide.)

Robert Burns, famously known as the National Bard of Scotland, is the best-known Scottish language poet till date. Born into family of tenant farmers, he was mostly educated at home by his father. He started laboring at the farm at the age of twelve, which is said to have permanently damaged his health. Also famous for his amours as well as his rebellion against orthodox religion, he wrote his first poem, Handsome Nell, in the praise a farm girl at the age of fifteen. It was a spontaneous expression of his passion as until then he had no inclination to become a poet. However, he continued to write poems inspired by young ladies he met in the neighborhood and elsewhere. Later on, he started to write on other issues as well and eventually published, Poems, Chiefly in the Scottish Dialect around the age of twenty-seven. Later, he stared contributing to other works such as Scots Musical Museum and A Select Collection of Original Scottish Airs, spending his last years in not only making original compositions, but also collecting folk songs from across Scotland. Robert Louis St...
DID WE MISS SOMEONE?
CLICK HERE AND TELL US
WE'LL MAKE SURE
THEY'RE HERE A.S.A.P
Quick Facts 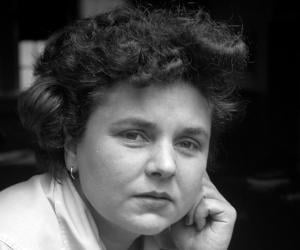 Robert Burns was born on 25 January 1759 in Alloway, a village located on the River Doon in South Ayrshire, Scotland. At the time of his birth, his father, William Burnes, was a tenant farmer at Ayrshire and wrote A Manual of Religious Belief for the use of his children.

His mother, Agnes nee Broun, sang legends from local oral traditions as well as folk songs while she continued with her heavy chores.  Listening to her, Robert developed his love for songs at a young age.

Born eldest of his parents seven children; he had three brothers and three sisters. Next to him was Gilbert, born in 1760, followed by Agnes, Annabella, William, John and finally Isabella.

Robert Burns was initially schooled at home by his father, who taught him reading, writing, arithmetic, geography, and history. From 1765, Robert started attending an adventure school established by John Murdoch.

In the Easter of 1766, the family moved to Mount Oliphant farm, located southeast of Alloway. For next two years Robert and Gilbert continued to attend the adventure school in Alloway, walking to and fro each day, learning bit of Latin, French and Mathematics, concurrently working at the farm.

Soon he acquired a superficial reading knowledge of French and a bare smattering of Latin. His teacher, John Murdoch, also instilled in him a love for reading, introducing him to the eighteenth-century English literature.  He continued to keep in touch, sending them books even after leaving the area in 1768.

From 1768 onwards, Robert Burns studied with his father, eventually entering Dalrymple Parish School in 1772. But as the harvest time approached, he had to return home to work at the farm. In the following year, he was sent to lodge with Murdoch for three weeks to study grammar, French, and Latin.

By 1774, he had started taking up most of the loads at the farm, laboring all day long. Young, ambitious and restless, he also continued to study at home, reading most of the important 18th-century English writers as well as Shakespeare, Milton, and Dryden. 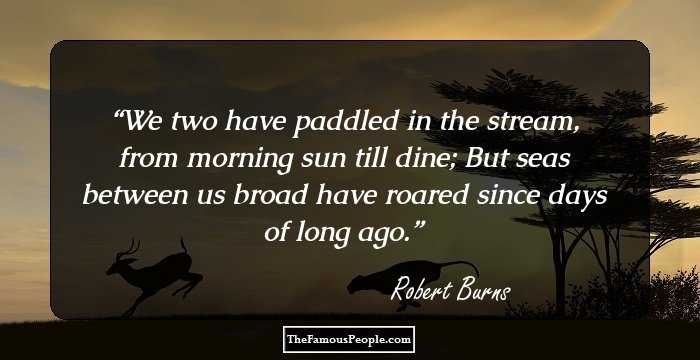 In 1774, when he was fifteen years old, Robert Burns became attracted towards a farmhand, a girl called Nelly Kilpatrick, whom his father had employed to assist in the farm. Out of his infatuation was born his first song, O, Once I Lov'd A Bonnie Lass, also known as Handsome Nell.

In 1775, he was sent to Kirkoswald to finish his education and there he met a thirteen- year-old girl called Peggy Thompson. She too inspired him to write two songs Now Westlin' Winds and I Dream'd I Lay.

In 1777, the family moved to a large farm in Lochlea, located near Tarbolton, in search of better fortune.  By then, Robert Burns had started working in the farm, toiling hard to assist his father.

In 1781, he moved to Irvine to be trained as a flax-dresser, working at the heckling shop in the Glasgow Vennel for nine months. There he met and befriended Richard Brown, who influenced him greatly, encouraging him to continue writing poems.

Burns had later said "I had the pride before, but he (Brown) taught it to flow in proper channels. His knowledge of the world was vastly superiour to mine, and I was all attention to learn".  Although Burns had to return home soon, their friendship continued to flourish. 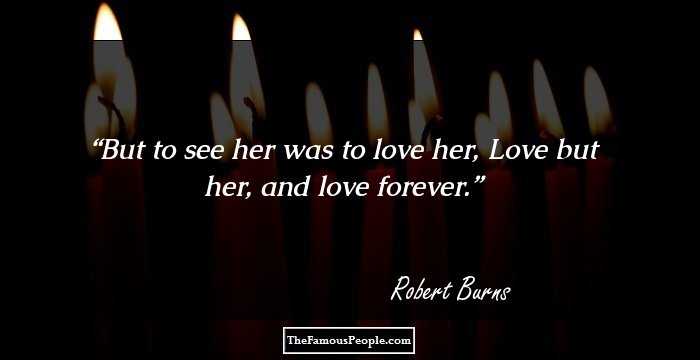 In 1784, William Burnes passed away, leaving Robert to look after the family. Initially, he and his brother Gilbert tried to maintain the farm at Lochiea, but on failing to do so they moved to the farm at Mossgiel, near Mauchline.

Although he was not very successful as a tenant farmer, Robert Burns rapidly developed his skill in poetry-writing during his stay at Mossgiel. He now began to express his emotions such as love, friendship, amusement or his reactions on social happenings through verses.

Sometime in early 1786, Robert Burns decided to migrate to Jamaica to work as a bookkeeper. Since he did not have the funds to pay for the passage, he decided to publish some of the poems he wrote in 1784-1785 by subscription.

On 3 April, 1786, he approached John Wilson, a printer in Kilmarnock, for publishing his poems in book form. On 31 July, his first book, Poems, Chiefly in the Scottish Dialect, saw light of the day. Priced at £3, the work was an instant hit, solving much of his financial problems.

Also known as The Kilmarnock volume, the collection contained such poems as The Cotter's Saturday Night, which in due course inspired numerous works of art and literature. Other well-known poems include The Twa Dogs, Address to the Deil, Halloween, Epitaph for James Smith, and To a Mountain Daisy. 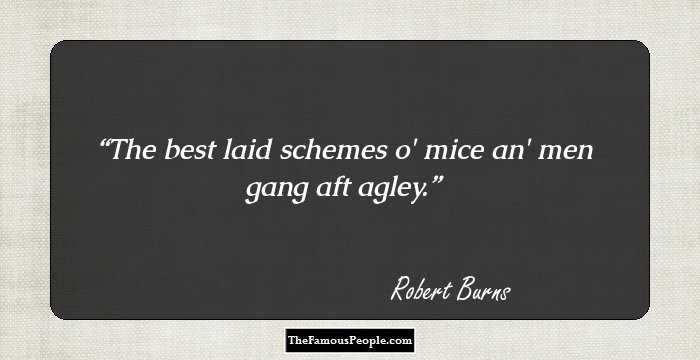 With the success of Poems, Chiefly in the Scottish Dialect, Robert Burns abandoned his plan to go to Jamaica. Instead, he set out for Edinburgh on 27 November 1786. In the same year, he wrote one of his most famous poems, To a Louse, On Seeing One on a Lady's Bonnet at Church.

In the winter of 1786-1787, he met James Johnson, a struggling music engraver and seller, who loved old Scot songs and was determined to preserve them. As Burns shared his interest, the two began to collaborate, resulting in the publication of the first volume of Scots Musical Museum in 1787.

In 1787, a new edition of his Poems was published, extending his fame beyond the boundary. During this period, he also visited some parts of Scotland, writing the first version of The Battle of Sherramuir while touring the highland in the same year.

In March 1788, Robert Burns left Edinburgh and in June took a lease on Ellisland Farm in Dumfriesshire. However, it took him one more year before he could settle down there with his newly wedded wife and their young family. Unsuccessful in farming, he joined the Customs and Excise department in 1789.

Continuing to compose, he wrote Auld Lang Syne in 1788, Tam o' Shanter in 1790. In the following year, he left the farm and settled down in Dumfries, where he lived for the rest of his short life, continuing with his job as an excise officer.

While in Dumfries, he also wrote numerous songs for the Scots Musical Museum, whose final volume was published in 1803, seven years after his death. While some of these songs were original lyrics set in old tunes, he also re-wrote many old lyrics, giving them a new look.

Robert Burns is probably best known for his 1790 long poem Tam o' Shanter. First published in 1791, the work is about a farmer called Tam and employs a mixture of English and Scottish.

On 5 August 1788, Robert Burns married Jean Armour, whom he first met in 1784. They soon went into relationship and their first set of twins was born in 1786. Although he wanted to marry her, her father’s reluctance came in the way and feeling abandoned, he started having other relationships.

As Burns became well-known across Great Britain, Jean's father relented and they finally got married in 1788, having nine children together. His legitimate children were Robert, Jean, William Nicol, Elizabeth Riddell; James Glencairn, Francis Wallace and Maxwell. That apart, they had a second set of twins, who died in infancy.

He also had at least four children born out of wedlock, the eldest of them being Elizabeth Burns, born in 1785. At her birth he wrote Welcome! lily bonie, sweet, wee dochter, Tho' ye come here a wee unsought for…

Robert Burns died of heart disease on 21 July 1796. First buried in the far corner of St. Michael's Churchyard in Dumfries, his mortal remains were moved to the Burns Mausoleum, built in his memory in the same cemetery, in September 1817.

He was posthumously given the Freedom of the Town of Dumfries. Today, the houses he lived in have been turned into museums. He also has his statues erected and parks named after him in different cities across the world.

Quotes By Robert Burns | Quote Of The Day | Top 100 Quotes

See the events in life of Robert Burns in Chronological Order