Popularly known as ‘Dean of Science Fiction Writers’, Robert A Heinlein was one of the most influential and controversial authors, who broke the realms and scaled the genre of science fiction writing to newer heights. He set a standard for scientific and engineering credibility and enhanced the quality of the genre impeccably. Together with Isaac Asimov and Arthur C. Clarke, he was one of the ‘Big Three’ of science fiction authors. In his lifetime, Heinlein published 32 novels, 59 short stories, and 16 collections. Interestingly, his stories did not just revolve around science fiction and instead addressed social themes like the importance of liberation, self-reliance, the influence of organized religion on culture and government and the tendency of society to repress nonconformist thought. Philip K. Dick
DID WE MISS SOMEONE?
CLICK HERE AND TELL US
WE'LL MAKE SURE
THEY'RE HERE A.S.A.P
Quick Facts

Quotes By Robert A. Heinlein Soldiers

American Celebrities
Aerospace Engineers
Science Fiction Writers
American Men
United States Naval Academy
Childhood & Early Life
Robert A. Heinlein was born on July 7, 1907 to Rex Ivar Heinlein and Bam Lyle Heinlein in Butler, Missouri. He was the third child of the couple.
Much of his growing up years was spent in Kansas City, the place where the Heinlein family shifted a few months after his birth. The place had an overwhelming influence in shaping his personality and his works.
He developed an interest in astronomy from a very young age. By the time he was 16, he read almost every book available on astronomy and science fiction.
Completing his preliminary education from Central High School, he enrolled himself at the Naval Academy, in Annapolis, Maryland, in 1925. He graduated from the same in 1929 with a BS degree in Naval Engineering. 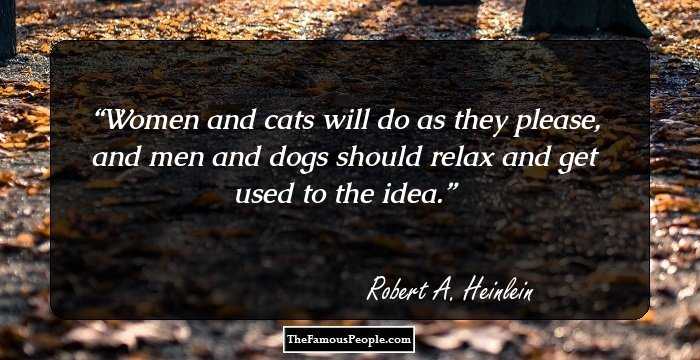 Quotes: Women, Will
Continue Reading Below
Career
Upon gaining his graduation degree, he served as an officer in the Navy. In 1931, he was commissioned to work under radio communications in the new aircraft carrier USS Lexington.
From 1933 to 1934, he served on-board USS Roper, and was promoted to the rank of lieutenant. He was relieved from his duties in 1934 following diagnosis of pulmonary tuberculosis.
For a brief duration, he attended graduate classes in mathematics and physics at the University of California at Los Angeles but did not continue with the same for long. He then pursued a career in politics.
To survive a living, he took up various jobs including in real estate sales and silver mining. He was an active supporter of the Upton Sinclair’s End Poverty movement and supported the former during his democratic nomination for Governorship.
His first attempt at politics was an unsuccessful one, for a seat in the California State Assembly in 1938. The crushing defeat and burden of mortgage left him with no choice but to forego his second career option as well.
Meanwhile, a notice from ‘Thrilling Wonder Stories’ calling for submission from new and unpublished writers caught his eye and stirred his interest in what would eventually become his third and final career option – writing.
He turned to pen stories. The following year, ‘Life Line’ became his first ever story to be published in the August issue of Astounding Science-Fiction. In November, his second published story ‘Misfit’ was published.
Soon, he gained the reputation of being a leader of the new movement toward social science fiction. During World War II, he studied aeronautical engineering to serve at the Philadelphia Naval Shipyard in Pennsylvania.
He continued to pursue his writing career but progressed from fiction tales to non-fiction on political topics. In February 1947 came his first of the four influential short stories, ‘The Green Hills of Earth’ published at the Saturday Evening Post magazine.
Continue Reading Below
From 1947 through 1959, he penned a series of juvenile novels for Charles Scribner’s Sons publishing company, releasing one book every autumn. Some of the books included, ‘Have Space Suit –Will Travel’, ‘Farmer in the Sky’, ‘Starman Jones’, ‘Red Planet’ and so on.
In 1950, he co-wrote the script and invented the effects in the Academy Award winning documentary-like film, ‘Destination Moon’.
In 1952, he started writing for Boy’s Life. The same year, he along with his wife penned an article titled, ‘A House to Make Life Easy’ wherein both gave in their input. The article presented some novel and innovative features.
In 1953, he undertook a voyage along with his wife, travelling round the world. Inspired by his travels, he penned a book, ‘Tramp Royale’. Though the book found no takers then, it later provided background material for science fiction novels.
In 1958, a full-paged article on Colorado Springs newspaper urging US to stop nuclear testing unilaterally outraged him and led to the formation of the Patrick Henry League. For the next couple of weeks, he wrote counter articles, attacking the Communist-line of thinking and urging others to support the same.
The constraints of writing novels for children creatively impounded him. Soon, he released himself from the shackles by finding himself a new publisher. He then switched to more mature write-ups. His last juvenile novel was ‘Starship Troopers’ published in 1959.
His 1961 released book, ‘Stranger in a Strange Land’ reaffirmed his lifelong interest in science fiction and redrew the boundaries of the genre. The book gained him utmost popularity in ‘counterculture’ and earned him the status of a personal guru.
In 1966, he came up with yet another extraordinary award winning work ‘The Moon is a Harsh Mistress’. The decade of 1970s started on a bad note as he suffered from perforated diverticulum.
It was only in 1972 that he fully recovered from his health condition to concentrate on writing. The following year, he came up with his next work, ‘Time Enough for Love’. The book stood on the threshold of his later works as it introduced many themes which were basically found in his later fiction.
Continue Reading Below
The years of 1976 and 1977 were dedicated to reorganizing blood donation camps in the United States. He served as the Guest of Honor at the World Science Fiction Convention.
In 1978, he set out for yet another vacation with his wife. It was during this trip that he suffered from a transient ischemic attack. He underwent a carotid bypass operation to restore and recover himself fully.
In 1983, he undertook a long delayed trip to Antarctica, the only continent which he had not visited. Returning from the same, he penned the novel, ‘Job: A Comedy of Justice’.
Meanwhile throughout the 1980s, he actively participated in the space movement and was a member of the Citizens Advisory Council on National Space Policy. He collaborated with Jerry Pournelle to write space policy papers for the incoming Reagan Administration. 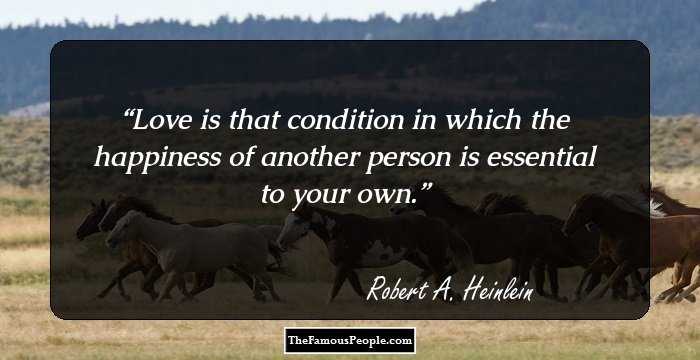 Quotes: Love, Happiness
Awards & Achievements
He was named by the Science Fiction Writers of America as its first Grand Master in 1974.
An asteroid, 6312 Robheinlein (1990 RH4), discovered on September 14, 1990 by H. E. Holt, has been named after him.
In 1998, he was inducted in the Science Fiction and Fantasy Hall of Fame
In 2001, ‘Robert A. Heinlein Chair In Aerospace Engineering’ was created by the United States Naval Academy.
In 2013, he was announced as an inductee in the Hall of Famous Missourians. His bronze statue would be one of the forty four which would be permanently displayed in the Missouri State Capitol in Jefferson City.
Personal Life & Legacy
He married thrice in his lifetime. The first was to Elinor Curry in 1929. The relationship did not work out and the two separated a year later in 1930.
He later married Leslyn MacDonald in 1932. She remained his partner for fifteen years. She undertook various travels with him and assisted him in his write ups. The couple applied for divorce in 1947.
In 1948, he tied the nuptials for a third time to Virginia ‘Ginny’Gerstenfeld. He remained with her until his death forty years later.
His health was failing over his last few years. In 1987, he required advance medical attendance. He breathed his last on May 8, 1988 in his morning nap. He was cremated and his ashes were scattered in the Pacific. 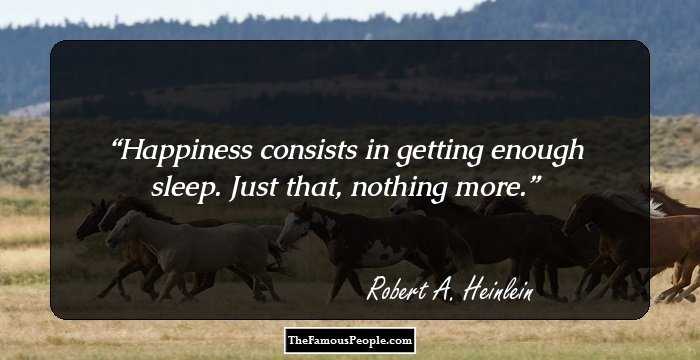 Quotes: Happiness
Trivia
This science fiction writer’s first book was actually the last to be published. After his death a lost manuscript was discovered. ‘For Us, the Living’ was written before ‘Lifeline’ but not published until 2003.
Recommended Lists:
Writers #124
Miscellaneous #407
Engineers #52

Quotes By Robert A. Heinlein | Quote Of The Day | Top 100 Quotes

See the events in life of Robert A. Heinlein in Chronological Order 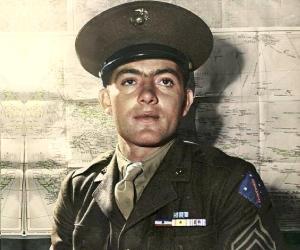