Richard III was theking of England from 1483 until his death in 1485. He was the last king of the Plantagenet dynasty. He was also the last king from the House of York. He was one of the many sons of Richard Plantagenet, 3rd Duke of York, who had a strong genealogical claim to the throne of England. He grew up during a period of great political turbulence in England and lost his father and an elder brother early in his life.His other elder brother eventually claimed the throne of England as King Edward IV and Richard was named Duke of Gloucester and made Knight of the Garter. He enjoyed an influential position in his brother’s court. After the untimely death of King Edward IV, his 12-year-old son Edward Vwas to succeed his father. Richard, on the other hand, was named Lord Protector of the realm. However, shortly before Edward V’s coronation, his parents’ marriage was declared invalid, thus making Edward V illegitimate and ineligible for the throne. This led to the crowning of Richard III as the king of England. His rule did not last long as he was killed in the ‘Battle of Bosworth Field’ in Leicestershire, two years after his coronation. Founder/Co-Founder: Council of the North, College of Arms

Richard III was born on 2 October 1452, in Fotheringhay Castle, Northamptonshire, England.He was the 12th of 13 children born to his parents. His father Richard Plantagenet, 3rd Duke of York and Cecily Neville, had a strong genealogical claim to the throne of England. The infamous ‘Wars of the Roses’ was going on at the time of his birth.

In 1460, his father and elder brother Edmund, Earl of Rutland, were killed in the ‘Battle of Wakefield.’An eight-year-old Richard and his brother George was sent to live in the Low Countries following this tragedy.

In 1461, Richard’s eldest brother Edward was crowned as King Edward IV and Richard returned to England to attend the coronation. At this time, Richard was named Duke of Gloucester and made Knight of the Garter and Knight of the Bath.

He was brave and displayed exemplary military skills from a young age. He was appointed the sole Commissioner of Array for the Western Counties in 1464, when he was 11.Bythe time he turned 17, he had an independent command.

In October 1469, he was made Constable of England.The following month, he replaced William Hastings, 1st Baron Hastings, as Chief Justice of North Wales. Over the next couple of years, he was named Great Chamberlain and Lord High Admiral of England.

‘The War of the Roses’ resumed in 1469 and King Henry VI snatched the throne from Richard’s brother Edward. Both Richard and Edward were exiled during Henry’s reign. However, the brothers returned to take back the crown and soon Henry was overthrown.Subsequently, Edward IV reclaimed his throne. 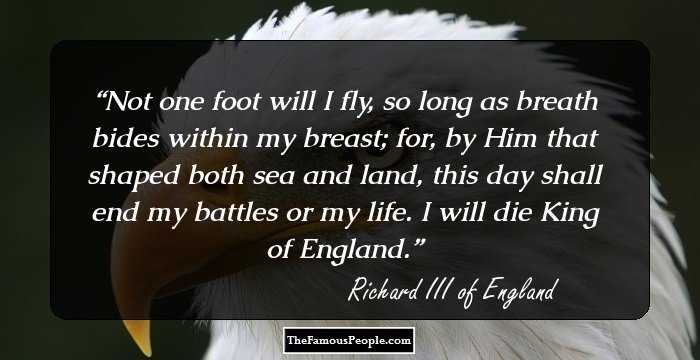 King Edward IV died in April 1483. His 12-year-old son Edward V was named the successor to the throne and Richard was made Lord Protector of the realm. He quickly asserted his position and tried to keep the queen away from exercising her powers.

Richard took Edward V and his brother into custody and lodged them in the Tower of London. Arrangements were being made for Edward's coronation on 22 June 1483.However, a controversy erupted in the kingdom regarding the validity of the marriage of Edward V’s parents,Edward IV and Elizabeth Woodville. The marriage was declared invalid, thus rendering Edward V and his brother illegitimate and illegible for the throne.

On 6 July 1483, Richard was officially crowned as King Richard III. Edward V and his brother were never seen in public again, and this gave rise to accusations that Richard had ordered the murder of his nephews, which in turn fueled the legend of the Princes in the Tower.

Many allies of Edward IV were disturbed by the developments in the court as they believed that the rightful heir to the throne was Edward’s son and not Richard. Henry Stafford, 2nd Duke of Buckingham, led a revolt against Richard in October 1483 but the revolt collapsed quickly.

Another revolt arose against him in August 1485. Henry Tudor, Earl of Richmond, who was a Lancastrian claimant to the throne, led a rebellion against Richard. He engaged Richard in the ‘Battle of Bosworth Field’ in Leicestershire. Several of the key lieutenants in Richard’s army, including Lord Stanley, Sir William Stanley, and Henry Percy, 4th Earl of Northumberland, defected. King Richard III fought bravely but lost his life in the battle.

Richard married Anne Neville, the younger daughter of the Earl of Warwick, on 12 July 1472. Anne was a widow who had previously been married to Edward of Westminster. Richard and Anne had a son who died young.

He also had two illegitimate children who were believed to have been born before his marriage to Anne.

King Richard III lost his life on 22 August 1485 while fighting against Henry Tudor in the ‘Battle of Bosworth,’ thus becoming the last English king to be killed in battle. Henry Tudor succeeded Richard to become the king of England.