Pope John Paul II was the sovereign of the Vatican City State and head of the Catholic Church from 1978 until his death in 2005. Plenty have been written and said about the remarkable journey of Pope John Paul II. During his lifetime, he earned both admiration and criticism for his opinions and enjoyed great respect among the masses. Along with being the longest-serving Pope in history, he was also the first non-Italian to become the Pope since 1523. Considered one of the most powerful religious authorities of the 20th century, he was instrumental in improving relationships of the Catholic Church with Judaism, Islam, the Eastern Orthodox Church, and the Anglican Communion. Never restricting himself to the comforts and safety of Vatican, he pushed the boundaries of religion, culture, caste, and creed to spread the message of ‘God’ and apologized for the wrong-doing and sufferings inflicted by the Catholic Church over the centuries. However, he defended the Church’s decision to oppose the marriage of same sex couples for which he also faced great opposition. He vehemently opposed the various aspects of Liberation Theology (liberation movement in catholic theology) and also criticized the U.S invasion of Iraq. Anthony De Mello
DID WE MISS SOMEONE?
CLICK HERE AND TELL US
WE'LL MAKE SURE
THEY'RE HERE A.S.A.P
Quick Facts

Pope John Paul II was born Karol Jozef Wojtyla on 18 May 1920, in Wadowice, Second Polish Republic, to Karol Wojtyla sr. and Emilia Kaczorowska, a school teacher in Wadowice, Poland. He was the youngest of three children.

He witnessed great tragedies during his childhood. His mother passed away when he was just nine. Three years later, his brother also died.

After moving to Krakow with his father in 1938, he was enrolled at the ‘Jagiellonian University.’ There, he learned philosophy and languages and also volunteered as a librarian.

While pursuing education, he worked with various theatrical groups as a playwright. He also developed a liking towards languages and learned 12 foreign languages, which he would later use extensively while serving as Pope

In 1939, Nazis invaded Poland and the university was forced to shut down. Those capable of working were required to find suitable jobs. Wojtyla worked as a messenger for a restaurant as well as a manual labourer in a lime stone quarry. He also worked in a chemical factory. 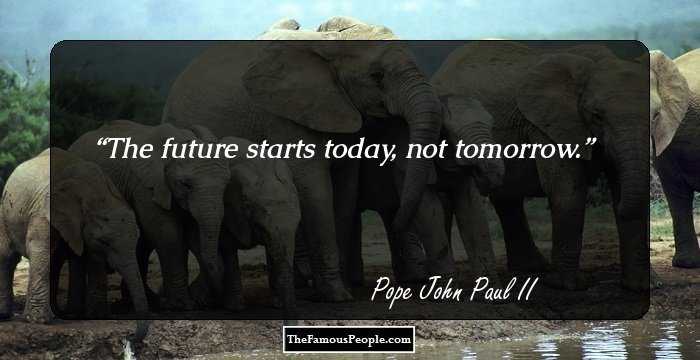 By the time his father died, he had already resolved to become a priest. In order to achieve his goal, he approached the Bishop’s Palace in Krakow in 1942 to seek permission to study for priesthood. Soon, he started attending ‘Clandestine Underground Seminary’ run by the Archbishop of Krakow.

During ‘World War II,’ on August 6, 1944, the day which came to be known as the ‘Black Sunday,’ ‘Gestapo,’ the secret police of Nazi Germany, started imprisoning young men to prevent uprisings in Krakow.

To avoid being captured, he hid himself in the basement of his uncle’s house and later escaped to the Archbishop’s Palace. After the Germans fled the city, the students reclaimed the dilapidated seminary where Wojtyla volunteered to clean the piles of excrement in the toilets.

After completing his studies, he was ordained a priest on November 1, 1946. As a priest, he was sent to the ‘Pontifical International Athenaeum Angelicum’ in Rome to study under French Dominican Fr. Reginald Garrigou-Lagrange.

He became a licentiate in July 1947. He successfully completed his doctoral thesis titled ‘The Doctrine of Faith in St. John of the Cross’ on June 14, 1948. He returned to Poland the same year. 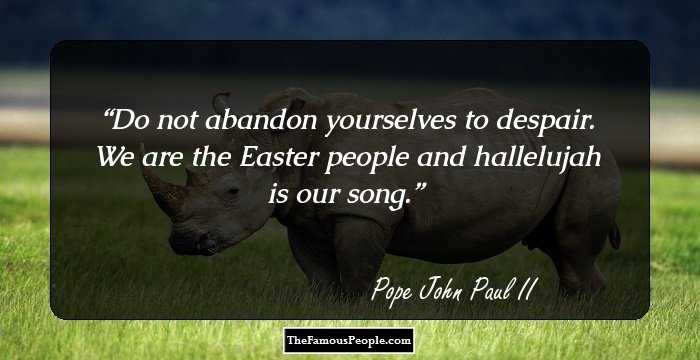 Soon, he started serving as a priest in Niegowic, a village 15 miles from Krakow. The following year, he moved to Saint Florian's parish in Krakow where he worked as a teacher of ethics at the ‘Jagiellonian University’ and later at the ‘Catholic University of Lublin.’

In 1954, he completed his second doctorate in philosophy and started writing for the newspaper 'Tygodnik Powszechny' or the ‘Universal Weekly.’ Apart from writing about contemporary matters related to the Church, he also addressed issues like war and life under communism.

He always categorized his literary and religious works and published the former under a pseudonym to make sure that readers appreciate or criticize them without getting influenced by the author’s reputation.

During his Kayaking vacation in July 1958, he came to know about his nomination for the position of Auxiliary Bishop of Krakow. After he agreed to serve as an auxiliary to Archbishop Eugeniusz Baziak, he was consecrated to the Episcopate on September 28, 1958, making him the youngest Bishop in Poland.

In 1960, he authored a theological book titled ‘Love and Responsibility,' defending the teachings of the Church on marriage.

Following the death of Baziak in 1962, he became the Vicar Capitular, temporary administrator of the Archdiocese. In this capacity, he took part in the ‘Second Vatican Council’ where he contributed greatly to ‘Decree on Religious Freedom’ and the ‘Pastoral Constitution on the Church in the Modern World.’

He also took part in the ‘Assemblies of Synod of Bishops’ and his contributions as the temporary administrator were being recognized. He was made the Archbishop of Krakow on December 1963 by Pope Paul VI.

On June 26, 1967, he was promoted to the Sacred College of Cardinals. As the Cardinal-Priest of the titulus of San Cesareo in Palatio, he helped formulate the encyclical ‘Humanae Vitae,’ which dealt with issues, such as abortion and artificial birth control.

After the death of Pope Paul VI, Albino Luciani was appointed the next Pope – Pope Paul John I. However, he passed away after 33 days, thus calling for another conclave of cardinals.

Though Cardinal Giuseppe Siri and Cardinal Giovanni Benelli were the main contenders for the post, they faced some opposition. Thereafter, Cardinal Franz König, the Archbishop of Vienna, suggested Karol Jozef Wojtyla’s name as a potentiate candidate.

To everyone’s surprise, Wojtyla won the election on the eighth ballot of the second day, receiving 99 votes from 111 participating electors. Succeeding Pope John Paul I, he became Pope John Paul II, the youngest Pope in the history of Rome. On October 22, 1978, his papal inauguration ceremony was organized. 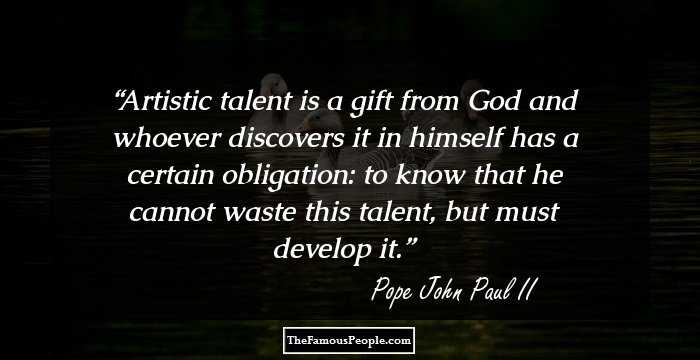 As the Bishop of Rome, he visited almost 129 countries, including Mexico, Cuba, Ireland, United Kingdom, Egypt, and Jerusalem. He was later given the name ‘Pilgrim Pope’ for his extensive travels.

He is also credited for catalyzing the decline of communism in Central and Eastern Europe. In June 1979, he visited his homeland Poland, where he was welcomed by an ecstatic crowd. This trip uplifted the spirit of the nation and instigated the solidarity movement of 1980.

During his visit to Haiti on 9 March 1983, he bluntly criticized the poverty of the country which inspired massive protests against the ruling government. Soon, the dictatorial rule of Jean-Claude "Baby Doc" Duvalier came to an end.

In May 1999, he visited Romania, thus becoming the first Pope to visit an Eastern Orthodox country since the Great Schism in 1054. In 2001, he traveled to Kazakhstan to celebrate the 17,000 years of Christianity.

From 23 to 27 June 2001, he visited Ukraine, an orthodox nation, upon the invitation of the President of Ukraine and bishops of the Ukrainian Greek Catholic Church. He also visited Greece in 2001, the first Pope to do so in 1291 years.

Though making a visit to Russia was one of his greatest dreams, it never materialized. However, he tried unrelentingly to solve the conflicts between Catholic and the Russian Orthodox churches.

He went to great lengths to improve the sour relationship with Islamic leaders and was the first Pope to pray in an Islamic mosque (Umayyad Mosque) in Damascus, Syria, where John the Baptist is believed to have been interred.

He even kissed the Holy Quran in Syria which made him immensely popular with the Muslims, though it upset the Catholics.

He also maintained a healthy rapport with the Buddhists and met Tenzin Gyatso, the 14th Dalai Lama, eight times.

From 15 to 19 November 1980, he visited Germany, a country with a huge Lutheran population, and met the leaders of the Lutheran and other Protestant Churches.

The relationship between Christianity and Judaism improved during his pontificate, mainly due to his visits to the Auschwitz concentration camp in Poland and the Great Synagogue of Rome on 13 April 1986. He also set up diplomatic relations with the State of Israel.

On 7 April 1994, he hosted ‘The Papal Concert to Commemorate the Holocaust,’ the first ever event in Vatican dedicated to the memories of the six million Jews murdered during ‘World War II.’

On 31 October 1999, the representatives of Vatican and the Lutheran World Federation (LWF) signed a joined Declaration as a gesture of unity.

On 13 May 1981, when he entered the St. Peter’s Square to address the audience, he was shot by Mehmet Ali Ağca, an expert Turkish gunman belonging to the militant fascist group ‘Grey Wolves.’ The Pope was seriously injured and was taken to ‘Gemelli Hospital’ where he underwent a five-hour surgery.

The second assassination attempt occurred on 12 May 1982, in Fatima, Portugal when an assailant tried to stab John Paul II with a bayonet. The assailant was Spanish priest Juan María Fernández y KrohnMar who claimed that the Pope was an agent of the Communist Moscow.

Controversies
Some catholic theologians opposed his canonization because of his views on sexual reproduction and ordination of women.

He was criticized for supporting the Opus Dei prelature and the canonization of its founder Josemaría Escrivá, whom he called 'the saint of ordinary life.’

He was harshly criticized by doctors and AIDS activists for his views on artificial birth control and the usage of condoms to prevent the spreading of HIV.

�In Third World Countries, he was accused of allegedly using social and charitable programs as means to convert people to Catholicism.

‘Crossing the Threshold of Hope,’ written in 1994, is one of his most important books. Originally written in Italian, the book sold millions of copies, with one million copies sold in Italy alone. It has been published in 40 languages.

‘Memory and Identity: Conversations at the Dawn of the Millennium’ is one of his most remarkable works. This work chronicles the rise of Nazism and communism in Europe.

‘The Theology of the Body - Human Love in the Divine Plan’ is also one of his most notable works. The book is based on Jesus' conversation about the legitimacy of divorce with the Pharisees in ‘Mark 10.’

He was awarded the ‘Presidential Medal of Freedom,’ America’s highest civilian honor, by President George W. Bush at a ceremony held in the Apostolic Palace on the 4th of June 2004.

On May 1, 2011, he was beatified, which is third among the four steps leading towards canonization.

In 2001, he was diagnosed with Parkinson’s disease, the news was officially acknowledged by Vatican in 2003. He also had difficulties in speaking and hearing and also suffered from osteoarthritis.

Starting from February 1, 2005, he was in and out of hospital. On 2 April, he spoke his final words, "Allow me to depart to the house of the Father" before slipping into a coma.

He passed away in his private apartment on 2 April 2005 due to heart failure from profound hypotension and circulatory collapse from septic shock, 46 days prior to his 85th birthday.

The pontiff’s funeral witnessed one of the largest gatherings in the history, surpassing the gatherings for the funerals of Winston Churchill and Josip Broz Tito.

Following his death, clergies at the Vatican as well as the clergymen all over the world started referring to him as ‘John Paul the Great,’ making him only the fourth Pope ever and the first in the millennium to receive the honor.

On May 3, 2011, his remains were reinterred in a marble altar in Pier Paolo Cristofari's Chapel of St. Sebastian, where Pope Innocent XI was buried.

He is the only Pope to have been portrayed in a comic book by ‘Marvel Comics.’

This Pope asked his students to call him ‘Wujek’ (Polish word for ‘uncle’) as priests in Poland were restricted from traveling with their students. This nickname remained with him and became popular among his followers.