Richard Walter Jenkins, who later became ‘Richard Burton’ after getting adopted by his teacher and theater coach Philip H. Burton, was a world renowned Welsh theater and movie actor. He was born and brought up in Wales in a poor family to a coal miner. Since his young age, he was interested in acting and doing theater, which made him popular in his school. He dropped out of the school when he was 16 and went to join the Air Training Corps. After his stint with the military service, he took to theater and acting quite seriously and landed roles in English movies and West End productions. His growing popularity took him to Hollywood where he got wonderful opportunities to exhibit his acting talents in many movies, theater, Broadway musicals and on television. His most famous Broadway performance was ‘Hamlet’ which is also the longest running theater in the world until now. He received many Oscar nominations, two Golden Globe Awards, two Tony Award, a Grammy Award and an Emmy nomination for the variety of roles that he played all through his creative career. He was married five times in his life, twice to the famous actress Elizabeth Taylor, with whom his marriage had remained controversial and open to media’s criticism.
Continue Reading Below

Cause of Death: Intracerebral Hemorrhage

Welsh Celebrities
Welsh Actors
Scorpio Actors
Welsh Film & Theater Personalities
Scorpio Men
Childhood & Early Life
Richard Burton was born in Pontrhydyfen, Neath Port, Talbot, Wales, in a working class household to Richard Walter Jenkins and Edith Maude. His father was a coal miner who was a gambler and an alcoholic.
His mother passed away when he was 2 years old and he and his other 11 siblings were taken care of by his sister Cecilia and her husband Elfed. Burton studied at a grammar school and was good at English, Welsh and rugby.
He took part in theater at school and did extremely well in it. One of the school productions was ‘The Apple Cart’ and he received an Eisteddfod prize for excellence in theater. He dropped out of the school at 16.
He worked for the local wartime Co-operative committee and later became a cadet at the Port Talbot Squadron of the Air Training Corps. At the same time he joined the youth drama club where he learnt the fundamentals of acting.
His school teacher was also at the Air Training Corps and adopted him, became his guardian and sent him back to the school. He worked on him and helped him enhance his talents. At 18, he was admitted into Exeter College, Oxford.
He went back to serve the military service as an air force cadet, after 6 months at Exeter. After this, for almost 3 years, Burton was in the RAF, serving as a navigator. He could not become a pilot because of his poor eyesight. 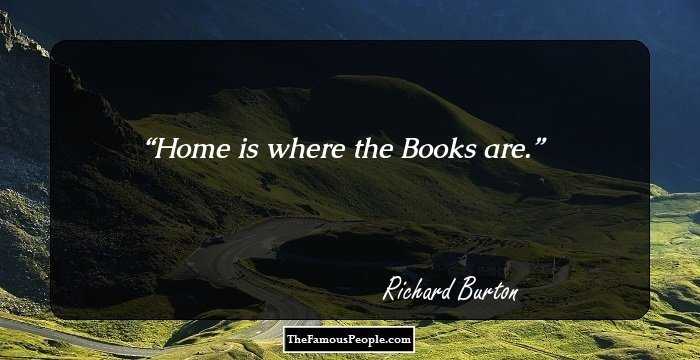 Quotes: Home, Books
Continue Reading Below
You May Like

Famous Beautiful Women With Green Eyes
Career
In 1947, Burton left the military services and started working on his career in theater by signing up with a theatrical agency. He did his first motion movie ‘The Last Days of Dolwyn’ for which he received praise of the critics.
From 1948-1950, Burton did movies and theater side by side. He did West End production ‘The Lady’s Not For Burning’ and did British movies like: ‘Now Barabbas Was A Robber’, ‘Waterfront’, ‘The Woman With No Name’ and ‘Green Grow the Rushes’.
In 1951, Burton came into the notice by giving a successful performance at Stratford in ‘Henry IV Part I’. He did the role of Prince Hal opposite Anthony Quayle.
In 1952, after signing a contract with Alexander Korda for 5 years, Burton appeared in his first Hollywood movie, ‘My Cousin Rachel, starring opposite Olivia de Havilland. For this movie, 20th Century Fox borrowed him from Korda.
In 1953, Burton did ‘Desert Rats’ along with James Mason. He played the role of a young English captain amid the World War II. After the movie, he became good friends with Mason, who introduced him to the Hollywood Crowd.
Around same time, his movie ‘The Robe’ was released. He received 7 Oscar nominations for the movie and it was among the first movies that premiered on CinemaScope. The movie was a Biblical blockbuster.
In 1954, Burton did the narration of Dylan Thomas’ ‘Under Milk Wood’ on the radio and became famous for it as his voice and oration was highly acclaimed by critics and audiences. Later, he also did narration for ‘The Valiant Years’.
From 1955-1957, Burton did movies like: ‘Prince of Players’, ‘Alexander the Great’, ‘The Rains of Ranchipur’ and ‘Sea Wife’. None of these movies did very well on the big screen and Burton received negative criticism.
In 1958, Burton did the movie version of John Osborne’s play ‘Look Back in Anger’ with the same title, directed by Tony Richardson. It did not do well at the box office and neither did his next 2 movies - ‘The Bramble Bush’ and ‘Ice Palace’.
Continue Reading Below
From 1955-1960, Burton took to theater and Broadway besides movies. He did the famous roles of ‘Coriolanus’, ‘Lago’ and ‘Othello’ at the Old Vic theater. He also did musicals like: ‘Time Remembered’, ‘Camelot’ and ‘My Fair Lady’.
In 1963, Burton did ‘Cleopatra’, a 20th Century-Fox production, which was considered to be the most expensive movie of that time. Burton again became a success story in Hollywood. He also did a movie called ‘The V.I.P.s’.
In 1964, Burton did ‘Hamlet’ for the Broadway at the Lunt-Fontanne Theatre. It is the longest running theatre in the history of Broadway, with its 136 performances. He received a Tony Award for his impeccable version of Hamlet.
In 1964, ‘The Night of the Iguana’, a film based on Tennessee Williams’ play with the same title, was released. His acting in the movie was acclaimed by the critics. He did ‘The Spy Who Came in from the Cold’ around the same time.
In 1965, Burton did a movie called ‘The Sandpiper’ opposite his new second wife and actress Elizabeth Taylor. In the following year, they did another movie together, a film adaptation of Edward Albee’s play, ‘Who’s Afraid of Virginia Woolf?’
From 1967-1969, Burton did movies like: ‘The Taming of the Shew’, ‘The Comedians’, ‘Boom!’, ‘Doctor Faustus’, and ‘Staircase’. He also did blockbuster hits like: Clint Eastwood’s ‘Where Eagles Dare’ and ‘Anne of the Thousand Days’.
From 1972-1977, for financial reasons, Burton did average movies like: ‘Bluebeard’, ‘Hammersmith Is Out’, ‘The Klansman’, ‘Exorcist II: The Heretic’, etc. He also did a film adaptation of his Broadway ‘Equus’, for which he received the Golden Globe Award.
In 1978, He did the narration for Jeff Wayne’s musical version of ‘The War of the Worlds’. He also did movies like: ‘The Wild Geese’, which was an international box office hit and ‘The Medusa Touch’, which was critically acclaimed.
From 1980-1984, Burton did movies like: ‘Circle of Two’, ‘Wagner’, ‘Nineteen Eighty-Four’, etc. He also did an American miniseries ‘Ellis Island’, for which he received an Emmy Award nomination. It was his last TV performance.
Continue Reading Below 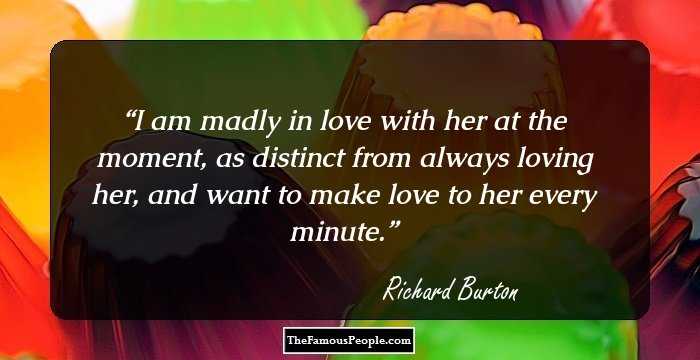 Quotes: Love, I
Awards & Achievements
Burton received many awards and nominations for his acting in movies, Broadway and television. He received 2 Golden Globes for his movies ‘My Cousin Rachel’ and ‘Equus’. He received a BAFTA for ‘Who’s Afraid of Virginia Woolf’.
For his epic theatrical performances, he received 2 Tony Awards––one for the musical ‘Camelot’ and second as a Special Award. He was also the winner of a Grammy Award for ‘The Little Prince’ in the category of Best Children’s Recording.
Personal Life & Legacy
In 1949, Burton got married to the Welsh actress and producer Sybil Williams. They both had two daughters together––Katherine Burton and Jessica Burton. The couple got divorced after 14 years of being married.
In 1964, he got married to his co-star Elizabeth Taylor. They both married each other twice; their first wedding was in Montreal, Canada and second in Botswana. Their marriage was always under media speculation.
In 1976, shortly after his divorce with Elizabeth Taylor, Burton got married to model Suzy Miller (who was married to the Formula 1 Champion James Hunt), but got divorced within 6 years of their marriage.
From 1983, until his death, Burton remained married to a make-up artist Sally Hay. He moved to Switzerland with her in order to run away from the heavy taxes.
In 1984, Burton died of brain hemorrhage in Celigny, Switzerland, where he was living with his fifth wife, Sally Hay, as a tax exile. He was 58 at the time and suffered from various diseases prior many years to his death.
Trivia
This Hollywood actor was a heavy alcoholic and used to drink 3 bottles of vodka every day. He explained it as his way to deal with the dullness of life after an actor gets down from the stage. He was also a chain smoker and used to smoke 3-5 packs of cigarettes each day.
He suffered from many medical conditions like: arthritis, dermatitis, cirrhosis of liver and kidney disease. He was admitted to hospital many times because of his alcohol addiction. He used to limp towards the end of his life.
Burton’s marriage with Elizabeth Taylor was affected after they did ‘Who’s Afraid of Virginia Woolf’ together. He publicly denied it as ‘absolute nonsense’ that Taylor was the most beautiful woman in the world and said that she had a double chin and an overdeveloped chest.
This Hollywood actor publicly accepted that he had tried homosexuality and claimed that everyone in the industry tries it at one point or the other.
Burton was an atheist.
His older brother, Ifor, fell at Burton’s home in Switzerland and became paralyzed. Burton blamed himself for the accident and started drinking all the more heavily after that.

Golden Globe Awards
BAFTA Awards
Grammy Awards
You May Like

See the events in life of Richard Burton in Chronological Order