(One of the Best Actresses of Classic Hollywood Cinema)

The phrase ‘talented beauty’ best depicts Elizabeth Rosemond Taylor and her life. While it was her stunningly beautiful face and magnetic appeal that drew her to the world of showbiz, her prolific career that spanned over six decades was due to her great performance, exceptional talent and inherent creativity. A performer by birth, acting was an intrinsic part of the personality of this beautiful actress. She took on the robes of an actress even before she had hit the double digit of her age and rest as they say is history. By the time she entered teenage, she was a star in her own right with the biggest hit of the year, ‘National Velvet’ in her kitty. While journalists adorned her with the title of ‘precious jewel of Hollywood’, directors and fellow actors referred to her as ‘One-Shot Liz’ for her ability to shoot a scene in one take. What is interesting to note in her career graph is that unlike other artists, the transition from a child actor to an adolescent star and from an adolescent star to a mainstream actress was a smooth and seamless one. She left an indelible mark in all the three phases of her career with movies, which have gained a cult status and are deemed as ‘classics’ today. American Celebrities
British Celebrities
American Women
British Women
Pisces Actresses
British Actresses
Childhood & Early Life
Elizabeth Rosemond Taylor was born in London to American parents Francis Lenn Taylor and Sara Sothern. Both of them were art dealers in London. At the outbreak of World War II, they returned to US along with young Elizabeth.
While her mother was an actress before her marriage, young Elizabeth started training herself at ballet when she was just three. She even gave a recital for Princesses Elizabeth and Margaret.
Her charismatic face, breathtaking beauty and attractive looks made Hollywood as the ultimate destination. Following the advice of several people, she applied for a screen test.
Interestingly, the Hollywood giants, Universal and MGM both were willing to place her under contract due to her angelic looks and striking appeal. However, Universal edged past MGM and secured her by offering a seven year contract without even waiting for a screen test! 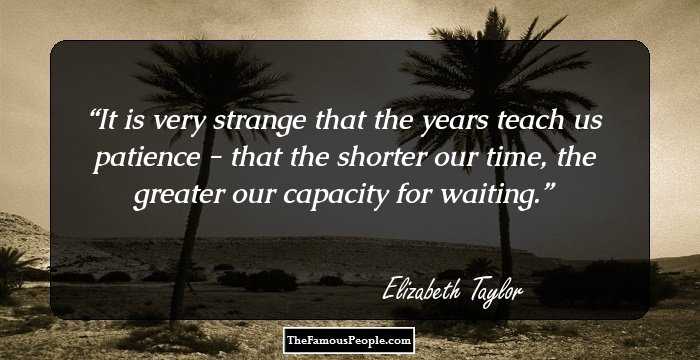 Quotes: Time
Continue Reading Below
Career
At the age of nine, she started filming for her debut motion picture, ‘There’s One Born Every Minute’, which released in 1942. Her contract with Universal studio was broken as she was fired after the film.
She then gave a screen test for the MGM. Passing the same, she was offered a long term contract with the studio. Her first film under the MGM banner was the 1943 release, ‘Lassie Come Home’. The film was received exceptionally well at the box office.
Next, she was featured as Helen Burns in the remake of the Charlotte Brontë novel ‘Jane Eyre’. In 1943, she starred in the MGM production, ‘The White Cliffs of Dover’.
While her earlier films were a success, the real breakthrough came with, ‘National Velvet’, which released in 1944. Cast opposite Mickey Rooney and Angela Lansbury, the film garnered immense success grossing about $4 million.
The success of ‘National Velvet’ led her being the natural choice for the 1946 animal film, ‘Courage of Lassie‘. The movie replicated the success story.
In 1947 and 1948, she gave powerful performance is a number of movies, which established her reputation as an adolescent actor. The last film which portrayed her in an adolescent role was the American classic, ‘Little Women’.
During her teenage years, she wished to give up acting and lead a normal life, just like other children and be educated. However, her mother resented and rebuked the idea
The transition from an adolescent to an adult was seamless for this stunningly beautiful and talented lady. Her first film as an adult was ‘Conspirator’. Though the film bombed at the box office, her performance was praised by critics.
The year 1950 marked the release of the comedy ‘The Father of the Bride’. Cast alongside Spencer Tracy and Joan Bennett, it was her first successful movie as an adult.
Continue Reading Below
The 1951 release, ‘A Place in the Sun’ revolutionised American cinema and catapulted her position further. She was extolled and admired for her commendable performance by both audience and the critics
Post the glorious success of ‘A Place in the Sun’, she starred in some of the forgetful projects such as ‘The Barefoot Contessa’, ‘I'll Cry Tomorrow’, ‘Callaway Went Thataway’, ‘Love Is Better Than Ever’ and ‘Rhapsody. The films failed terribly at the box office.
The 1954 released film, ‘The Last Time I Saw Paris’ was the only saving grace for the downward leap that her career graph had taken. The film was somewhat successful at the box office.
Her yearning for a substantial role ended with George Stevens' epic ‘Giant’, which released in 1956. Following this, she was seen in successful films including ‘Raintree County’, ‘Cat on a Hot Tin Roof’, ‘Suddenly, Last Summer’ and ‘BUtterfield 8’.
‘BUtterfield 8’ was her last film under the MGM contract which lasted for 18 years. The row of successful films made her edge to the Top Ten list of successful actors, a position she retained for the next decade as well.
In 1966, she played the lead role in the movie ‘Who's Afraid of Virginia Woolf?’ opposite Robert Burton. Her portrayal of the character of Martha was wholesomely appreciated for the authenticity she brought to it.
Post the magnificent success of ‘Who's Afraid of Virginia Woolf?’, she starred alongside Burton in several box-office blockbusters including ‘The V.I.P.s’, ‘The Sandpiper’ and ‘The Taming of the Shrew’. The films garnered a total of $200 million at the box office.
However, with the end of the decade, several of her movies flopped at the Box Office. Some of these were ‘Doctor Faustus’, ‘The Comedians’, ‘Boom!’, ‘Reflections in a Golden Eye’ and ‘The Only Game in Town’.
The decade of 1970s saw her in theatrical films and made-for-TV movies. In 1980s, she jumped back to the big screen with the movie, ‘The Mirror Crack’d’. She was later seen in ‘Malice in Wonderland’ and ‘Poker Alice’.
Continue Reading Below
‘The Flintstones’, released in 1994, was her last theatrical film. Towards the end of the 1990s and the beginning of the new century, she featured in a number of television series, soap operas and animated series.
In 2007, she was paired opposite James earl Jones in the A. R Gurney’s play, Love Letters. The play was essentially staged to raise funds for the AIDS Foundation. 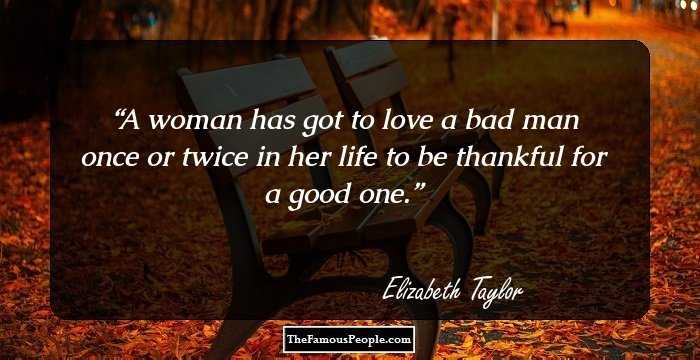 Quotes: Life, Love
Major Works
Her first major breakthrough on the big screen was with the movie ‘National Velvet’. The film was widely appreciated and grossed about US$4 million at the box office.
Her films with Burton, ‘Who's Afraid of Virginia Woolf?’, ‘The V.I.P.s’, ‘The Sandpiper’ and ‘The Taming of the Shrew’, were box-office blockbusters. They garnered immense positive reviews and amassed about US $200 million at the box office.
Awards & Achievements
In her lifetime, she was felicitated numerous times for her outstanding contribution to cinema. She twice won Academy Awards, a Golden Globe award, BAFTA Award, and Screen Actors Guild Award.
She was conferred with the prestigious French Legion of Honor in 1987 and was named Dame Commander of the Order of the British Empire three years later. In 2001, she received the Presidential Citizens Medal. Later in 2007, she was inducted in the California Hall of Fame. 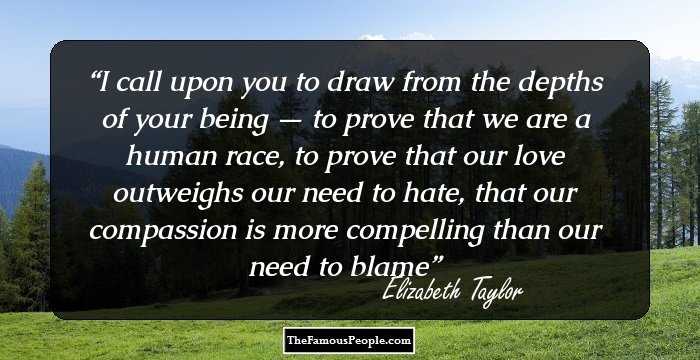 Quotes: You, Love, Need, I
Personal Life & Legacy
She walked down the aisle eight times with seven husbands. Conrad ‘Nicky’ Hilton was the first and was followed by Michael Wilding, Mike Todd, Eddie Fisher, Richard Burton, whom she married twice, John Warner and Larry Fortensky.
Despite her extravagant list of husbands, she had affairs and extra marital relations with important men and eminent personalities including Glenn Davis, Howard Hughes, Frank Sinatra, Henry Kissinger, and Malcolm Forbes.
She was blessed with three children, including two sons and one daughter and an adopted girl child Maria.
She faced serious medical issues since 1950s. She had undergone 20 major operations and was hospitalized at least 70 times. In 2004, she was diagnosed with congestive heart failure. Five years later, she underwent a cardiac surgery. In 2011, she breathed her last after suffering from heart failure.
She was interred at Forest Lawn Memorial Park in Glendale, California, in a private Jewish ceremony.
Trivia
This talented violet-eyed actress of Hollywood gave some unforgettable hits as an adolescent star and mainstream actress including ‘National Velvet’, ‘‘Who's Afraid of Virginia Woolf?’ and ‘BUtterfield 8’.

Quotes By Elizabeth Taylor | Quote Of The Day | Top 100 Quotes

See the events in life of Elizabeth Taylor in Chronological Order