Raymond Chandler is regarded as the master of crime and pulp fiction genre and most of his works are considered to be literary classics. In his works, he offers a graphic picture of the crime world of Los Angeles of the 1930s. Though he started as a short story writer inspired by Dashiell Hammett, a hugely successful pulp fiction writer, he progressed to writing novels, which were later made into motion pictures, some of them, many times over. The adaptations of his novels to screen proved that it is possible to sustain the suspense and hold the audience interest. Though his narrative style was racy, Philip Marlowe, the fictional detective character he created, was an emotional and principled man. Another significant feature of the writer’s novels was that it was laced with similes that upped the work to the stature of literary classics, from being mere works of pulp fiction. He was thus able to retain the existing formula that the publishers demanded and at the same time take it to a higher level. Though the writer is held in awe today, some of his contemporary critics described his style as rambling and incoherent. They objected to his treatment of blacks and homosexuals in his works.

George Orwell
Novelists #94
Screenwriters #374
Writers #197
Continue Reading Below
23rd July In History
DID WE MISS SOMEONE?
CLICK HERE AND TELL US
WE'LL MAKE SURE
THEY'RE HERE A.S.A.P
Quick Facts

Cause of Death: Pneumonial Peripheral Vascular Shock And Prerenal Uremia

American Celebrities
British Celebrities
Screenwriters
American Men
British Men
Leo Writers
Childhood & Early Life
Raymond Chandler was born on July 23, 1888, in Chicago to Maurice and Florence Chandler. His father, a railway engineer, was an alcoholic. Following the divorce, his mother took him along in 1895, to live in England to live with his grandmother.
He was admitted to Dulwich College in 1900. His teachers considered him bright, but somewhat absent minded. Here, he imbibed the English aristocratic values of honor, service and chivalry.
He did not attend college and preferred to hone his knowledge of foreign languages. With this in mind, he spent some time in Paris and Munich during his teenage years. 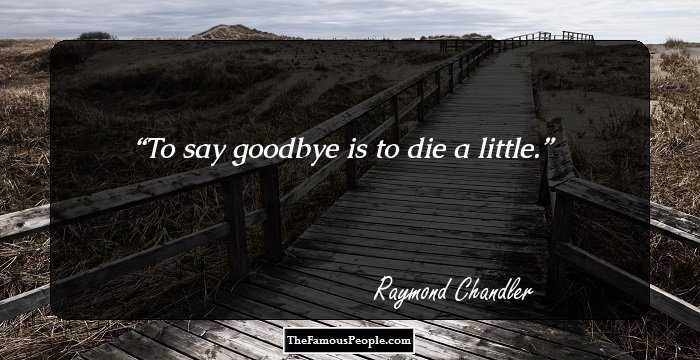 The Hottest Male Celebrities With The Best Abs
Career
Raymond Chandler returned to England and joined the civil services in 1907. He ranked third out of 800 candidates and topped the classics paper. He, however, found it difficult to fit into the bureaucracy.
He moved to the U.S in 1912 and tried his hand at many fields. During ‘The First World War’, he enlisted in the Canadian Expeditionary Force. He saw action in the trenches of France.
He joined the Dabney Oil Syndicate as an accountant. By 1933, he had risen to the post of Vice-President. However, he was fired from the company due to his alcoholism and absenteeism.
‘The Great Depression’ aggravated his financial crisis. He now took to his original passion of writing to supplement his meager income.
He began writing short stories—the first one to be published was titled ‘Blackmailers Don’t Shoot’. It appeared in 1933 in the celebrated pulp crime fiction magazine, ‘Black Mask’.
In 1934, two detective fiction short stories appeared in the ‘Black Mask’, titled ‘Smart-Aleck Kill’ and ‘Finger Man’. He admitted that the narrative style was crude, but it brought him the much needed money.
In 1935, two of his short stories in the crime genre made their mark, titled ‘Killer in the Rain’ and ‘Spanish Blood’. Both appeared in the ‘Black Mask’. ‘The Killer in the Rain’ became the title of a collection of his short stories.
‘Noon Street Nemesis’ was another of his short stories. It appeared in the ‘Detective Fiction Weekly’, in 1936.
In 1939, ‘The Bronze Door’, the writer’s first non-crime short story was published. The story featured detectives and unusual deaths, but the plot itself was not about criminal investigation.
Continue Reading Below
‘The Big Sleep’ was published in 1939. It launched the celebrated fictional detective Philip Marlowe. The novel had a complex plot with many twists and turns and intrigue.
His novel, ‘Farewell, My Lovely’ was adapted on the screen by many screen writers. In 1944, ‘Murder, My Sweet’, one of his many cinematic adaptations, featured Marlowe on the silver screen for the first time.
His novel ‘Professor Bingo’s Snuff’ was published in 1951; its main character inhales a magical snuff that makes him invisible. He then murders his wife, but later surrenders to the police. 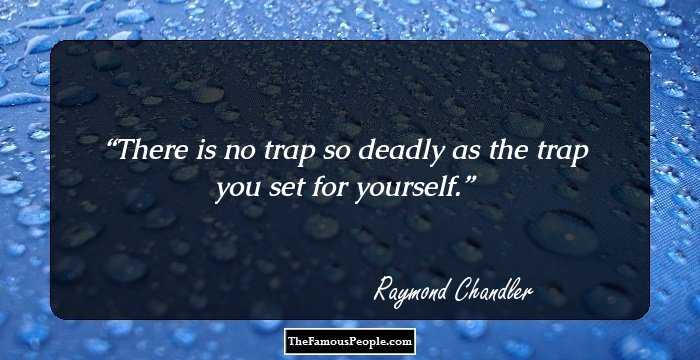 Quotes: You, Yourself
Major Works
He partnered with the film director Billy Wilder and wrote the screenplay for the movie, ‘Double Indemnity’ which was based on a novel of the same name penned by James M. Cain. It made a whopping $5,000,000 at the box office.
He wrote the original screenplay for the movie ‘Blue Dahlia’ in 1946. It was his first attempt at a screenplay which was not an adaptation of a novel.
‘The Long Good Bye’, published in 1953, is considered his autobiographical sketch which reflected the emotional upheaval that the writer experienced during his wife’s illness and her eventual death, his problems with alcohol and his suicide attempt.
Awards & Achievements
Raymond Chandler was awarded the ‘Mystery Writers of America’s Edgar Award’ twice, for ‘The Blue Dahlia’ in 1946, and for ‘The Long Goodbye’ (1955).
He was nominated for the Oscars in the ‘Best Screen Play’ category for ‘Double Indemnity’ in 1945 and a year later for ‘The Blue Dahlia’. 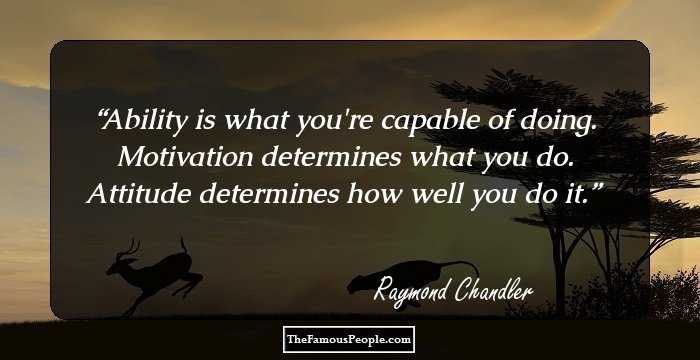 Quotes: You
Personal Life & Legacy
He became romantically involved with a married woman, Cissy Pascal and married her after her divorce, in 1924. She was a model and eighteen years his senior. For most part, their relationship was strained, but they were emotionally reconciled to each other.
Though he was linked with many women, Raymond Chandler loved his wife dearly. When she died in 1954, he was driven deeper into alcoholism and depression. His loneliness even drove him to attempt suicide.
He died of pneumonia on March 26, 1959, at the Scripps Memorial Hospital. His literary agent Helga Greene with whom he was linked, inherited Chandler's $60,000 estate, after winning a 1960 lawsuit.
Trivia
This famous author appeared in a brief cameo in ‘The Double Indemnity’ towards the end of the film. The writer is seen sitting in a chair outside the office of a character.
Though this prominent writer was born in America, he became a naturalized British citizen. He, however, became a U.S citizen again, in 1956.
Recommended Lists:
Film & Theater Personalities #5618
You May Like

Quotes By Raymond Chandler | Quote Of The Day | Top 100 Quotes

See the events in life of Raymond Chandler in Chronological Order