(Known for His Performance in the Sitcom 'The King of Queens')

Patton Oswalt is an American stand-up comedian and actor. He has appeared in several successful comedy shows and films. He has also released his own popular comedy albums. Comedy did not seem to be the most likely choice for Patton whose father was a Marine Corps officer, but comedy is what he was destined to make. As a youngster, he would read many comic books and watch horror movies. He also developed a taste for comedy as a child and drew inspiration from the likes of Steve Martin, Richard Pryor, and Jonathan Winters. He began writing and performing comedy while at high school and soon realized that comedy was his life’s calling. His career as a stand-up comedian began while he was still in college; he began performing comedic acts in small-time clubs. By chance, he met Blaine Capatch who would become his long term friend and business collaborator. Along with Capatch, he moved to Los Angeles to try his hand at writing and performing comedy. At first, he landed only small roles in television programs. Gradually, he began getting more substantial roles; his big break came when he was selected to play ‘Spence Olchin’ in ‘The King of Queens.’ From then on, his career began to move upwards and he went on to become the successful comedian he always wanted to be. Patton Oswalt was born on January 27, 1969, in Portsmouth, Virginia, USA, to Larry Oswalt and his wife Carla. Larry was a U.S. Marine Corps Officer and the family used to move a lot because of his career.

He attended ‘Broad Run High School’ in Virginia and graduated in 1987. He was enrolled at the ‘College of William and Mary’ where he majored in English and earned his degree in 1991.

While still at college, he performed his first stand-up routine at an open mic in Washington, D.C. in 1988. He soon began performing comedy at small clubs in Virginia, Maryland, and Washington D.C. 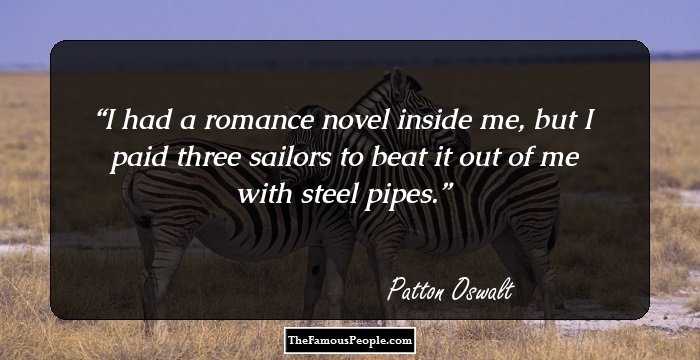 Quotes: Me, I
Continue Reading Below
Career

While performing at the clubs, he met aspiring comedian Blaine Capatch and both became good friends. The duo traveled to San Francisco in 1992 to try their luck there. From San Francisco, they went to Los Angeles in 1994.

Oswalt landed a job as a writer in the new comedy show ‘MAD TV’ in 1995. He worked there for two seasons before appearing in ‘HBO Half Hour Comedy Hour’ in 1997.

He got his big breakthrough when he was cast as ‘Spencer "Spence" Olchin,’ a supporting character, in the highly popular sitcom ‘The King of Queens’ in 1998. He played this role in 122 episodes till 2007.

From 2003 to 2007, he voiced ‘Professor Dementor’ in ten episodes of the animated children’s television series ‘Kim Possible.’ During the 2000s, he also worked as a voice actor in several other television shows.

From 2004 to 2009, he voiced several characters, including ‘Dungeon Master,’ ‘Kenny Rogers,’ ‘Assassin,’ and ‘Boozehammer of Galen’ in the television comedy series ‘Reno 911!’

His comedy album ‘Werewolves and Lollipops’ was released in 2007 with a bonus DVD. The album received positive reviews and was called a classic comedy album.

After playing cameo roles in films during the 1990s and early-2000s, he got the opportunity to voice ‘Remy,’ an idealistic and ambitious young rat, in the animated comedy ‘Ratatouille’ in 2007.

He voiced several other characters, including ‘Tobey,’ ‘Robot,’ ‘4th Grader,’ and ‘Irate Driver’ in the animated children’s television series ‘WordGirl’ which premiered in 2007. The show is designed to teach children about the expansive English language and its vocabulary.

He appeared as ‘Neil’ in 21 episodes of the television comedy drama series ‘United States of Tara,’ which ran from 2009 till 2011. The show revolved around a suburban woman who copes with dissociative identity disorder.

His most memorable movie role was ‘Matt Freehauf’ in the comedy drama ‘Young Adult’ in 2011. The film also starred Charlize Theron. His role was highly appreciated and he won several awards and nominations.

Since 2013, he has been voicing ‘Adult Adam F. Goldberg’ in the period sitcom television series ‘The Goldbergs.’

He replaced Louis C.K. in the 2019 film ‘The Secret Life of Pets 2,’ where he voiced the main character ‘Max.’ 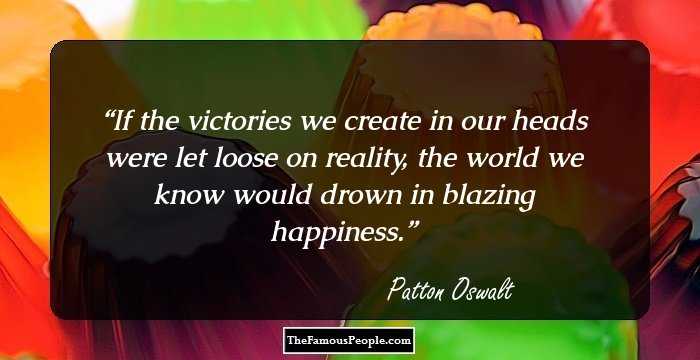 ‘Young Adult’ was his breakthrough movie in which he played the character of a partially disabled man. His performance was lauded and he received several awards and nominations. It is his most successful film so far.

He won the ‘New York Film Academy Award’ for ‘Best Supporting Actor – Comedy’ for portraying ‘Matt Freehauf’ in the film ‘Young Adult’ in 2011. 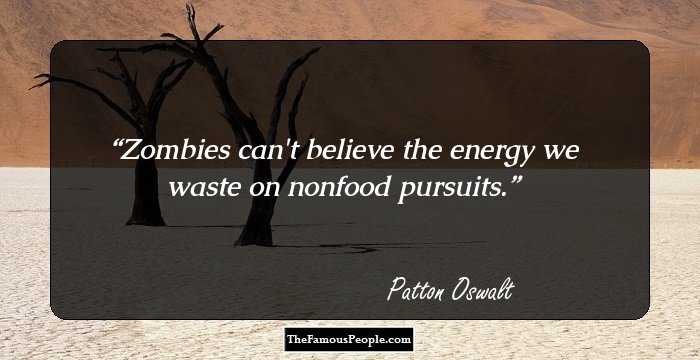 He married Michelle Eileen McNamara in 2005 and has a daughter with her. On April 21, 2016, McNamara died in her sleep in Los Angeles, California.

He worked with PETA in 2013 to protest against the practice of chaining pet dogs.

He has authored a book titled ‘Zombie Spaceship Wasteland.’

Quotes By Patton Oswalt | Quote Of The Day | Top 100 Quotes

See the events in life of Patton Oswalt in Chronological Order