The world famous host of the Christian News program, ‘The 700 Club’, Pat Robertson is an American media mogul who has also founded several major organizations. He is a Southern Baptist with conservative Christian ideals but what differentiates him from other Southern Baptists is his charismatic theology which is not common among the Southern Baptists. Born into a family of politicians he too aimed on making it big in politics. His father has been a powerful U.S. Senator and young Pat had served on President Ronald Reagan's Task Force on Victims of Crime. He even ran for the United States presidential election, 1988, but could not find success there. A religious man, he returned to Christian broadcasting which he had been involved in prior to the presidential elections. As a young man he had been interested in becoming a lawyer, but midway through his legal studies he had a religious awakening and decided to serve Christianity. He studied theology and became an ordained Southern Baptist minister. He founded the Christian Broadcasting Network (CBN) among the several other organizations he founded. He is also a wealthy businessman with media holdings all over the world. He is also famous for making predictions many of which don’t come true! 36
22nd March In History
DID WE MISS SOMEONE?
CLICK HERE AND TELL US
WE'LL MAKE SURE
THEY'RE HERE A.S.A.P
Quick Facts

American People
Lee University
Yale University
Washington And Lee University
Aries Entrepreneurs
Childhood & Early Life
He was born on March 22, 1930, into a political family in Virginia to Absalom Willis Robertson and Gladys Churchill. His father was a conservative Democratic United States Senator.
At birth he was named Marion Gordon Robertson. When he was a small child, his elder brother would pat him on the cheek and say “pat pat pat”. Thus he acquired his nickname, Pat.
He enrolled at the preparatory McDonogh School when he was 11. He later graduated from The McCallie School, Tennessee, in 1946. Eventually he earned a B.A. in History from the Washington and Lee University. 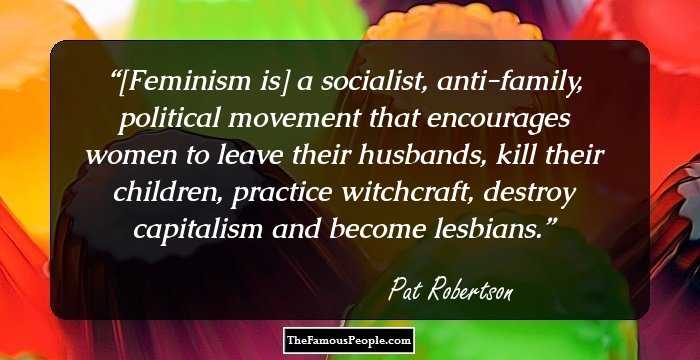 Quotes: Women, Children
Continue Reading Below
You May Like

The Sexiest Men Of 2020, Ranked
Career
In 1948 he drafted into the Army and was promoted to first lieutenant in 1952. After this he decided to get a law degree and enrolled at Yale Law School in 1955. But he couldn’t pass the New York bar exam.
Shortly thereafter he underwent a religious conversion and realized that his true calling was not to become a lawyer. He then went to the New York Theological Seminary and received a Master of Divinity degree in 1959.
He established the Christian Broadcasting Network in 1960 which was started as a small UHF station. Several years later he bought a Leased access cable TV channel in Hampton Roads which he called CBN.
In 1966, the television program ‘The 700 Club’ premiered in the Christian Broadcasting Network and was aired on each weekday. It is one of the longest running television programs in broadcast history.
In 1970 he established the CBN University on CBN’s Virginia Beach Campus and serves as its chancellor. The institution was renamed Regent University in 1989. A major public interest law firm associated with the university, American Center for Law & Justice was also founded by him.
He founded the non-profit organization ‘Operation Blessing International Relief and Development Corporation (OBI) in 1978. Headquartered in Virginia Beach, it has operations in 105 countries providing disaster relief, medical aid, clean water, etc.
He was also interested in politics and served on the Task Force on Victims of Crime during President Ronald Reagan’s administration in 1982. He campaigned to become Republican Party’s nominee in the 1988 presidential election but was unsuccessful
Over the years CBN became very popular and was broadcast in over 180 countries. Taking it forward, he founded the CBN Cable Network, later renamed as the CBN Family Channel.
The CBN Channel, meant to be a non-profit organization was becoming too profitable due to its popularity. Thus he formed the International Family Entertainment Inc. with the Family Channel as its main subsidiary in 1990.
In 1990 he founded the ABC Family Worldwide Inc. which is a distributor of family entertainment and information programming. The company was later taken over by The Walt Disney Company.
In 1997, the highly successful Family Channel was sold to the News Corporation and was renamed as Fox Family. As on today, the channel is owned by Disney and run as ‘ABC Family’.
Robertson is a successful businessman with media holdings in several parts of the world like Asia, the United Kingdom, and Africa. He signed a deal with the General Nutrition Center to sell a weight-loss shake he had created. He promoted his products on ‘The 700 Club”.
As a Christian minister he often claimed that God informed him of forthcoming events meant to happen in future. He made predictions of doomsday, natural disasters, terrorist attacks, economic crises, etc. But none of his predictions came true.
He was also famous for making controversial comments on topics like homosexuality and abortion. His comments on Hurricane Katrina, 9/11 Attacks, Haiti Earthquake, etc. earned him the wrath of the people.
Major Works
He is best known as the founder of the Christian Broadcasting Networking (CBN) which is a Christian oriented religious television network and production company.
Personal Life & Legacy
He married Adelia Elmer in 1954 and had four children. His son Gordon Robertson is also a broadcaster. Pat Robertson is the grandfather of several grandchildren.
Trivia
This famous Southern Baptist was presented an Ig Nobel prize for making several predictions about doomsday, terror attacks, and economic meltdowns that did not come true.
You May Like

See the events in life of Pat Robertson in Chronological Order