Papoose, born as Shamele Mackie, is an American rapper and songwriter. He began writing music at the age of eleven and received his first break at the age of 20 when he was chosen to make a guest appear in the solo album, ‘Roots of Evil’ by Kool G Rap. At the age of 21, he released his first number, ‘Alphabetical Slaughter’, also called ‘Thug Collection’. Although it created a fan base for him he failed to get recording opportunity and therefore to retain his fan base and to keep his name floating he started releasing mixtapes. So far, he has released 29 mixtapes, 11 singles and 2 albums. In addition, he has made guest appearance in 29 singles by other artists and a cameo appearance in a crime thriller movie. With his wife, Remi Ma, he has also appeared in the television show, 'Love & Hip Hop: New York'. Today, he is considered one of the most popular rappers in the world. 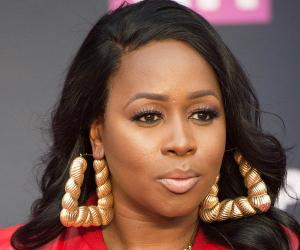 Taylor Swift
Rappers #340
Musicians #1503
Singers #1982
DID WE MISS SOMEONE?
CLICK HERE AND TELL US
WE'LL MAKE SURE
THEY'RE HERE A.S.A.P
Quick Facts

American People
American Men
New Yorkers Musicians
Male Rappers
Male Singers
Childhood & Early Years
Papoose was born on March 5, 1978 in Bedford-Stuyvesant, a neighborhood in Brooklyn, New York City. Very little is known about his family background except that he is of Liberian descent and that his mother’s name is Irene Mackie. According to some sources his father’s name is Gregory Hudgens.
Born as Shamele Mackie, he was called Papoose, meaning a Native American baby, by his grandmother, Vivian, because as a child he look liked one. Later, as he embarked on his musical career he continued with that name.
Nothing is known about his educational background or other childhood activities. However, brought up in Bedford-Stuyvesant, he is known to have shown interest in music early in his life, writing his first rap at the age of eleven. It is also known that he was very fond of his grandmother.
Continue Reading Below
You May Like

The Sexiest Men Of 2020, Ranked
Career
In 1998, Papoose got his first break, when he was introduced to Mafioso rap artist, Nathaniel Thomas Wilson, better known as Kool G Rap, by a music producer. Kool G Rap was then planning to cut a solo album, ‘Roots of Evils’ and was looking for fresh voices.
Believing that Papoose had the potential, Kool G Rap agreed to give him a chance. Subsequently, Papoose made a guest appearance in ‘Home Sweet Funeral Home’, the seventh song of the album, making an immediate impact. He was then just 20 years old.
In 1999, Papoose released his debut single, ‘Alphabetical Slaughter’. Very quickly, it went viral, forming the first steppingstone for his career and created a fan base for him. Subsequently, he signed a contract with a recording company; but when they failed to offer any recording opportunity, he cut ties with them.
To keep in touch with his fans, he now began producing mixtapes, releasing ‘Art & War’ in 2004. Later in the same year, he released three other mixtapes; ‘Street Knowledge’, ‘The Beast from the East’ and ‘Election Day’.
In 2004, Papoose presented one of his mixtapes to popular hip hop disc jockey, Keith Grayson, professionally known as DJ Kay Slay. By then, Kay Slay had formed Streetsweepers Entertainments in order to promote unsigned artists.
Impressed by his rendition, Kay Slay signed Papoose to Streetsweepers Entertainments. Concurrently, Papoose continued to create mixed tapes, releasing ‘A Moment of Silence’, ‘The Underground King’, ‘Sharades’, ‘Mixtape Murder’, ‘The Bootlegger’s Nightmare’, Bedstudy Do or Die’ and ‘Unfinished Business’ in 2005.
Continuing to produce, he released many more mixtapes including ‘The Best of Papoose – The Official Mixtape’ in 2006. In the same year, he made guest appearance in the remix of ‘Touch It’ by Trevor George Smith Jr, popularly known as Busta Rhymes, becoming famous for this work.
On August 24, 2006, he signed a contact with Jive Recording for $1.5 million, planning to publish an album called ‘The Nacirema Dream’. But the project got stuck and although the album was almost complete it was not released.
By September 2007, Papoose left Jive. He signed with Flipmode Squad and remained with them for next couple of years. This was also the time when his career started taking off; he went on a tour of Great Britain and Russia and got international acclaim and a large base of loyal fans.
Continue Reading Below
In 2008, Papoose appeared in a cameo role of a rapper in a crime thriller movie called ‘Righteous Kill’. Concurrently, he continued to create mixtapes, releasing ‘Build or Destroy’ in the same year.
'Build or Destroy' was followed by ’21 Gun Salute’ (2009), ‘Military Grind’ (2009), ‘Papoose Season’ (2010), ‘The Second Coming’ (2011), ‘King of New York’ (2011). In 2011, he also released his second compilation of mixtapes, ‘The Last Lyricist’.
On December 4, 2012, he released his most popular mixtape, ‘Most Hated Alive’. By then, he had made arrangement to release ‘The Nacirema Dream’ through Fontana Records. To promote the album, he released ‘On Top of My Game’, a single from the album, on December 11, garnering considerable interest.
On February 1, 2013, Papoose had the music video of ‘On Top of My Game’ premiered at 106 & Park, a hip hop and R&B music video show. Although it was decided that the album, ‘The Nacirema Dream’, would be released March 5, 2013, for certain reasons the date was pushed back for three weeks.
On its release on March 26, 2013, ‘The Nacirema Dream’ received generally positive reviews. His fans also lapped it up; it sold 5,442 copies in the first week and 3,000 more in the second. As on June 2015, it has sold 18,000 copies in USA alone.
On November 4, 2013, Papoose released his 27th mixtape, ‘Hoodie Season’. It was followed by ‘Hoodie Season 2’, released on January 30, 2014 and ‘Cigar Society’, released on March 5, 2014.
Papoose had his second studio album, ‘You Can’t Stop Destiny’ released on July 17, 2015. In the same year, he appeared in a supporting role in the television show, 'Love & Hip Hop: New York', a venture, which seeks to explore the role of women in the hip hop industry dominated by men.
Major Work
Papoose is best known for his debut album, ‘The Nacirema Dream’, released by Fontana Records on March 26, 2013. According him, the album is not just for entertainment. Contrarily, it reflects the story of his life, the trials and tribulations he had to go through to reach his position.
Personal Life & Legacy
On May 12, 2008, Papoose married Reminisce Mackie, professionally known as Remy Ma, in a court room, just before she went to jail for shooting a former friend over a financial dispute. They were scheduled to marry on April 27, but had to change their plans after the unfortunate incident.
Once Remy got out of the jail in August 2014, they resumed their married life. They had a ceremonial wedding in March 2016, eight years after their actual wedding in the courtroom.
Papoose has a daughter named Dejanie Mackie, born out of his liaison with another woman. He gained the custody of her daughter when she was a child. A budding artist and a musician, she is now studying in a university in New York.

See the events in life of Papoose in Chronological Order