Osvaldo Golijov is an Argentine ‘Grammy Award’-winning composer and music teacher. Since his mother was a piano teacher, music was a major part of his early years. In his childhood, he was influenced by classical and traditional music. After formally learning music, he became a music teacher. He also started composing music and performing at various venues across the globe. Some of his notable works were ‘Yiddishbbuk,’ ‘The Dreams and Prayers of Isaac the Blind,’ ‘Oceana,’ ‘Ayre,’ and ‘Ainadamar.’ For ‘Ainadamar,’ he won two ‘Grammys.’ He was appointed as the composer-in-residence for a lot of music venues and music festivals, such as the ‘Merkin Hall,’ the ‘Los Angeles Philharmonic,’ the ‘Ravinia Festival,’ and the ‘Holland Festival.’ He has had his share of controversies, too. He has often missed deadlines in the past, causing a lot of concerts to get postponed or canceled. He has also faced plagiarism allegations. 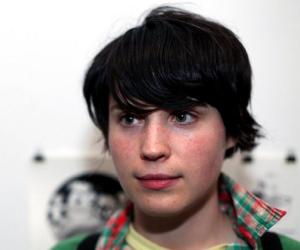 Geneviève Cast...
Musicians #4686
Continue Reading Below
DID WE MISS SOMEONE?
CLICK HERE AND TELL US
WE'LL MAKE SURE
THEY'RE HERE A.S.A.P
Quick Facts

Argentinian People
Argentine Musicians
Sagittarius Musicians
Sagittarius Men
Childhood & Early Life
Osvaldo Noé Golijov was born on December 5, 1960, in La Plata, Buenos Aires, Argentina.
His parents were Jewish and had immigrated from Romania. His father was a doctor, and his mother conducted piano classes.
During his childhood, he often listened to chamber music, klezmer music, Jewish liturgical music, and the nuevo tango of the popular Argentine musician Astor Pantaleon Piazzolla.
He learned to play the piano while growing up in La Plata. Under music director Gerardo Gandini’s tutelage, he mastered music composition.
Golijov left for Israel in 1983 and studied at the ‘Jerusalem Rubin Academy.’
In 1986, he joined the ‘University of Pennsylvania’ in Philadelphia, Pennsylvania, U.S., from where he eventually received his PhD.
Continue Reading Below
You May Like

The Hottest Male Celebrities With The Best Abs
Career & Acclaimed Works
Osvaldo was hired as a music teacher at the ‘College of the Holy Cross,’ famously known as ‘Holy Cross,’ in Worcester, Massachusetts, U.S.
In 1992, his work ‘Yiddishbbuk’ was played by the ‘St. Lawrence String Quartet’ of Canada.
‘The Dreams and Prayers of Isaac the Blind,’ inspired by the preachings and writings of Rabbi Yitzhak Saggi Nehor, was composed in 1994, for klezmer clarinet and string quartet.
His composition ‘Oceana’ made its debut at the ‘Oregon Bach Festival’ in 1996.Two years later, in 1998, he was made the composer-in-residence at the ‘Merkin Concert Hall,’ Manhattan, New York City, New York, U.S.
As the new millennium arrived, he composed ‘La Pasión Segun San Marcos’ for the project ‘Passion 2000,’ which commemorated the 250th death anniversary of renowned German composer and musician Johann Sebastian Bach.
In the new millennium, he also began creating music for movies, starting with composing for the 2000 Anglo-French drama ‘The Man Who Cried.’
In 2001, he finished ‘Three Songs for Soprano and Orchestra.’ Popular soprano Dawn Upshaw premiered this piece. The part ‘Lúa Descolorida’ from this set was added to ‘La Pasion Segun San Marcos,’ after it was repurposed and renamed ‘Peter’s Tears Aria.’ The same year, he was appointed as the composer-in-residence of the ‘Los Angeles Philharmonic’ Los Angeles, California, U.S., for the ‘Music Alive Series.’
In 2002, he composed ‘Tenebrae’ for soprano, clarinet, and string quartet. That year, he also took up the role of composer-in-residence for the ‘Ravinia Festival’ and the ‘Spoleto Festival.’ The former is the oldest music festival in the United States of America and is held at ‘Ravinia Park’ in Highland Park, Lake County, Illinois, and the latter is conducted in Charleston, South Carolina.
The next year, his first opera, ‘Ainadamar,’ premiered at ‘Tanglewood,’ a music venue in Lenox, Massachusetts.
Continue Reading Below
In 2004, he collaborated with Upshaw and ‘The Andalucian Dogs’ for the premiere of ‘Ayre,’ a song cycle for soprano and ensemble.
In 2006, he had another premiere at ‘Tanglewood,’ for his composition ‘Azul,’ for cello and orchestra (by Yo-Yo Ma). The same year, he was appointed as the composer-in-residence of the ‘Ojai Music Festival’ in Ojai, California.
In 2007, he composed the soundtrack of the internationally co-produced fantasy–drama film ‘Youth Without Youth.’ The same year, he was assigned as the composer-in-residence for the ‘Mostly Mozart Festival’ conducted in New York City. He was also made the “Loyola Professor of Music” at the ‘College of Holy Cross’ that year. From 2007 to 2010, he served as the composer-in-residence’ for the ‘Chicago Symphony Orchestra.’
In 2008, the ‘Saint Paul Chamber Orchestra’ of Saint Paul, Minnesota, U.S., performed his composition ‘She Was Here,’ an orchestration of Franz Peter Schubert’s four songs, for the first time. The same year, he worked as the composer-in-residence for the ‘Holland Festival’ held in Amsterdam, the Netherlands.
In 2009, he composed the soundtrack of the internationally co-produced movie ‘Tetro.’
In 2010, he worked on ‘Sidereus’ for a consortium of 36 orchestras. The following year, he wrote music for the horror film ‘Twixt.’
Between 2012 and 2013, he was made the “Debs Composer Chair” of ‘Carnegie Hall,’ a concert venue in Manhattan, New York City.
Awards & Honors
Osvaldo received the ‘Guggenheim Fellowship’ in 1995 and the ‘MacArthur Fellowship’ in 2003.
In 2003, ‘Yiddishbbuk’ was nominated for the ‘Grammy’ for the ‘Best Chamber Music Performance.’
Continue Reading Below
In 2006, ‘Ayre’ was nominated for the ‘Grammy’ for the ‘Best Classical Contemporary Composition.’
In 2006, Osvaldo was named the “Composer of the Year” by ‘Musical America,’ the oldest American magazine on classical music.
For ‘Ainadamar,’ he won two ‘Grammy Awards,’ one each for the ‘Best Opera Recording’ and the ‘Best Classical Contemporary Composition.’
Controversies
Osvaldo’s song cycle had to be removed from an event in 2010, as he did not complete it.
In 2011, he came under heavy criticism for several commissions that either fell behind schedule or were canceled. The premiere of a new string quartet for the ‘St. Lawrence Quartet’ in 2011 was postponed. He also missed the deadline for a violin concert for the ‘Los Angeles Philharmonic.’
In 2012, he failed to finish the composition for his performance in Berlin. He missed the deadline for a premiere at ‘Disney Hall’ in 2013.
He was accused of plagiarism by composer and critic Tom Manoff. The work in question was ‘Sidereus.’ However, Osvaldo defended his stand by claiming that he had sought permission from his collaborator Michael Ward-Bergeman, who had composed ‘Barbeich,’ the piece which Manoff claimed was the source of the plagiarized work.
Family & Personal Life
Osvaldo was initially married to Silvia. They had three children. Later, they separated legally.
He then married Neri Oxman, a famous architect and designer, but this marriage, too, ended in a divorce.
As of 2016, he stayed in Brookline, Norfolk County, Massachusetts, U.S.
Trivia
He once stated that Upshaw was his muse.
He has frequently collaborated with acclaimed filmmaker Francis Ford Coppola, composing music for his movies.

See the events in life of Osvaldo Golijov in Chronological Order