David Walter Foster, OC, OBC is a multi-Grammy-winning musician, composer, songwriter and arranger from Canada. For the majority of his almost five-decade long career, he has been one of the few key figures of modern western music to have influenced most, if not all, of its recent changes. A music prodigy, his education was carefully constructed to supplement his talent. Foster began to take piano lessons at the age of four and attended the University of Washington's music program nine years later. In 1974, he relocated to Los Angeles as a member of the band ‘Skylark’, and after the initial and unavoidable years of struggle, received his first Grammy Award in 1980. He has since created gold and platinum albums for the likes of Earth, Wind & Fire; Natalie Cole; Michael Bolton; Seal; Kenny Rogers; Dolly Parton; Chicago; Hall & Oates; Brandy; and ’N Sync and written timeless classic songs for several blockbuster films, including ‘The Bodyguard’; ‘Urban Cowboy’; and ‘St. Elmo’s Fire’. Between 2012 and 2016, he served as the chairman of Universal’s Verve Music Group, adding a new feather in his cap. Recently, he has joined ‘Asia’s Got Talent’s panel of judges. Tory Lanez
DID WE MISS SOMEONE?
CLICK HERE AND TELL US
WE'LL MAKE SURE
THEY'RE HERE A.S.A.P
Quick Facts

Canadian People
Pop Musicians
Record Producers
Canadian Men
University Of Washington
Childhood & Early Life
David Foster was born on November 1, 1949, in Victoria, British Columbia, Canada, as the only son of Maurice (Morry) Foster and Eleanor May Foster, née Vantreight. He has five sisters: Jaymes, Ruth, Jeanie, Maureen, and Marylou. His father worked as a maintenance yard superintendent to support their big family while his mother stayed at home and took care of them.
In 1963, he joined the University of Washington's music program. He became part of Chuck Berry’s backup band in 1966. Still a teenager, he travelled to England with the Victoria-based group ‘The Strangers’ and later came back to Toronto to work with Ronnie Hawkins. 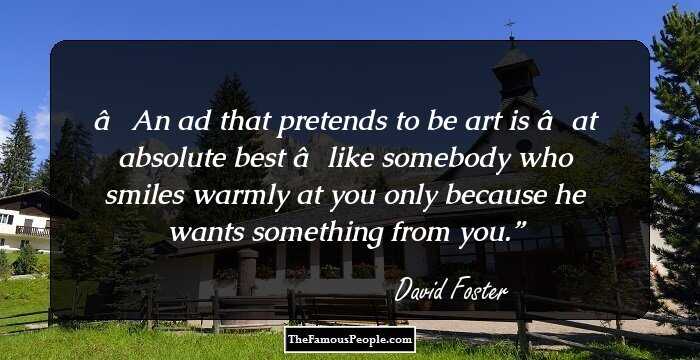 Quotes: Art
Continue Reading Below
Career
David Foster joined Skylark, a pop group, where he played the keyboard. They released their self-titled debut album in 1972. ‘Wildflower’, a song from the album became a top ten hit in 1973. The group disbanded in 1973 and Foster subsequently worked with George Harrison in the latter’s albums ‘Extra Texture’ (1975) and ‘Thirty Three & 1/3’ (1976), and contributed to Earth, Wind & Fire’s album ‘I Am’ (1979).
The 1980s was a busy decade for the musical maestro. He produced two albums for The Tubes: ‘The Completion Backward Principle’ (1981) and ‘Outside Inside’ (1983). He also played an important role in the rise of the American rock band ‘Chicago’, producing ‘Chicago 16’ (1982), ‘Chicago 17’ (1984), and ‘Chicago 18’ (1986). He closely worked with the band’s vocalist Peter Cetera in writing the chart-topping song ‘Glory of Love’ (1986).
In an article published in ‘Rolling Stone’ magazine in 1985, Foster was named “the master of... bombastic pop kitsch". In 1986, he received his first Oscar nod for ‘Glory of Love’. Sung by Cetera, the song was featured in ‘The Karate Kid Part II.’ Two years later, he composed the theme song for the XV Olympic Winter Games, titled ‘Winter Games’.
Foster and his then-wife Linda Thompson co-wrote ‘I Have Nothing’, which was sung by Whitney Houston in the film ‘The Bodyguard’ (1992). He entered into a contract in 1995 with Warner Brothers that helped him set up his own boutique label, 143 Records, with his then manager Brian Avnet serving as the chief executive.
He collaborated with Kenneth "Babyface" Edmonds in the composition of ‘The Power of the Dream’, the official song for 1996 Atlanta Olympics.
In 2001, he teamed up with Lara Fabian and the Vancouver Symphony Orchestra to produce English-language, French-language, and bilingual versions of Canada’s national anthem, ‘O Canada’.
He wrote ‘I’ll Make It Up As I Go’ with his daughter Amy Foster-Gilles. The song was used in the Robert De Niro and Marlon Brando starrer ‘The Score’ (2001). The father-daughter duo and Beyoncé composed the song ‘Stand Up for Love’, which became the anthem for the World’s Children’s Day.
Foster turned a new page in his career by taking over as the chairman of Universal’s Verve Music Group in the early 2010s. With the vision to turn the legendary jazz label into the premier label for both industry veterans and promising new talents, he welcomed Andrea Bocelli, Diana Krall, Natalie Cole, Sarah McLachlan and Smokey Robinson into the fold. He and Verve parted ways in 2016 following the record company’s reorganization.
He served on the reality competition show ‘American Idol’ as the guest mentor in April 2005, then made an appearance on ‘Nashville Star’ as a guest judge. He organised the PBS special titled ‘Hit Man: David Foster & Friends’ in December 2008. Foster and other well-known artists performed at the event.
Continue Reading Below
In 2011, he became part of Andrea Bocelli's live album, ‘Concerto: One Night in Central Park’. Since 2015, he has been on the panel of judges of ‘Asia’s Got Talent’. 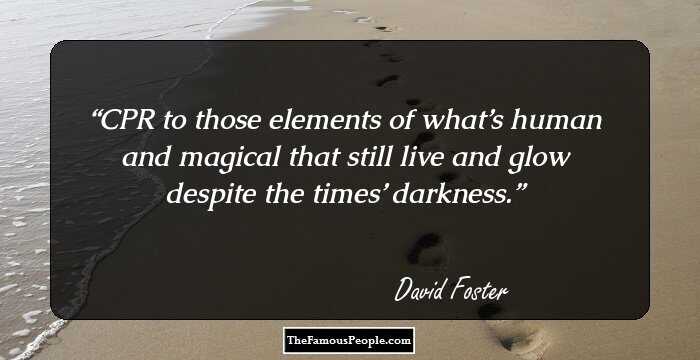 Major Works
David Foster collaborated with American singer Natalie Cole to produce the 1991 album ‘Unforgettable... with Love’ which did exceptionally well in the Pop, Jazz, and R&B markets, topping the US Billboard 200 and U.S. Billboard Top Jazz Albums charts and reaching #5 position on the U.S. Billboard Top R&B/Hip-Hop Albums chart.
It also won six Grammy Awards in 1992 and was pivotal in Foster’s claiming the Producer of the Year, Non-Classical accolade. As of 2009, the album has achieved RIAA 7x platinum certification.
Awards & Achievements
David Foster has received a staggering 47 Grammy nominations and won 16, including three Producer of the Year Awards.
He was conferred with the Order of British Columbia civilian honour merit in 1995 and the Order of Canada honour merit in 1998.
For ‘The Prayer’ from ‘Quest for Camelot’, he received Best Original Song Award at the 1998 Golden Globe Awards.
In 2003, he won the Primetime Emmy Award for Outstanding Original Music and Lyrics for ‘The Concert for World Children's Day’ (shared with Linda Thompson).
Foster was inducted into the Songwriters Hall of Fame in 2010.
He was granted a Hollywood Walk of Fame Star in 2013. 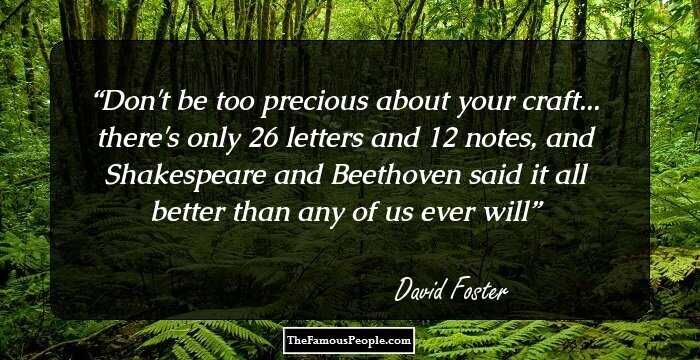 Personal Life
Married four times, David Foster is the father of five biological daughters and the grandfather of four granddaughters and three grandsons. His first child’s name is Allison Jones Foster who was born when Foster was 20 in 1970. He was forced to give her up for adoption right after birth. He wouldn’t meet her again for the next 30 years.
He married his first wife singer/writer B. J. Cook in 1972 and has a daughter named Amy Foster-Gillies (born 1973) with her.
After their divorce in 1981, he wed Rebecca Dyer on October 27, 1982. She gave birth to their daughters Sara in 1981, Erin in 1982, and Jordan in 1986. Foster and Dyer divorced in 1986.
In 1991, he married songwriter/lyricist Linda Thompson. The union lasted 14 years before their divorce in 2005. He found his fourth wife in Dutch model Yolanda Hadid, whom he wed on November 11, 2011 in an 11/11/11 themed ceremony. They filed for divorce in late 2015 and it was finalised in May 2017.
In 1985, Foster established The David Foster Foundation which focuses on providing financial support to Canadian families with children in need of life-saving organ transplant.
Trivia
Foster is close friend of Italian tenor Andrea Bocelli, who is his all-time favourite singer.

Quotes By David Foster | Quote Of The Day | Top 100 Quotes

See the events in life of David Foster in Chronological Order 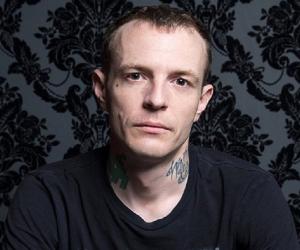