A highly accomplished jazz pianist with a long and illustrious career spanning six decades, Oscar Peterson is considered to be one of the greatest pianists of all times. He was an internationally renowned soloist who had also played with many of the best known musicians of his times. He was born into a musically inclined family and was encouraged by his father to learn music from a young age. He was brought up in an atmosphere heavily influenced by the jazz culture and started playing the trumpet when he was five. However, a bout of tuberculosis forced him to stop playing trumpet and he began playing the piano. This unexpected twist of fate directed him towards what would ultimately become his life’s calling. On recognizing his son’s genius his father arranged for him to attend classes with the renowned pianist Paul de Marky. Peterson started performing professionally while still in high school. He was deeply influenced by the musicians Teddy Wilson, Nat “King” Cole, and especially Art Tatum whom he considered his biggest inspiration. A chance meeting with the impresario Norman Granz led to not just a highly successful professional collaboration, but also a very profound personal connection. Over his career Peterson released over 200 recordings and was rightfully called ‘The Maharaja of the Keyboard’. Hélène Mercie...
Jazz Musicians #48
Pianists #145
Musicians #1990
Continue Reading Below
DID WE MISS SOMEONE?
CLICK HERE AND TELL US
WE'LL MAKE SURE
THEY'RE HERE A.S.A.P
Quick Facts

Canadian Celebrities
Canadian Men
Leo Musicians
Male Pianists
Male Musicians
Childhood & Early Life
He was born as one of the five children of Daniel Peterson and Olivia John who were immigrants from the West Indies to Canada. His father worked as a porter for the Canadian Pacific Railway.
He grew up in a predominantly black neighbourhood where there was a heavy influence of jazz culture.
His father loved music and insisted that each of his children learn to play at least one musical instrument. Young Oscar began playing the trumpet which he was forced to stop after a bout of tuberculosis. He shifted his attention to piano as a result.
Initially he was taught music by his father and elder sister. He was a very talented player who spent hours practicing and honing his musical skills.
His father arranged for him to train under the reputed pianist Paul de Marky who taught Peterson classical piano. He also learned traditional jazz and boogie-woogie.
At the age of 14, he won the national music competition organized by the Canadian Broadcasting Corporation in 1940. He dropped out of school to become a professional pianist. 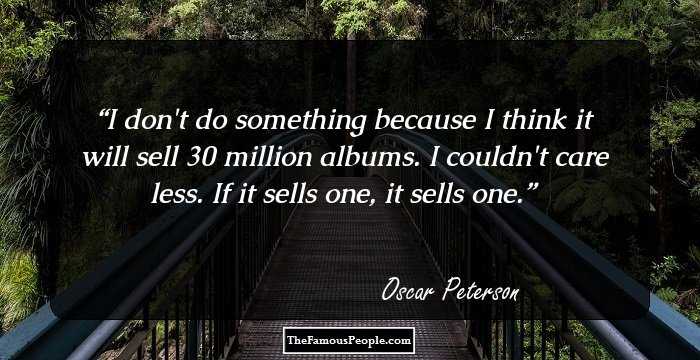 Quotes: Think, Will, I
Continue Reading Below
You May Like

The Best Black Actresses Of All Time
Career
He was allotted his own radio show ‘Fifteen Minutes Piano Rambling’ on the Montreal station CKAC. He was featured on CBM’s ‘Rhythm Time’ in 1941 and within years he was a national icon who had been heard on the shows ‘Light Up and Listen’ and ‘The Happy Gang’.
During this time Peterson was deeply influenced by the likes of Teddy Wilson, Nat “King” Cole and Art Tatum. Tatum became a role model for him and inspired his music throughout the 1940s and 1950s.
He joined the Johnny Holmes’s Orchestra in Montreal in 1944 and played with them till 1947.
He formed his own trio in 1948 which consisted of Austin “Ozzie” Roberts on the bass and Clarence Jones on the drums, along with Peterson himself on the piano. His group also included for a brief time Ben Johnson on the guitar. The trio used to perform at the Alberta Lounge and their broadcast could be heard on the Montreal radio station CFCF.
His chance meeting with the impresario Norman Granz was a turning point in his career. Granz heard a live broadcast of Peterson’s performance and was highly impressed by his music. Eventually Granz and Peterson would form a deep professional as well as personal connection.
He was introduced at Granz’s Jazz at the Philharmonic (JATP) presentation at Carnegie Hall, on 18 Sep 1949. The audience was left awestruck by his performance and Peterson decided to join JATP as a full-time member in 1950.
He created a trio with Ray Brown on the bass and Barney Kessel on the guitar. He toured all over the world both with JATP and his trio over the next several years.
He founded a jazz school called the ‘Advanced School of Contemporary Music’ in Toronto in the early 1960s. The school became very popular and students from all over the world flocked there to learn music from the maestro. However, he closed down the school after a few years owing to his busy touring schedule.
He had started composing from his early years though he began to devote more time to composition as he aged. The song ‘Hymn To Freedom’—a crusade song of the Civil Rights Movement led by Dr. Martin Luther King—was composed by Peterson.
Continue Reading Below
He composed songs for the National Film Board of Canada and had composed music for several motion pictures including the films ‘Big North’ and ‘The Silent Partner’.
During the 1970s, he often performed as a solo pianist and played at many European jazz festivals. His performances at several of the concerts he played at in 1975 and 1977 were recorded.
He formed a successful duo with Herbie Hancock in the 1980s. Throughout the 1990s he made performances and recordings with his prot�g� Benny Green. He continued playing and recording well into the 2000s in spite of his advancing age and health problems.
Major Works
Considered the ‘Maharaja of the keyboard’, Oscar Peterson was one of the greatest jazz pianists to have ever lived. He gave thousands of live concerts all over the world and released over 200 recordings in a career spanning over six decades.
Awards & Achievements
He was made an Officer of the Order of Canada for talent and service in 1972 and promoted to Companion of the order—the highest degree of merit and humanity—in 1984.
He was the recipient of the first Dr. Martin Luther King, Jr. Achievement Award from Black Theatre Workshop in 1986.
He won eight Grammy awards over the years including The Grammy Lifetime Achievement Award in 1997 for his creative contributions of outstanding artistic significance to the field of recording.
Personal Life & Legacy
He married several times. His first three marriages to Charlotte Huber, Sandra King and Lillian Fraser ended in divorce. His fourth wife was Kelly Peterson to whom he was married till his death. He had a total of seven children from his marriages.
His health began deteriorating during the later years of his life. He died of kidney failure in December 2007.
Trivia
An award winning documentary film, ‘In the Key of Oscar’ was made about the life of this legendary musician in 1992.

See the events in life of Oscar Peterson in Chronological Order