Advanced Search
A highly talented and multifaceted personality, Oscar Levant was a skilled musician who also had a successful career as a comedian and actor. It is an unfortunate fact that his versatility was the very cause that overshadowed his brilliance as a musician and made people view him as a jack of all trades. Music was his first love and he had been receiving music lessons from a young age and was trained in composition under the able tutelage of the Austrian composer Arnold Schoenberg. He forged a close friendship with the pianist and composer George Gershwin who enabled him to build a career for himself in Hollywood. Over the years he had composed music for several movies, and also wrote or co-wrote numerous hit songs. He became a regular panelist on the radio quiz show ‘Information Please’ where he impressed the audience with his quick wit and deep musical knowledge. Along with being a musician, he also developed a comic persona of a sarcastic and bitter man. He performed comedy sketches and began appearing in movies. His major pictures include ‘Rhapsody in Blue’ and ‘The Barkleys of Broadway’. The brilliant artist began suffering from neurotic problems during his later years and had to be frequently admitted to mental hospitals. American Celebrities
Actors
Pianists
Comedians
American Men
Childhood & Early Life
He was born into an orthodox Jewish family in Russia. His father’s name was Max.
He was given musical training from an early age. When he was seven, he studied under Martin Miessler who specialized in Czerny piano method. Even as a small child he could play Bach, Beethoven, and Chopin.
He attended Fifth Avenue High School where he had the fortune of meeting instructor Oscar Demmler who encouraged the young boy to perform with him and took him to the recitals of great musicians like Stokowski.
His mother took him to New York in 1922 after the death of his father. There he studied under the renowned piano teacher Zygmunt Stojowski. He began playing piano at nightclubs and restaurants. 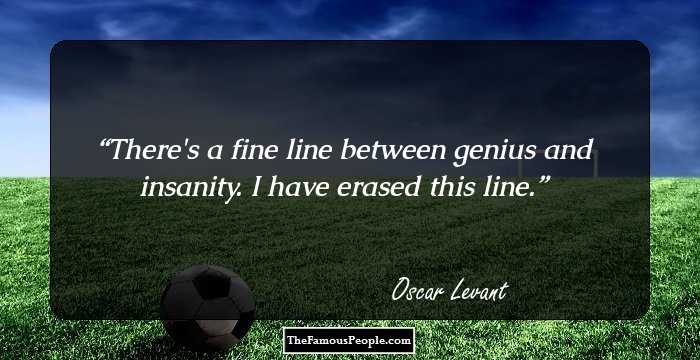 Quotes: I
Continue Reading Below
Career
He traveled to Los Angeles in 1929 and joined a group of composers and performers who were assigned to provide music to films. During this time he became friends with George Gershwin who helped him become an established pianist.
He composed music for more than 20 films from 1929 to 1948. He also wrote or co-wrote the lyrics for several songs which went on to become big hits.
He also entered the Broadway scenario during the 1920s and performed in the musical play ‘Burlesque’ in 1927, and co-composed the music for ‘Ripples’ in 1930. He wrote the lyrics for the musical revue ‘Sweet and Low’ in 1930.
He took to serious composition in the 1930s. He was working on his Sonatina for Piano, and the great American composer Aaron Copland happened to hear his piece. Copland invited Levant to perform at the Yaddo Festival of contemporary American music which he did in April 1932.
He made his debut as a Broadway conductor in 1938. He served in 65 performances of Kaufman and Hart’s ‘The Fabulous Invalid’ which was followed by another Kaufman and Hart production ‘The American Way’ in 1939.
He played the Concerto in F at the second Gershwin Memorial Concert at Lewishohn Stadium before an audience of 18,000 in 1939. The same year he also played the Concerto under Fritz Reiner in Pittsburgh.
During the late 1930s he became a regular panelist on the Radio quiz show ‘Information Please’. The show also featured other panelists such as Franklin P. Adams and John Kieran. The audience was much impressed by Levant’s in-depth music knowledge and witty remarks that enthralled them throughout the 1940s.
The decade of the 1940s saw him acting in several movies including ‘Rhapsody in Blue’ (1945), ‘You Were Meant for Me’ (1948), and ‘The Barkleys of Broadway’ (1949).
He made regular appearances on NBC radio’s ‘Kraft Music Hall’ which also featured Al Jolson from 1947 to 1949. He performed his popular songs and cracked jokes with Al and the guests.
Continue Reading Below
He starred in ‘An American in Paris’ in 1951 which was a musical film inspired by an orchestral composition by George Gershwin. The dance numbers in the film were choreographed by Gene Kelly who also made an appearance in the film.
He hosted a television talk show ‘The Oscar Levant Show’ from 1958 and 1960 which was later syndicated. He played the piano and also provided monologues. The show also had guests like Fred Astaire and Linus Pauling. 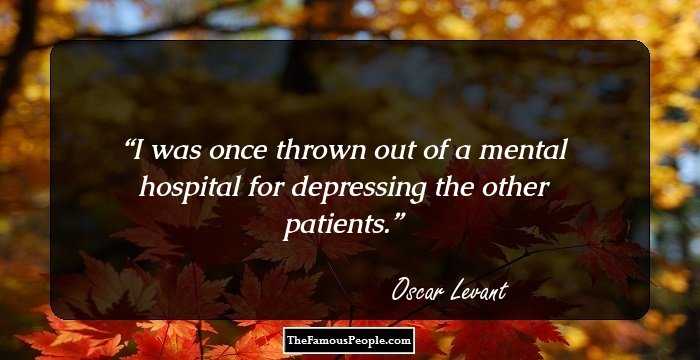 Quotes: I
Major Works
Oscar Levant was a brilliant composer and pianist who had provided music for over 20 Hollywood films, and had performed at several concerts. He was also a much admired radio host and a comedy actor known for his stoic and sarcastic on-screen persona.
Personal Life & legacy
He was once briefly married to the actress Barbara Woodell.
He married singer and actress June Gale in 1939. They had three children and were married for 33 years until his death.
He suffered from mental disorders like neuroses and hypochondria, and had to be frequently committed to mental hospitals. He died of a heart attack in 1972 at the age of 65. 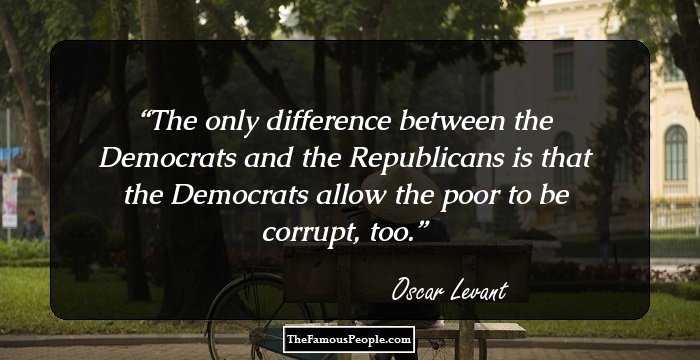 Quotes By Oscar Levant | Quote Of The Day | Top 100 Quotes

See the events in life of Oscar Levant in Chronological Order