Orenthal James Simpson is a former American football player, commentator and actor. Often referred as ‘the Juice’, his sensational and record breaking career in football led him to numerous other opportunities which became an inspiration for many others. Professionally he played as a running back for eleven seasons with the ‘Buffalo Bills’ in the ‘National Football League’ (NFL). He holds the record of being the first player to cover over 2000 yards in a season. His yards-per-game average of 143.1 in a single season is also a record. While he was at his peak as a football player, he simultaneously and successfully endeavoured in the film world as an actor. After his retirement from professional football he became a football broadcaster and continued with his acting career. His name was inducted in ‘College Football Hall of Fame’ and ‘Pro Football Hall of Fame’. He faced several legal hassles including murder charges of his ex-wife Nicole Brown Simpson and her friend Ronald Goldman. In 2007, he was arrested in Las Vegas with several charges including kidnapping and armed robbery. He is presently a convicted felon confined at the ‘Lovelock Correctional Center’ in Nevada serving a sentence of 33 years of imprisonment without parole for a minimum of 9 years. Aaren Simpson
DID WE MISS SOMEONE?
CLICK HERE AND TELL US
WE'LL MAKE SURE
THEY'RE HERE A.S.A.P
Quick Facts

American People
American Football Players
American Men
California Actors
University Of Southern California
Childhood & Early Life
O.J. Simpson was born on July 9, 1947, in Putrero Hill, California, in the family of Eunice and Jimmy Lee Simpson. His father was a chef and bank custodian and his mother was a hospital administrator.
Soon after his birth he developed rickets and had to wear braces on his legs till he was five. In 1952, his father left the family when he was still very young and his mother had to take responsibility of raising the four children.
He joined the ‘Persian Warriors’, a street gang in his early teens and was confined at the ‘San Francisco Youth Guidance Center’ for a short while.
He played football for his team the ‘Galileo Lions’ at the ‘Galileo High School’ (now known as ‘Galileo Academy of Science and Technology’) in San Francisco.
He attended the ‘City College of San Francisco’ from 1965 to 1966 and played in both offense and defence. He was inducted as a running back in the ‘Junior College All-American Team’.
He selected the ‘University of Southern California’ from the fifty colleges that wanted to recruit him. From 1967 to 1968, he attended the college after receiving an athletic scholarship and played as a running back. In 1967, he ran 1,543 yards with a score of 13 touchdowns. Again in 1968 he ran 1,880 yards that included 383 carries.
The 1967 football game between ‘USC’ and ‘UCLA’ is considered one of the greatest games of football in the 20th century. The game was tied in the fourth quarter after his sixty-four yard touchdown run and the extra point after touchdown provided the win. He did not win the ‘Heisman Trophy’ though he was a candidate for it. He won the ‘Walter Camp Award’.
In 1967, he lost a 100 m race in Stanford as a track athlete to Menzies Campbell, the then record holder from Britain. In June that year he set the ‘NCAA’ records by running in a ‘USC’ sprint relay quartet.
In 1968, he received the ‘Heisman Trophy’, the ‘Walter Camp Award’ and the ‘Maxwell Award’. The same year he signed a television contract with ‘ABC’ 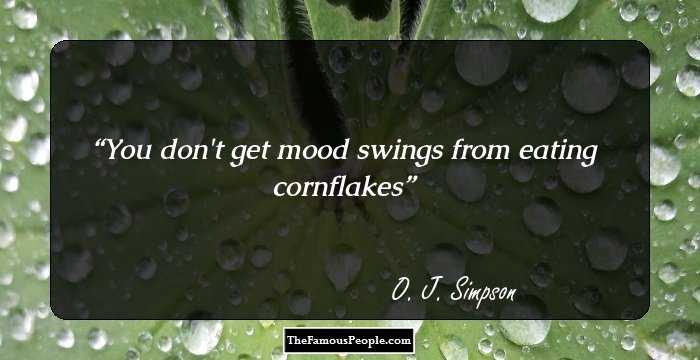 Quotes: You
Continue Reading Below
Career
His professional career in football started after he joined the ‘Buffalo Bills’ in 1969. The Sport magazine named him ‘Man of the Year’.
For five consecutive years from 1972 to 1976, O.J. Simpson topped 1,000 yards rushing. He led the rushing title of ‘NFL’ four times. He holds the record of being the first player ever to cover over 2000 yards in a season breaking a record of 1863 by Jim Brown. Though 6 players have crossed the mark, he remains the only one to cover it in fourteen-game season that the NFL later changed to sixteen-game season.
He made a successful endeavour in films while continuing with his professional football. Some of his films of the 1970s include ‘The Towering Inferno’ (1974), ‘The Klansman’ (1974) and ‘Capricorn One’ (1978).
His tenure in the 1977 season in ‘Buffalo Bills’ was cut short due to injury.
From 1978 to 1979, he played for the ‘San Francisco 49ers’ after being traded by the ‘Buffalo Bills’. He was the highest paid footballer of ‘NFL’ fetching a salary of $806,688 when he retired in 1979 due to a damaged knee.
In 1979, he launched his production company ‘Orenthal Productions’ which mostly created television based projects. His acting career continued with films like ‘Back to the Beach’ (1987) and trilogy of ‘The Naked Gun’ (1988, 1991 and 1994).
He served as a commentator of ‘The NFL on NBC’ and ‘Monday Night Football’. He appeared in the ‘Saturday Night Live’ as an audience member in its second season and hosted one episode in the third season.
He endorsed many brands and products like ‘Pioneer Chicken’, ‘Hertz’ rental car company, ‘pX Corporation’ and ‘HoneyBaked Ham’ including a $250,000 deal of three years with Chevrolet.
He was charged of murdering his ex-wife Nicole Brown Simpson and her friend Ronald Goldman on June 12, 1994. He was exonerated of the charges following a lengthy criminal trial, the ‘People v. Simpson’ in 1995. Later in 1997 a civil court held him liable and passed an order against him to pay compensatory and punitive damages amounting to $33.5 million.
Continue Reading Below
He tried to register ‘The Juice’, ‘O.J.’ and ‘O.J. Simpson’ as trademarks for a wide range of goods during the 90s. Later in 2000 he gave in after William B. Ritchie opposed his move.
He was arrested in Miami-Dade County, Florida, in February 2001 following a traffic dispute but was released of the charges in October 2001 after trial.
On December 4, 2001, the FBI searched his Miami house suspecting possession of drugs and money laundering. Though no illegal drugs were found, the investigators discovered equipments that can be used to steal satellite television programming and was sued in federal court for such action.
He was again arrested in Miami-Dade County on July 4, 2002 on charges of speeding infraction through a manatee protection zone. Though the charge was dropped, he had to pay fine for the offense.
He was tried in a Miami federal court after ‘DirecTV, Inc.’, a satellite television network accused Simpson in March 2004 for using illegal electronic equipments to pirate the network’s broadcast signals. The judgement came in the network’s favour and Simpson was ordered to pay $25,000 to the network and $33,678 as attorney’s fees and costs.
In September 2007, he was arrested in Las Vegas with several charges including kidnapping, criminal conspiracy, assault and armed robbery and after trial on December 5, 2008, he was sentenced for 33 years of imprisonment. The judgement includes a no parole condition for a minimum of 9 years. Presently he is imprisoned in the ‘Lovelock Correctional Center’. 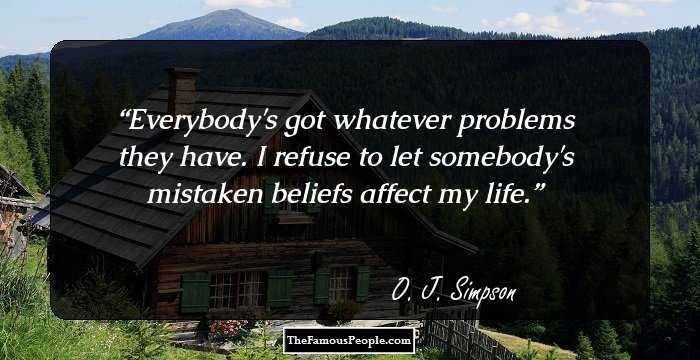 See the events in life of O. J. Simpson in Chronological Order