Norman Perceval Rockwell was an American artist—a painter and an illustrator. His work was an artistic depiction of the American culture and spirit of its people - he was inspired by the ideas of civil rights, poverty, national events, international events and space exploration. Most of his career was spent illustrating for the ‘Saturday Evening Post’, a collaboration that continued for around 47 years and resulted in 321 magnificent covers. Apart from the Post, Rockwell also worked for other publications like ‘Look’, ‘Peoples Popular Monthly’, ‘Life Magazine’, ‘The Literary Digest’, etc. He successfully created 4,000 illustrations and paintings in his career. Some of his iconic works include—1927 celebration of Charles Lindbergh's crossing of the Atlantic, Neil Armstrong's left foot on the surface of the moon after the successful moon landing, the ‘Four Freedom’ series during World War II, etc. Apart from illustrating for magazines and publications, Rockwell took classes at the Otis College of Art and Design, penned down his autobiography, ‘My Adventures as an Illustrator’, and did portraits of personalities like, President Kennedy, Nixon, Johnson, Jawaharlal Nehru, etc. Kate Capshaw
Artists #20
Illustrators #3
Artists & Painters #85
DID WE MISS SOMEONE?
CLICK HERE AND TELL US
WE'LL MAKE SURE
THEY'RE HERE A.S.A.P
Quick Facts

American Celebrities
American Men
American Artists
American Artists & Painters
Male Artists & Painters
Childhood & Early Life
Norman Rockwell was born in New York City to Jarvis Waring Rockwell and Anne Mary Rockwell. His father was a manager at a Philadelphia textile firm and mother was a homemaker.
From very early Rockwell knew that he wanted to be an artist. At 14 he decided to take classes at The New School of Art and later, dropped out of school and enrolled at the National Academy of Design.
He later took admission at the Art Students League of New York and right after graduation, he started working as an illustrator for the ‘Boy’s Life’ magazine. 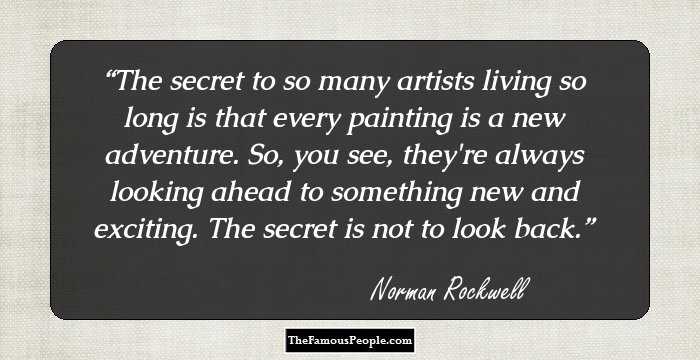 Quotes: You, Living
Continue Reading Below
You May Like

Who Is The Most Popular BTS Member?
Career
In 1916, the young 22 year old Rockwell painted his first cover for the ‘Saturday Evening Post’. This was the beginning of a collaboration that worked out successfully for the next 47 years of his life.
Rockwell followed that success with ‘Circus Barker and Strongman’, ‘Gramps at the Plate’, ‘Redhead Loves Hatty Perkins’, ‘People in a Theatre Balcony’ and ‘Man Playing Santa.
His successful work published in the Post fetched him more work from renowned publications like, ‘The Literary Digest’, ‘The Country Gentleman’, ‘Leslie's Weekly’, ‘Judge’, ‘Peoples Popular Monthly’, ‘Life Magazine, etc.
During World War I, Rockwell wanted to get enlisted in the army but he was refused because he was underweight. He spent the next night hogging on fatty food, which got him enrolment as a military artist.
During WWII, Rockwell created the ‘Four Freedom’ series, which was inspired by Franklin D. Roosevelt. In the series he explained the four principles for universal rights: ‘Freedom from Want’, ‘Freedom of Speech’, ‘Freedom of Worship’ and ‘Freedom from Fear’.
Around the 1940s, he was approached by writer Elliot Caplin, brother of cartoonist Al Capp, with an idea that the three of them should work together on a comic strip and Rockwell can do the illustrations.
King Features Syndicate had promised a $1000 per week deal to Rockwell but the project was called off as Rockwell was a known perfectionist and could not deliver the work at the pace that the project demanded.
During those years, he spent winter months as artist-in-residence at Otis College of Art and Design and his students occasionally modeled for his Post covers. In 1949, he donated an original Post illustration to raise fund for college library.
In 1960, after the sudden death of his wife, Rockwell took time off from work and wrote down his autobiography, ‘My Adventures as an Illustrator’, with the help of his son. The Post published citations from his book.
Continue Reading Below
He ended his association with the ‘Saturday Evening Post’ in 1963 and spent the rest of his career illustrating for the ‘Look’ magazine. His work at ‘Look’ was inspired by his ideas about civil rights, poverty and space exploration.
In 1968, Rockwell did the album cover portrait of Mike Bloomfield and Al Kooper for their record ‘The Live Adventure of Mike Bloomfield and Al Kooper’. He also did portraits of personalities like, President Kennedy, Johnson, Jawaharlal Nehru, etc. 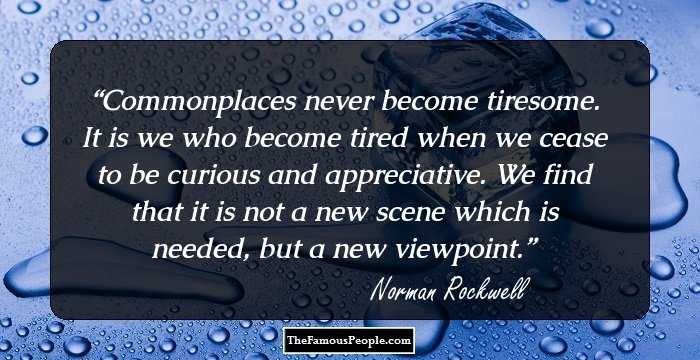 Quotes: Never
Major Works
The most prominent work of Rockwell’s life is considered to be his forty seven year old association with the ‘Saturday Evening Post’, for which he made 321 illustrations and his most famous artistic works were published in it.
Awards & Achievements
Rockwell received the Presidential Medal of Freedom, the United States of America's highest civilian honor, in 1977. 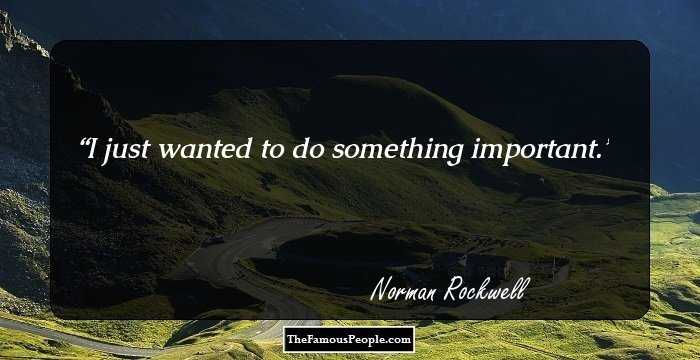 Quotes: I
Personal Life & Legacy
Rockwell was married to his first wife, Irene O’Connor from 1916-1930. She was his model in the illustration, ‘Mother Tucking Children into Bed (1921)’. Their marriage ended in divorce.
In 1930, he married Mary Barstow, a schoolteacher, and the couple had three sons together: Jarvis, Thomas and Peter. Mary died of a sudden heart attack in 1959, which left him very depressed for years.
He married for the third time to Mary Leete ‘Molly’ Punderson in 1961 and remained married to her until his death.
Rockwell died of emphysema at the age of 84 in 1978, in Stockbridge, Massachusetts.
Trivia
His funeral was attended by the First Lady Rosalynn Carter.
He and his family moved to Stockbridge, Massachusetts, so that his second wife could be treated at the Austen Riggs Centre, a psychiatric hospital.
Rockwell took psychiatric treatment for many years, from the analyst Erik Erikson.
He produced over 4,000 original works in his lifetime.
A few years before dying, Rockwell founded a trust to make sure that his artistic legacy could prosper long after he was gone; this was the basis of foundation of the Norman Rockwell Museum in Stockbridge.
You May Like

See the events in life of Norman Rockwell in Chronological Order