Nikola Tesla was a Serbian-American inventor, best known for his development of alternating current electrical systems. He also made extraordinary contributions to the fields of electromagnetism and wireless radio communications. He was a child prodigy and possessed eidetic memory. He also had a futuristic vision for mankind which is evident from most of his discoveries and researches. He was a trained electrical and mechanical engineer whose discoveries and inventions included the modern electric motor, wireless transmission of energy, basic laser, radar technology, the first neon and fluorescent illumination, and the Tesla coil (widely used in radio, television sets, and other electronic equipment). Though he was a great inventor, his life was mostly marred by poverty as he was a terrible businessman. He was impractical with his money and never got involved in a relationship with anyone. Although he was regarded as a generous and polite person by his friends, he had very limited social interaction with them because of his firm daily routine. He was a loner all his life and died penniless without the accolades that he would ultimately earn after his death. He was undoubtedly one of the most influential inventors of the 20th century whose discoveries in the field of electricity were way ahead of his time. His discoveries continue to influence technology even today. American Celebrities
Serbian Celebrities
Physicists
Electrical Engineers
Mechanical Engineers
American Men
Childhood & Early Life
He was born on July 10, 1856, in the village of Smiljan, Austrian Empire, to Milutin Tesla, an orthodox priest, and his wife Đuka Mandic, an inventive homemaker who, in her spare time, created household appliances.
He was the fourth of five children in his family. He had eidetic memory and possessed a knack for electrical inventions. He always credited his mother’s genetic influence for his creative abilities.
He received his early education of German, arithmetic, and religion from a primary school in Smiljan.
In 1870, he was enrolled at ‘Higher Real Gymnasium’ in Karlovac and graduated the four-year course within three years in 1873, thanks to his extraordinary intelligence.
In 1875, he attended ‘Austrian Polytechnic’ in Graz, Austria, on a ‘Military Frontier’ scholarship. He was a brilliant student in his first year but got addicted to gambling in his second year which ruined his studies and he was not able to obtain a degree. 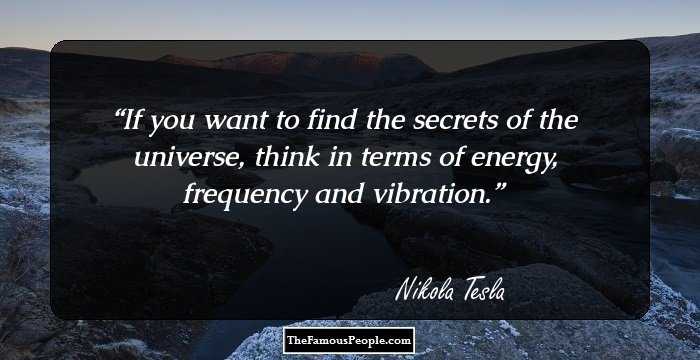 The Hottest Male Celebrities With The Best Abs
Career
In 1881, he worked as a draftsman in the ‘Central Telegraph Office’ in Budapest. Later, he became the chief electrician at the ‘Budapest Telephone Exchange’ and made significant improvements to the Central Station equipment.
In 1882, he was employed by the ‘Continental Edison Company’ in France as a designer of electrical equipment. After two years, he was shifted to New York to work for Thomas Edison and help him redesign the direct current generators.
His idea of improving Edison’s inefficient motors and generators through the polyphase alternating current system prompted Edison to promise him a prize money of fifty thousand dollars if he did it successfully. He completed his task and demanded the prize money to which Edison replied that his challenge was just a form of American humor. Tesla immediately resigned from his job.
Fascinated by the works of Tesla, Western Union superintendent Alfred S. Brown and attorney Charles F. Peck backed him up financially and formed the ‘Tesla Electric Company’ in 1887. This helped Tesla in developing an induction motor that ran on alternating current. He then eventually got his works patented.
In 1888, he was hired by industrialist George Westinghouse, who was impressed by his idea of developing the alternating current electric supply system. Ultimately, he won the war of currents over Edison’s DC system by demonstrating the marvels of electric appliances via alternating current.
After visiting an exposition in Paris in 1889, Tesla came to know about the existence of electromagnetic radiation which was proved by Heinrich Hertz. Soon, he established his own laboratory and invested his time and energy on numerous experiments, including the ‘Tesla Coil’ and carbon button lamp. He also experimented on the power of electrical resonance and various types of lighting.
He was also the vice-president of ‘American Institute of Electrical Engineers’ from 1892 to 1894. The institute later became part of the ‘Institute of Radio Engineers.’
In 1893, Tesla demonstrated the fully developed polyphase AC system in an exposition held at Columbia. The demonstration was conducted through ‘Westinghouse Electric’ which had his patents.
In 1899, he moved to Colorado Springs where he established his laboratory for creating a wireless global energy transmission system. He experimented with man-made lightning in an attempt to provide free wireless electricity throughout the world.
Continue Reading Below
In 1900, he began his work on establishing the trans-Atlantic wireless telecommunications facility in Wardenclyffe, near Shoreham, Long Island. He performed many experiments in the facility but due to shortage of funds, he was forced to sell it around the time of World War I.
Later, he disclosed a method of transmitting mechanical energy with minimal loss over any terrestrial distance and a method of accurately determining the location of underground mineral deposits. 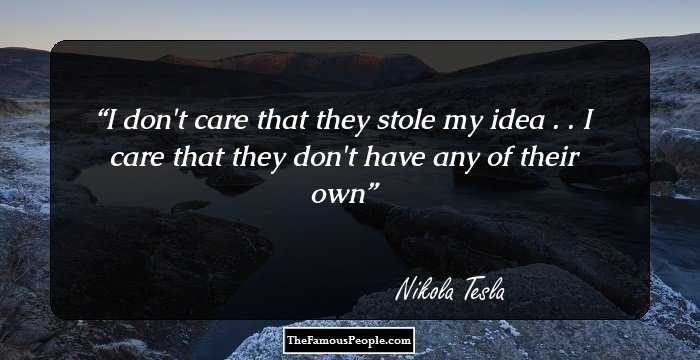 Quotes: I
Major Works
His most notable contribution is the modern alternating current (AC) electricity supply system. It proved to be more efficient and effective than the direct current (DC) system of Edison.
One of his most celebrated inventions is the ‘Tesla Coil,’ a circuit that transforms energy into extremely high voltage charges, creating powerful electrical fields capable of producing spectacular electrical arcs.
In 1943, he was dubbed the ‘father of the radio’ for his significant contributions to the development of radio.
He played a pioneering role in the development of radar technology, X-ray technology, and rotating magnetic field—the basis of most AC machinery.
Awards & Achievements
Tesla (unit), the SI derived unit of magnetic flux density (or magnetic inductivity), is named in his honor.
In 1894, he was awarded the ‘Elliott Cresson Medal.’
Continue Reading Below
In 1895, he was honored with the ‘Order of Prince Danilo I.’
In 1934, he was awarded the ‘John Scott Medal.’
In 1936, he was honored by the government of Yugoslavia with the ‘Order of the White Eagle, I Class.’
He was awarded the ‘University of Paris Medal’ in 1937.
He was featured on the cover of ‘TIME’ magazine on the occasion of his 75th birthday. 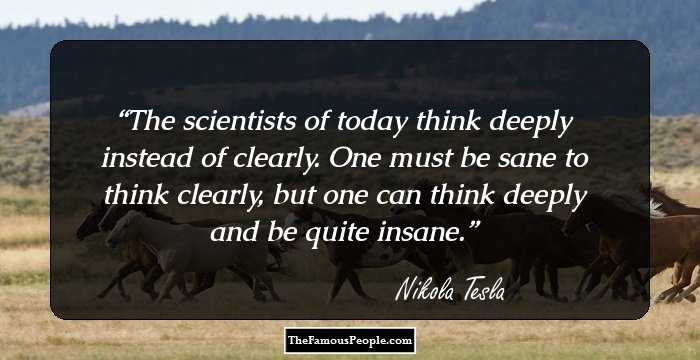 Quotes: Think
Personal Life & Legacy
He had a strict schedule for his everyday life. He worked for almost 15 hours a day with not more than two hours of sleep. He walked for eight to ten miles each day and did not have much of a social life.
He had photographic memory and an ability to speak in eight languages. He never married and did not have any known relationships despite the fact that many women were madly in love with him.
He became a naturalized citizen of the United States in July 1891.
He became a vegetarian in his later years, living only on milk, bread, honey, and vegetable juices. He used to feed pigeons on an everyday basis towards the end of his life.
He died of unknown causes on January 7, 1943, in a hotel room in New York City. It was later confirmed that he died of coronary thrombosis.
‘The Nikola Tesla Award’ is awarded annually for outstanding contribution to the generation or utilization of electric power.
Recommended Lists:
Inventors #2
Scientists #95
Engineers #8
Inventors & Discoverers #24
You May Like

Quotes By Nikola Tesla | Quote Of The Day | Top 100 Quotes

See the events in life of Nikola Tesla in Chronological Order