Advanced Search
Nikki Sixx is the founder and the lead bassist of the band ‘Mötley Crüe’. Known for his crazy on-stage antics, Sixx has made it to the list of the ‘100 Most Influential’ Musicians of today. His career kick-started at the age of 17 and since then, he has gone on to become one of the most admired bassists in the genre of heavy metal around the world. He initially started off by performing in various bands in Los Angeles. Apart from his music career, his autobiography, ‘The Heroin Diaries: A Year in the Life of a Shattered Rock Star’ and ‘The Dirt’, became New York Times best-sellers. He currently hosts the morning radio show, ‘Sixx Sense with Nikki Sixx’ and ‘The Side Show Countdown’. He also has his own clothing line titled, ‘Royal Underground’. Initially, this line focused on men’s clothing and has now slowly expanded to women’s wear. Before he got into the world of music, he was making ends meet by working numerous dead-end jobs. However, he always dreamt of becoming a songwriter and also dreamt of putting together the ultimate ‘theatrical’ band, thus forming the ‘Mötley Crüe’. American People
Lyricists & Songwriters
Hard Rock Musicians
Heavy Metal Musicians
American Men
Childhood & Early Life
Nikki Sixx was born as Frank Carlton Serafino Feranna on December 11, 1958 to a single mother, Deana Richards in San Jose, California. For a brief part of his childhood, he was raised by his mother, after which, he moved in with his grandparents, as his mother deserted the family.
Throughout his childhood, he moved from one place to another several times and while he was in Jerome, Idaho, he became a delinquent, breaking into neighbors’ homes, shoplifting and selling drugs. It was during this time he learnt how to play the bass guitar and changed his name to Nikki Sixx.
When he was 17-years-old, he moved to Los Angeles, where he worked a number of odd jobs including selling vacuums and working at a liquor store. He was drawn towards the idea of being part of a band and eventually joined the group, ‘Sister’. 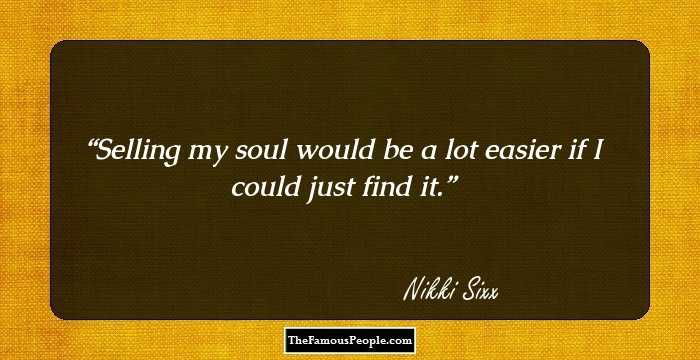 Quotes: Soul, I
Continue Reading Below
Career
After recording a demo with the group, he was fired from the band along with another band-mate, Lizzie Grey. Together, they formed the group, ‘London’ in 1978. He soon departed from the band.
He left the group and founded the band ‘Mötley Crüe’ in 1980 including Tommy Lee, Mick Mars and Vince Neil. They recorded their first album, ‘Too Fast for Love’ the subsequent year, which was released under the band’s own record group, Leathür Records.
On September 26, 1983, the band released their second studio album, ‘Shout at the Devil’, which vaulted the band to widespread national fame.
From 1985 to 1989, they released a string of albums including ‘Theatre of Pain’, ‘Girls, Girls, Girls’ and the hit album, ‘Dr. Feelgood’.
The band was doing exceptionally well around this time, but Sixx had become addicted to heroin and visited rehabilitation centers a number of times by now.
On October 1, 1991, the band released a compilation album of all their hit songs titled, ‘Decade of Decadence’. Three years later, they released a self-titled album with the newest band member, John Corabi, before they fired him in 1996.
In 1997, they released the album, ‘Generation Swine’, which was the seventh heavy metal album by the band. After two years, Tommy Lee left the band and formed the temporary group, ‘Methods of Mayhem’. His position was taken over by Randy Castillo.
In 2000, the group remixed all of their songs and compiled it in an album titled, ‘New Tattoo’. The next year, Sixx penned the best-seller autobiography, ‘The Dirt’, which labeled the band as ‘the world’s most notorious rock band’.
In 2000, he formed project ‘58’, which is an internet-based alternative project. He founded this along with Dave Darling, Steve Gibb and Bucket Baker. The group released their debut album ‘Diet for a New America’ and also released a single titled, ‘Piece of Candy’.
Continue Reading Below
During the Mötley Crüe’s hiatus, Sixx formed ‘Brides of Destruction’ along with Tracii Guns from 2002 to 2004. They released the album, ‘Here Come the Brides’, which became a huge hit. In October 2004, the group decided that they would go on a hiatus while Sixx returned to the ‘Mötley Crüe’.
The ‘Mötley’ Crüe finally reunited in 2004. Two years later, the band went on a reunion tour with all the original members of the band.
In 2006, he formed the group ‘Sixx: A.M.’, which was formed initially to record an audio supplement to his autobiography, ‘The Heroin Diaries: A Year in the Life of a Shattered Rock Star’ that was published the next year.
In 2008, they announced the first-of-its-kind ‘Crüe Fest’, which featured Sixx’s side project ‘Sixx: A.M., Buckcherry, Papa Roach and Trapt’. The same year, they released their ninth studio album, ‘Saints of Los Angeles’.
He launched his own radio show called ‘Sixx Sense with Nikki Sixx’, which aired on all major rock/alternative music stations from February 8, 2010. Two years later, the show was moved to the morning slot. Apart from this radio show, he also hosts a side show called ‘The Side Show with Nikki Six’, which is a weekend program. 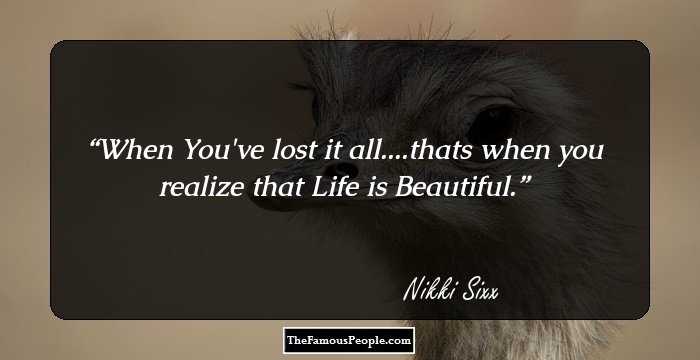 Quotes: You, Life, Beautiful
Major Works
‘Too Fast for Love’, is the debut-record of the heavy metal band ‘Mötley Crüe’. The album released in 1981 under Leathür Records, but was re-released under Elektra Records the following year. It earned platinum status by the RIAA and touched the no. 77 position on the Billboard 200.
In 1989, the ‘Mötley Crüe’ released their fifth studio album, ‘Dr. Feelgood’, which topped the Billboard 200 chart and became one of their best-selling albums to date. It sold more than 6 million copies in the United States and achieved ‘Gold’ status in the United Kingdom. The singles, ‘Dr. Feelgood’ and ‘Kickstart My Heart’ were both nominated for the Grammy Awards.
The debut album of Sixx’s band, ‘Brides of Destruction’ titled, ‘Here Come the Brides’ is considered their most successful album and is the only album from this band to be on the Billboard 200.
Personal Life & Legacy
In the 1980s, he dated and lived with Lita Ford. Six years later, he dated Vanity and documented his turbulent relationship with the model in his autobiography.
From 1989 to 1996, he was married to Brandi Brandt, a Playboy Playmate. They have three children together; Gunner Nicholas Six, Storm Brieann Sixx and Decker Nilsson Sixx.
After his split with Brandt, he married Donna D’Erico, another Playboy Playmate. They have a daughter together; Frankie-Jean Sixx. They separated, reconciled and separated again, finally divorcing in 2007.
He was in a relationship with famous tattoo artist, Kat Von D from 2008 to 2010. After his split with Von D, he began dating Courtney Brigham and is currently living with her.
All his life he has been suffering from substance abuse and has even passed out on a number of occasions. He was also sent to rehab on a number of occasions. 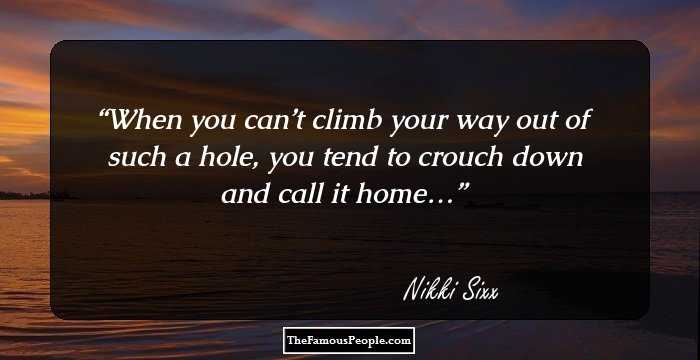 Quotes: You
Trivia
This famous musician and bassist from the ‘Mötley Crüe’ fame, was declared dead for two minutes after heroin overdose in 1987. When the paramedics arrived on the scene, one of them was apparently a ‘Mötley Crüe’ fan and he said, ‘No one’s going to die in my ambulance’.
Recommended Lists:
Musicians #342
Lyricists & Songwriters #209

See the events in life of Nikki Sixx in Chronological Order