Advanced Search
Nick Offerman is an American actor, comedian, and writer who is popularly known for playing the role of ‘Ron Swanson’ in the American political satire television series ‘Parks and Recreation’. Offerman was awarded the TCA Award for Individual Achievement in Comedy for his work in the television satire. He also appeared in ‘American Body Shop’ and ‘Childrens Hospital’ in the late 2000s and is known for portraying the role of ‘Karl Weathers’ in the black-comedy crime drama television series ‘Fargo’. In over twenty years of his professional career, Offerman has appeared in almost fifty films. He is a prominent voice artist as well. Though he hasn’t played any lead role in films, he has played some important roles like ‘Karl Steele’ in ‘Miss Congeniality 2: Armed and Fabulous’ and ‘Shlubb’ in ‘Sin City’. He has also appeared in films like ‘The Men Who Stare at Goats’, ‘21 Jump Street’, ‘22 Jump Street’, and ‘Me and Earl and the Dying Girl’. He is popular for his witty sense of humor; this feature of his personality is often reflected in his acting. As a voice actor, he has voiced numerous characters in films like ‘The Lego Movie’, ‘Hotel Transylvania 2’, and ‘Ice Age: Collision Course’. American People
American Men
Illinois Actors
Cancer Actors
Male Comedians
Career
Nick Offerman began his professional journey in the theatre industry. He also worked for various theatres like Goodman, Steppenwolf and Wisdom Bridge in Chicago as a master carpenter and a fight choreographer besides acting. After making a few small appearances in films and television shows like ‘ER’, ‘Profiler’, ‘Going All the Way’, and ‘Treasure Island’, Offerman was featured in ‘Will & Grace’ where he met his future wife Megan Mullally. He later played some small roles in ‘24’, ‘NYPD Blue’, ‘George Lopez’, and ‘Gilmore Girls’ through the mid-2000s. During that time, he also appeared in films like ‘Cursed,’ ‘Wristcutters: A Love Story’, and ‘3 lbs’.
He appeared alongside Benicio Del Toro, Mickey Rourke, Bruce Willis, Clive Owen and Jessica Alba in the 2005 American neo-noir crime anthology film ‘Sin City’. He portrayed the character of ‘Karl Steele’ in the comedy film ‘Miss Congeniality 2: Armed and Fabulous’.
Offerman appeared as ‘Rob’ in the American comedy series ‘American Body Shop’ in 2007. A year later, he was signed to play the role of ‘Chance Briggs’ in the series ‘Childrens Hospital’ which played till 2015. He was offered the role of ‘Ron Swanson’ by Michael Schur and Greg Daniels, the creators of the American political satire television sitcom ‘Parks and Recreation’. Offerman’s performance was much appreciated by the audience and he became a big reason for the show’s success. His presence and physical humor were unique. He won the TCA Award for Individual Achievement in Comedy in 2011 and had been nominated for the same award the previous year. He also earned a nomination at the Critics' Choice Television Award for Best Supporting Actor in a Comedy Series in 2011. From 2013 to 2015, he worked as an executive producer for the American adult animated series ‘Axe Cop’ in which he also voiced the lead character.
Offerman is also known for his voice roles in the film industry. He has worked in ‘The Lego Movie’ as the voice of ‘MetalBeard’. He voiced ‘George’ in ‘Ernest & Celestine’, ‘Mike’ in ‘Hotel Transylvania 2’, ‘Gavin’ in ‘Ice Age: Collision Course’, and ‘Raymond’ in My Life as a Courgette’. He is now due to appear in the second part of the ‘Lego Movie’ in 2019.
Recommended Lists:

American Actors
American Comedians
Actors Who Are In Their 50s
American Film & Theater Personalities
Continue Reading Below
Personal Life
Nicholas Offerman was born in Joliet, Illinois, on June 26, 1970, to Cathy Roberts, a nurse by profession, and Ric Offerman, a junior high school teacher. He enrolled at the University of Illinois at Urbana–Champaign and received his Bachelor of Fine Arts degree in 1993.
He met Megan Mullally, a comedian, and actress by profession, at the set of ‘The Berlin Circle’ and later they married on September 20, 2003. Offerman is known for his hobby of making boats. He also has released three semi-autobiographies, ‘Paddle Your Own Canoe: One Man's Fundamentals for Delicious Living’, ‘Gumption: Relighting the Torch of Freedom with America's Gutsiest Troublemakers’, and ‘Good Clean Fun: Misadventures in Sawdust at Offerman Woodshop’.
Recommended Lists: 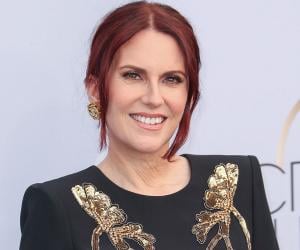