(American Actor Best Known for His Films: ‘The Prince of Tides’, ‘Affliction’ and ‘Warrior')

Advanced Search
Nicholas King “Nick” Nolte is an award-winning American actor and former model, who made it big in the 1980s with films like ‘48 Hours’, ‘Down and Out in Beverly Hills’, and ‘The Prince of Tides’. He won the Golden Globe Award for Best Actor in Motion Picture Drama, and was nominated for the Academy Award for Best Actor for ‘The Prince of Tides’. He also earned Academy Award nominations for ‘Affliction’ and ‘Warrior’. He was nominated for a Golden Globe Award for Best Actor in Television Series Musical or Comedy for his role in the TV series ‘Graves’.He has appeared in more than 67 films and 19 TV series, and has played a variety of characters. He is well-known for his gravelly voice and trademark athleticism. A recovering alcoholic and former drug abuser, Nick Nolte did a series of forgettable films until he went to a rehab and revitalized his career with two smaller projects, ‘Afterglow’ and ‘Affliction’, for which he received his second Best Actor Oscar nomination. His strong performances include his roles in ‘The Golden Bowl’, ‘The Good Thief’, ‘Hotel Rwanda’, and ‘Off the Black’. Since 2008 he worked mostly in the comedy arena with projects like ‘Tropic Thunder’, ‘A Walk in the Woods, and ‘The Ridiculous 6’. In 2016, he took a break from films to concentrate on his TV career. American People
American Men
Nebraska Actors
Tall Celebrities
Tall Male Celebrities
Childhood & Early Life
Nicholas King Nolte was born on February 8, 1941, in Omaha, Nebraska, to Franklin Arthur Nolte and Helen. His father was a farmer's son, who ran away from home, and was a three-time letter winner in football at Iowa State University. His mother was a department store buyer. His ancestry includes German, Scots-Irish, English, Scottish and Swiss-German roots.
His maternal grandfather, Matthew Leander King, had invented the hollow-tile silo and was well known during the years of early aviation. He has an elder sister, Nancy, who was an executive for the Red Cross.
He went to Kingsley Elementary School in Waterloo, Iowa. He attended Westside High School in Omaha, where he played football, and was the kicker on the football team. He also studied in Benson High School, but was expelled for hiding beer and drinking it during a practice session.
After he graduated from high school in 1959, he attended Pasadena City College in Southern California and Arizona State University in Tempe on a football scholarship. He also attended Eastern Arizona College in Thatcher and Phoenix College in Phoenix. At Eastern Arizona College, he lettered in football. He also played basketball and baseball.
When his studies ended abruptly due to poor grades, he turned to theaters. After stints at the Stella Adler Academy in Los Angeles, and the Pasadena Playhouse, he traveled the country for several years, and worked in regional theaters. He worked at the Old Log Theater in Minnesota for three years. 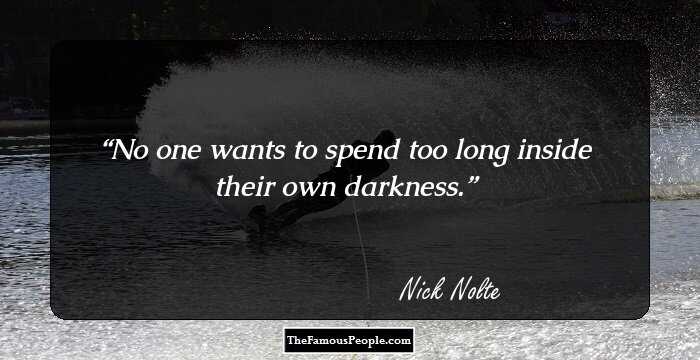 Continue Reading Below
Career
Nick Nolte worked as a model from the late 1960s to the early 1970s. In 1973, he appeared in the Griff episode, ‘Who Framed Billy the Kid?’, as Billy Randolph, a football player accused of murder. In 1976, he starred in the television miniseries ‘Rich Man, Poor Man’, based on Irwin Shaw's best-selling novel.
He appeared with Andy Griffith in ‘Winter Kill’, a television film made as a pilot of a television series. He also appeared on ‘Adams of Eagle Lake’, but these did not boost his acting career.
In 1977, he starred in ‘The Deep’, an adventure film based on Peter Benchley's novel of the same name. In 1978, he appeared in the psychological drama film ‘Who'll Stop the Rain’.
In 1979, he was featured in ‘North Dallas Forty’, which was based on Peter Gent's novel. In 1982, he starred in ‘48 Hrs’ with Eddie Murphy. It was an American action comedy film directed by Walter Hill.
During the 1980s, he starred in ‘Under Fire’ (1983), ‘Grace Quigley’ (1985), ‘Down and Out in Beverly Hills’ (1986), ‘Extreme Prejudice’ (1987) and ‘New York Stories’ (1989). He also starred in the sequel ‘Another 48 Hrs’.
In 1991, he did ‘The Prince of Tides’ and was nominated for the Academy Award for Best Actor. He also starred in Martin Scorsese's remake of ‘Cape Fear’ with Robert De Niro and Jessica Lange.
In 1992, he featured in ‘Lorenzo's Oil’, an American drama directed by George Miller. He then starred in ‘Jefferson in Paris’ in 1995, ‘Mulholland Falls’ in 1996, and ‘Afterglow’ in 1997.
He starred with Sean Penn in three films—Terrence Malick's war epic ‘The Thin Red Line’, ‘U Turn’ and ‘Gangster Squad’.
He appeared in ‘Clean’, the 2004 drama film directed by French director Olivier Assayas. He also appeared in ‘Hotel Rwanda’, a British-Italian-South African historical drama film directed by Terry George.
Continue Reading Below
Nick Nolte acted in a supporting role in the 2006 drama ‘Peaceful Warrior’, directed by Victor Salva and written by Kevin Bernhardt. He also did a supporting role in the comedy movie ‘Tropic Thunder’ in 2008.
In 2011, he portrayed Paddy Conlon, who was recovering from alcohol abuse, in ‘Warrior’. The same year, he starred with Dustin Hoffman in the HBO series ‘Luck’. However, HBO ended the series after three horses died during filming.
In 2015, he was featured in the biopic comedy-drama ‘A Walk in the Woods’ and in the revenge thriller ‘Return to Sender’, a psychological thriller film directed by Fouad Mikati.
In 2016, he starred in ‘Graves’ on Epix TV. It is an American comedy television series created by Joshua Michael Stern. The show is about a former President of the US who admits to mistakes he made while in office. 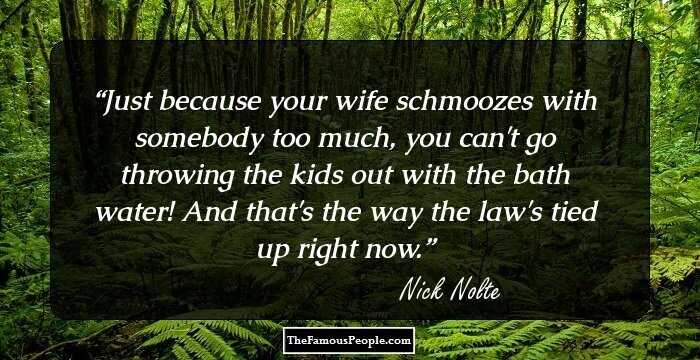 Major Works
Nick Nolte’s performances in the films ‘Clean’, and ‘Hotel Rwanda’ received positive reviews. His soulful portrayal as rebel Tom Jordache in the TV miniseries ‘Rich Man, Poor Man’ won him critical acclaim and brought him into the spotlight. His roles as football player Phillip Elliott in ‘North Dallas Forty’, and policeman Jack Cates in ‘48 Hrs’ won him critical acclaim.
Awards & Achievements
For ‘The Prince of Tides’, Nick Nolte was nominated for the Academy Award for Best Actor in 1992. He won the Golden Globe Award for Best Actor in Motion Picture Drama for the same role. He also earned Academy Award nominations for ‘Affliction’, and ‘Warrior’.
He was nominated for a Golden Globe Award for Best Actor in Television Series Musical or Comedy for his role in the TV series ‘Graves’. 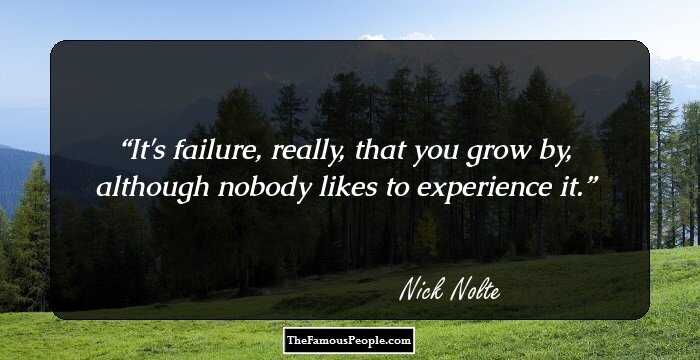 Personal Life
Nick Nolte has been married four times. He married Sheila Page in 1966 and was divorced in 1970. He married Sharyn Haddad in 1978 and divorced her in 1983. Eventually he married Rebecca Linger in 1984 and got a divorce in 1994. He and Linger have a son, Brawley King Nolte, who was born in 1986. He also has a daughter Sophie, who was born in 2007.
He has also been in relationships with Debra Winger, an American actress, and Vicki Lewis, an American singer and actress.
In 2016, he got married for the fourth time, tying the knot with Clytie Lane.
In 1965, he was arrested for selling counterfeit documents, and was given a 45-year prison sentence and a hefty fine. Luckily for him, the sentence was suspended. However, this suspended his eligibility to join the military.
He had a long struggle with drug and alcohol abuse. In 2002, he was arrested for drunken driving in Malibu, California. The subsequent reactions in the media inspired him to go to a rehab to recover, and boost his failing career. He was given three years' probation, and was ordered to undergo alcohol and drug counseling.

See the events in life of Nick Nolte in Chronological Order