Nathaniel Hawthorne was a famous nineteenth century American novelist. He belonged to a family of magistrates, judges, sailors and clergymen. Two of his ancestors were William Hathorne, a magistrate who condemned a Quaker woman to public whipping and John Hathorne, a judge at the notorious Salem Witch Trials. Nathaniel added an extra ‘W’ in his surname to conceal this line of heritage. He used New England as the setting of his novels and most of his works are moral allegories inspired by Puritan ideologies. The works are psychologically complex and often contain moral lessons. Hawthorne’s oeuvre is considered to be a representative of Dark Romanticism, a significant aspect of the Romantic Movement. Apart from novels and short stories, he also wrote a biography of his classmate and friend, Franklin Pierce. Hawthorne was part of ‘Brook Farm’, a transcendentalist community where he came in contact with a number of philosophers and thinkers like Ralph Waldo Emerson, Henry Thoreau, and Bronson Alcott. However, he became disenchanted with Transcendentalism and documented his feelings about it in the fictional work ‘The Blithedale Romance’. For four years, he served as a consular in Liverpool, Lancashire. During his last years, his writings became incoherent and showed symptoms of psychic decay. Nathaniel Hawthorne died in his sleep, while on a trip with his friend Pierce. American People
Short Story Writers
American Men
Bowdoin College
Male Writers
Childhood & Early Life
Nathaniel Hawthorne was born on July 4, 1804, in Salem, Massachusetts to Nathaniel Hathorne, Sr. and Elizabeth Clark Hathorne.
His father was a sea captain and a member of the East India Marine Society. He died in 1808 of yellow fever in Suriname, leaving a widow and three young children. Nathaniel was only four when his father died.
His family moved in with his maternal relatives, the Mannings, in Salem.
On November 10, 1813, young Hawthorne was hit on the leg while playing. He was bedridden for a year. It was during this time that he became an avid reader and wanted to take up writing as a profession.
In 1821, he joined the Bowdoin College. During this period, he became friends with Franklin Pierce, H.W. Longfellow, and Horatio Bridge. He graduated in the year 1825. 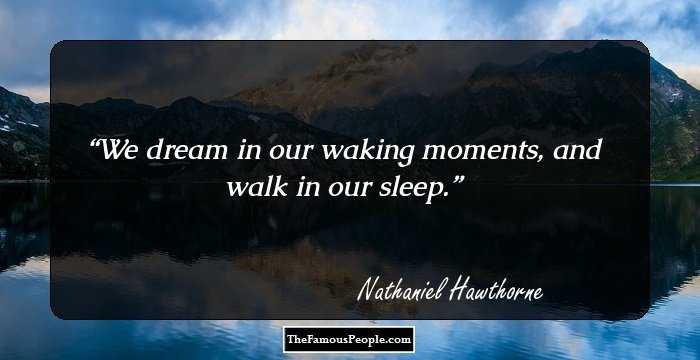 Continue Reading Below
Career
He wrote his first novel ‘Fanshawe’ in 1828 but later attempted to suppress it as he felt this work did not match the standard of his later works.
Wwithin five years of his graduation, his writing skills matured and by 1832, he had published some of his finest tales like ‘The Hollow of the Three Hills’, ‘My Kinsman, Major Molineuz’ and ‘Roger Malvin’s Burial’ in various magazines and annuals.
From 1836 to 1839, Hawthorne served as the editor of the ‘American Magazine of Useful and Entertaining Knowledge’.
In 1837, his first signed book ‘Twice-Told Tales’ came out, which was a collection of all his previously published short stories.
On January 17, 1839, he was appointed as weigher and gauger at the Boston Custom House at a salary of $1,500 a year. Hawthorne served there for a year.
For six months in 1841, Hawthorne stayed at the agricultural cooperative ‘Brook Farm’, in West Roxbury, Mass.
In April 1846, Hawthorne was formally appointed as the "Surveyor for the District of Salem and Beverly and Inspector of the Revenue for the Port of Salem" at a yearly salary of $1,200. Hawthorne lost this job after the presidential election of 1848, due to a change in government.
In 1848, he was appointed as the corresponding secretary of the Salem Lyceum.
In mid-March 1850, Hawthorne published ‘The Scarlet Letter’ which became one of his best-selling books. It had a preface which referred to his three-year term in the Custom House.
Continue Reading Below
His most productive period was his years in Lenox, Massachusetts. He published three successful novels ‘The House of the Seven Gables’ (1851), ‘Blithedale Romance’ (1852) and ‘Tanglewood Tales’ (1853).
During the 1852 presidential election, he wrote a campaign biography of his old friend Franklin Pierce, titled ‘The Life of Franklin Pierce’.
In 1853, Pierce won the Presidential election, and Hawthorne was appointed the United States’ consul in Liverpool, Lancashire.
Hawthorne carried out his consular duties sincerely and effectively till 1857.
After spending a year and a half in Italy, Hawthorne came back to England and produced ‘The Marble Faun’ in 1860.
In 1862, he published the essay ‘Chiefly about War Matters’, based on his visit to Washington D.C, at the outset of the American civil War. 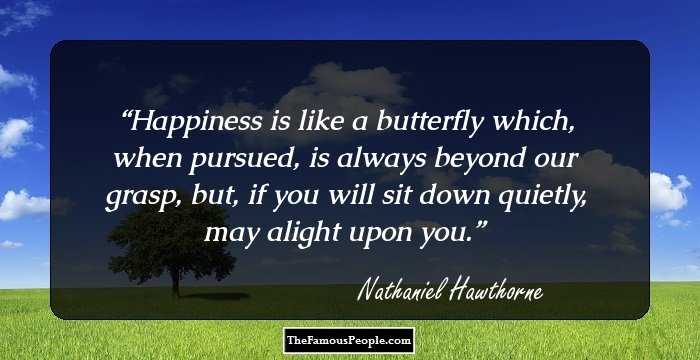 Quotes: You, Like, Will, Happiness
Major Works
‘The Scarlet Letter’ (1850) is considered to be Hawthorne’s masterpiece. It was one of the first mass-produced books in America and sold 2,500 volumes within ten days. ‘The House of the Seven Gables’ (1851) was another successful work which was based on the legend of a curse in Hawthorne’s own family. Apart from these, ‘Mosses from an old Manse’ (1846), ‘The Blithedale Romance’ (1852) and ‘The Marble Fawn’ (1860) are his most notable works.
Personal Life & Legacy
Hawthorne got married to Sophia Peabody on July 9, 1842, in the Peabody parlor on West Street, Boston.
Soon after their marriage, the couple moved to The Old Manse in Concord, Massachusetts, where Hawthorne wrote his ‘Mosses from an Old Manse’.
The couple had two daughters, Una (named after a character in Spenser’s ‘The Faerie Queene’) and Rose and a son, Julian.
Hawthorne’s health had been failing him for a long time and on May 19, 1864, while on a tour of the White Mountains he died in Plymouth, New Hampshire.
He was buried in Sleep Hollow Cemetery, Massachusetts. 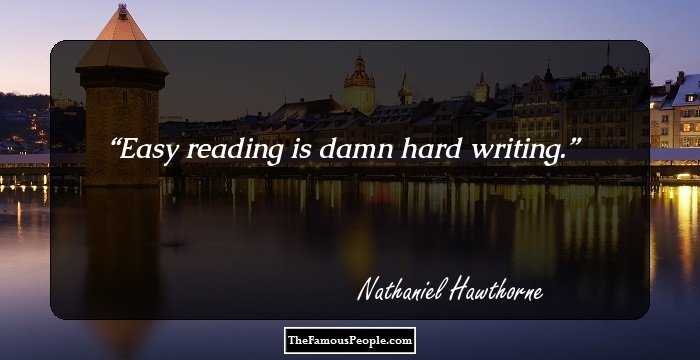 Trivia
At Lenox, Hawthorne came in contact with novelist Herman Melville. Melville looked up to this senior author and even dedicated his ‘Moby Dick’ to Nathaniel Hawthorne. However, he later realised that the friendship was one-sided and touched upon this disillusionment in his introduction to ‘The Piazza Tales’.

Quotes By Nathaniel Hawthorne | Quote Of The Day | Top 100 Quotes

See the events in life of Nathaniel Hawthorne in Chronological Order