George Burns was an entertainer best known for his comedy acts with his partner and wife, Gracie Allen. His on stage persona characterized by his arched eyebrow and the ever-present cigar was much loved by his fans for his mild banter and natural comedic abilities. Born as Nathan Birnbaum, he adopted his stage name George Burns when he began performing. After losing his father at a young age the boy took to small odd jobs in order to support his family. A naturally talented youngster he began singing harmony with other boys on the streets in order to earn pennies. After realizing his flair for comedy he began performing comedy routines often partnering with girls. It was during one such performance that he met his future partner and wife Gracie Allen. George and Gracie hit it off as a successful on-stage couple and appeared together in a number of radio programs, stage performances and motion pictures. Burns enjoyed a long and productive career that spanned over three quarters of a century. He was also one of the few entertainers who could carve a successful career in the media of vaudeville, radio, film and television. He was a very active individual with a deep love for his profession; he continued performing till late in his life and won the Academy Award for Best Supporting Actor when he was 79.
Continue Reading Below 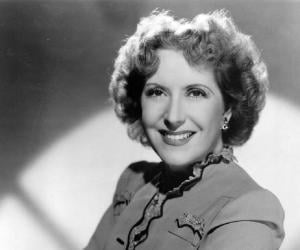 American Celebrities
Jewish Comedians
Actors
Singers
Comedians
Childhood & Early Life
He was born as one of the twelve children of Louis and Dorah Birnbaum. His parents were Jewish immigrants to the U.S. His father was a cantor at the local synagogue.
His father died of influenza when the boy was just six or seven years of age. In order to support his family he took up odd jobs like shining shoes and selling newspapers.
He was once working at a candy shop with some other boys of a similar age. The boys used to sing harmony in the basement in order to entertain themselves. Often people would stop to hear the boys sing and gave them pennies. This inspired him to enter the show business. 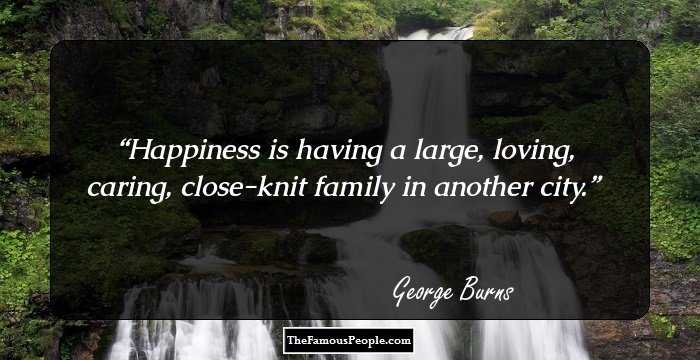 Quotes: Family, Happiness
Continue Reading Below
You May Like

Who Is The Most Popular BTS Member?
Career
He changed his name from Nathan Birnbaum to George Burns on his entry into the show business. He often used to perform dance routines or comedy which required him to partner with girls. In spite of having performed with several girls he never really clicked with anyone until he met Gracie Allen in 1923.
The two immediately struck a chord with the audience and began a long and successful professional partnership that would soon culminate in marriage. Their comedic routine had Gracie playing the ‘straight man’ while George delivered the punch lines.
The duo soon realized that it was Gracie who elicited more laughter and was more inclined towards comedy. The couple then reversed their roles with George playing the straight man and Gracie providing the punch lines.
Their new act was so hilarious that they became very popular and were sought after performers on the vaudeville. They were also highly consistent and dependable that they soon found a place at the Palace Theatre in New York.
Burns not only performed, but also wrote the early scripts which had the audiences rolling with laughter. He was a brilliant comedy writer though he received no credit for it at that time. He developed the entire concepts and dialogues for the characters played by him and Gracie.
Their fame enabled them to make their entry into radio and films during the 1930s. They acted in supporting roles in the 1932 musical comedy ‘The Big Broadcast’.
The couple also got a big break on the radio with their own show ‘The George Burns and Gracie Allen Show’ which aired in 1932 on the NBC network. The show was highly successful and had more than 40 million listeners during the late 1930s. The show ran till 1950.
The radio show was based on the duo’s classic comedy routines and short sketch comedies. During the show’s initial years, George and Gracie played the roles of young singles which gradually metamorphosed into that of a married couple as the years wore on.
Over the decade of 1930s, they appeared in several Hollywood films such as ‘International House’ (1933), ‘Six of a Kind’ (1934), ‘A Damsel in Distress’ (1937), and ‘College Swing’ (1938).
Continue Reading Below
‘The George Burns & Gracie Allen Show’ made a successful transition to television in 1950. Several changes were made to the show for its television adaptation. The show was highly successful and ran till 1958 when Gracie was forced to retire because of heart problems.
George and Gracie founded a company, McCadden Corporation which filmed television shows and commercials. The company produced shows like ‘The Bob Cummings Show’, ‘The People’s Choice’ and ‘Mister Ed’.
The aging performer’s career saw resurgence when he was asked to play Al Lewis, an elderly vaudevillian actor in the 1975 comedy ‘The Sunshine Boys’. His role was widely acclaimed. He went on to appear in several other movies even after reaching the ripe old age of 80. 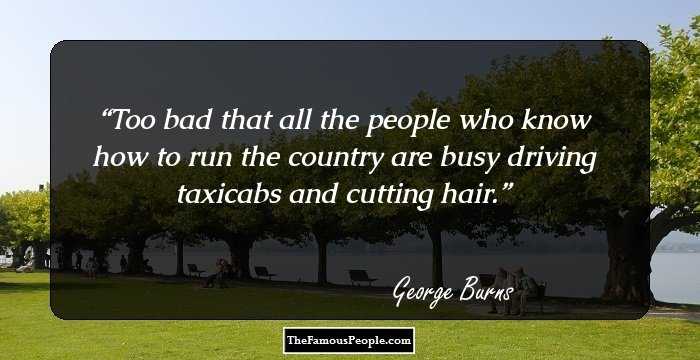 Major Works
He was a world-renowned comedian and actor whose career spanned over three fourth of a century. He was highly respected and much loved for being one of the few entertainers who had a successful career in not just vaudeville, but also in radio, television and films.
Awards & Achievements
He won the Academy Award for the Best Supporting Actor for his role as Al Lewis in the movie ‘The Sunshine Boys’ in 1975 when he was 79 years old. 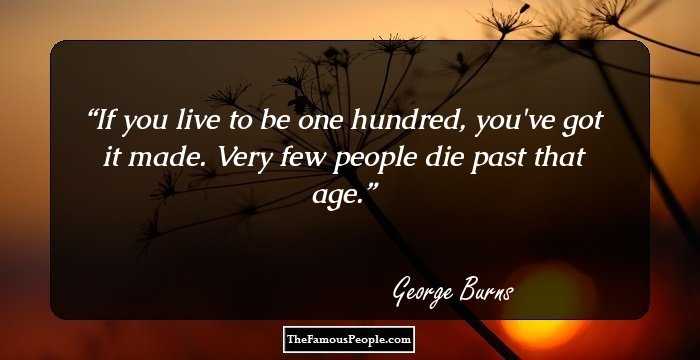 Quotes: You, Past
Personal Life & Legacy
He had a brief marriage with his co-performer Hannah Siegal that was conducted for purely professional reasons. The marriage was never consummated and the couple divorced within months of their so-called marriage.
He married Gracie Allen, his professional partner, in 1926. The couple adopted two children. They shared a loving marriage that lasted till Gracie’s death in 1964.
He died in 1996, a few weeks after celebrating his 100th birthday.
Trivia
At the time of his Academy Award win, he was the oldest ever performer to receive the honour.
The legendary comedian shared a very close friendship with Jack Benny which lasted for over five decades.
He was also a best selling author who had written ten books.

Quotes By George Burns | Quote Of The Day | Top 100 Quotes

See the events in life of George Burns in Chronological Order