Natalie Imbruglia, the Australian beauty who took the world by storm with her brilliant singing talents, has risen to become of the most popular and sought after singer-songwriters. A strong and determined woman right from the beginning, she was trained to become a ballet and tap dancer, which according to her taught “discipline and steadfastness”. Despite only a few numbers of albums to her name, she has gained a huge fan-following all over the world. She broke several records as a newcomer and her career has been on an upswing since then. She won an array of awards which include the MTV Music Video Awards, the Australian Record Industry Awards, the MTV Europe Video Music Awards, and the Billboard Music Awards. She has also teamed up with some of the greatest singers and songwriters to produce several of her albums. Apart from being renowned as a singer, Imbruglia has gained fame as a fashion icon as well. She is being hunted by several big brands to represent them and has been modeling for the distinguished cosmetic brand L'Oréal. Imbruglia has also been associated with humanitarian causes and has supported various campaigns to raise awareness on breast cancer and clinical depression, among others global issues. Read about this scintillating beauty in the article below and learn about her life and singing career. Roseanne Park
DID WE MISS SOMEONE?
CLICK HERE AND TELL US
WE'LL MAKE SURE
THEY'RE HERE A.S.A.P
Quick Facts

Australian People
British People
Pop Singers
Australian Women
British Women
Women Singers
Childhood & Early Life
Born to Elliot Imbruglia and mother Maxene Anderson, Natalie grew up in Berkeley Vale, New South Wales before moving to Sydney with her family.
As a child she used to attend ballet, tap, and highland dancing classes and at the age of 16 she quit high school to pursue a career in acting.
She landed herself a role in the Australian soap opera ‘Neighbors’, but left in the second years of its production and moved to London in 1994. 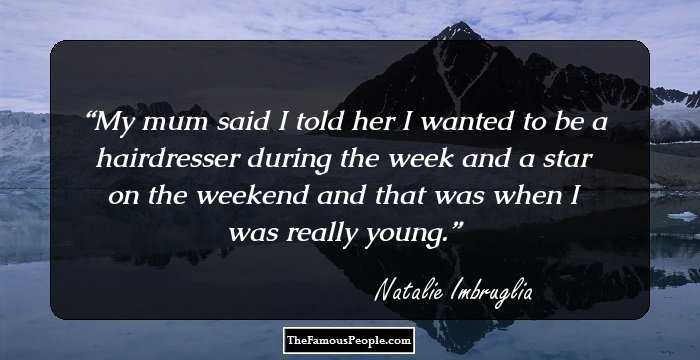 Quotes: Young
Continue Reading Below
Career
In 1997, she released her debut single ‘Torn’ which became an instant worldwide hit. She received a Grammy nomination and received several other awards. The song was a part of her first album ‘Left of the Middle’.
After the huge and unprecedented success of ‘Left of the Middle’, she released her second album ‘White Lilies Island’ in 2001, from which the single ‘Wrong Impression’ was the most popular song.
In 2003, she made her acting debut with the successful movie ‘Johnny English’, a British Comedy, alongside actor Rowan Atkinson, playing the supporting role, ‘Lorna Campbell’.
Her third studio album ‘Counting Down the Days’ was released in April 2005. The song ‘Shiver’ enjoyed huge success, somewhat similar to that of ‘Torn’, becoming one of the most played songs of 2005.
‘Come to Life’, her next album from 2009, was released in two different dates in Australia and Europe. Owing to certain issues, the album could not be released in UK.
She made her second film appearance in 2009 movie ‘Closed for Winter’ as ‘Elise Silverston’. The film enjoyed moderate success.
In 2010, she was selected to the judging panel of the famous reality singing show ‘The X Factor’, in Britain. 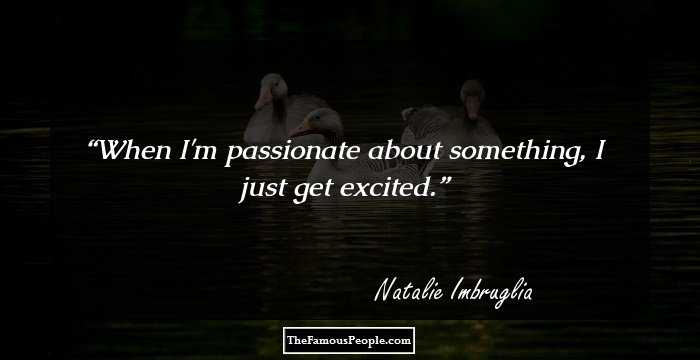 Major Works
The single ‘Torn’ from her debut album ‘Left of the Middle’ is by far her biggest achievement. It peaked at no. 2 spot in the UK Singles chart in 1997 and upon its radio release in the US it hit No. 1 on the Billboard's Hot 100 Airplay chart, occupying the spot for 14 weeks.
Continue Reading Below
The song ‘Big Mistake’ from her debut album, ‘Left of the Middle’ was also very successful, reaching no. 2 in UK. ‘Left of the Middle’ received a platinum certification by the Recording Industry Association of America and was certified 2X platinum later.
Her next big hit was the single ‘Shiver’ from her third studio album ‘Counting Down the Days’. It hit the 8th spot on the official UK Top 75 Singles Charts, reaching no.1 on the UK Airplay Chart. The song sold roughly 500,000 copies worldwide.
Awards & Achievements
‘Torn’ earned Imbruglia, three Grammy nominations in 1998 and helped her grab the MTV Video Music Awards for Best New Artist and the MTV Europe Music Awards for Best Song.
In 1999, she received the BRIT Awards and American Music Awards for her debut album ‘Left of the Middle’.
Imbruglia has always been in the spotlight for her glamour and fashion and in 2004, she was ranked the 6th most naturally beautiful woman of all times. 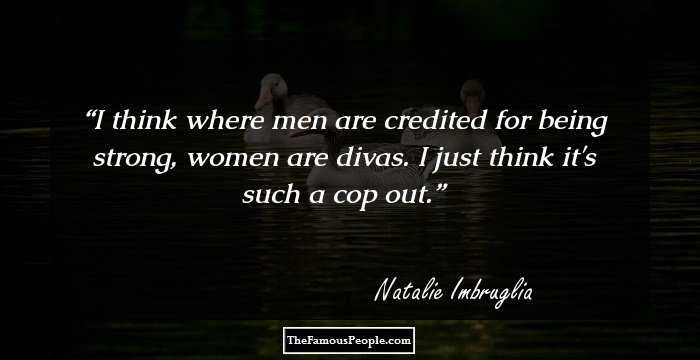 Quotes: Think, Women
Personal Life & Legacy
She married Daniel Johns, the lead singer of the Australian rock band ‘Silverchain’ on New Year’s Eve, 2003. They announced their divorce on 4th of January 2008.
She is also the eldest sister of Laura Imbruglia, a singer and songwriter.
She supports a number of global humanitarian campaigns. She served as the ambassador of ‘The Virgin Foundation’, a private charitable organization.
Trivia
This famous Australian singer-songwriter who became popular world-wide with her debut song ‘Torn’ auditioned for some Australian television commercials including, Coca-Cola, before becoming famous.

Quotes By Natalie Imbruglia | Quote Of The Day | Top 100 Quotes

See the events in life of Natalie Imbruglia in Chronological Order