‘I Live to Laugh and I Laugh to Live’ quoted by Milton Berle rightly describes his life as a whole. One of the ace stand-up comedians of his time, he was popularly referred to as ‘Mr Television’ and ‘Uncle Miltie’ during television’s Golden age. A prodigious child, he had inherent talent and acting skills, which is prominent from the fact that he took the entertainment industry by storm at the tender age of five. No sooner than at the age of twelve, he had carved a niche for himself with his inherent artistic talent. His debut television appearance with ‘Texaco Star Theatre’ only doubled his fame and glory making him a household name. Interestingly, he made his presence felt at all the major mediums of entertainment then, be it radio, television or live performance. People longed to hear him say or watch him show his antics on stage and television so much so that theatres, restaurants and business complexes closed their operations for an hour so as to not miss out on his antics. Even cinema halls reported fewer bookings for Tuesday night for shows that coincided with ‘Texaco Star Theatre’ timings. Being a stand-up comedian apart, he was a great philanthropist and a permanent fixture at charity benefits in the Hollywood area. He was instrumental in raising millions for charitable causes. To know more about his life and profile, read on.
Continue Reading Below

American Celebrities
Jewish Comedians
Actors
Comedians
American Men
Childhood & Early Life
Milton Berle was born in a Jewish family as Milton Berlinger to Moses Berlinger and Sarah Glantz Berlinger in the Harlem neighbourhood of Manhattan in 1908. His father was a paint and varnish salesman.
A prodigious child, he entered the world of showbiz at the tender age of five, mimicking the legendary comic personality of Charlie Chaplin in a talent contest and eventually winning the same.
No sooner his in-born talent and acting skills were recognized by the who’s who of the industry, who started offering young Berlinger acting roles. Some of the early silent films in which he was cast includes ‘The Perils of Pauline’, ‘The Mark of Zorro’ and ‘Tillie’s Punctured Romance’.
He was even part of other silent films of the decade including, ‘Bunny's Little Brother’, ‘Tess of the Storm Country’, ‘Birthright’, ‘Love's Penalty’, ‘Divorce Coupons’ and ‘Ruth of the Range’.
In 1916, he enrolled in the Professional Children’s School to further polish his acting skills. 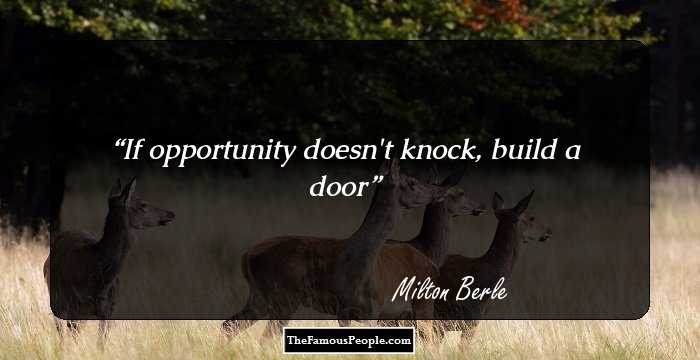 The Hottest Male Celebrities With The Best Abs
Career
He made his official stage debut in 1920 in the revival of the musical comedy Florodora in Atlantic City, New Jersey. Four years later, he was roped in to serve as the MC or Master of Ceremonies in vaudeville. Same time, he officially changed his name to Milton Berle.
Beginning of the 1930s decade, he became a successful stand-up comedian. It was this rising popularity and newly received star status that earned him a role in Jack White’s topical musical theatrical ‘Poppin' the Cork’. In addition to acting, he even co-wrote the score for the film.
He continued his tryst with songwriting as well, penning the lyrics of the title song for the RKO Radio Pictures release ‘Li'l Abner’. Furthermore, he even wrote Spike Jones B-side, ‘Leave the Dishes in the Sink, Ma’.
He made his debut radio appearance in 1934 for the show, ‘The Rudy Vallee Hour’ which lasted until 1936. Furthermore, he became popular with ‘The Gillette Original Community Sing’ which was a comedy variety program on CBS. In 1939, he served as host for the show, ‘Stop Me If You've Heard This One’.
Though he gained a lot of popularity for his radio programs, it was his live acts that people waited for. As such, by 1940s, he became the highest paid night club performer. However, to make a flourishing career on the radio, he concentrated on the same.
He started with the comedy variety show, ‘Three Ring Time’ which was followed by a pogram by Campbell’s Soups Company. He was even part of the 1944-45 audience participation show, ‘Let Yourself Go’. The 1946 CBS show, ‘Kiss and Make Up’ had him serving as the judge. The program featured the problems of contestants decided by a jury from studio audiences.
‘The Texaco Star Theatre’ was his last radio series which began in 1948 and continued until 1949. Apart from him, the show had several other cast members including, Charles Irving, Kay Armen, and Al Kelly.
The successful radio career paved way for yet another experimentation as he tried to make a career in the then-emerging medium, television. Year 1948 had NBC launch ‘Texaco Star Theatre’ to television, with him being the permanent host for the series by October.
‘Texaco Star Theatre’ further augmented his popularity with viewers going gaga about his slapstick comedy and bizarre dressing sense. In no time, the show acquired the number 1 slot on in the Nielsen ratings with as much as 80% viewership.
Continue Reading Below
By 1949, the sales graph of the television boxes witnessed a grand leap as more and more people tuned to ‘Texaco Star Theater’. The newly earned fame gave him a superstar status as he became reckoned as ‘Mr. Television’ and ‘Uncle Miltie’ by the people.
For keeping the gags meter on a roll, he joked aggressively and went on to extremes even dressing up as a woman to get the audience into splits of laughter. He used the newly found star status to the maximum by bringing on black performers on the show, the first-of-its-kind effort.
The upward escalating and ever-booming career witnessed a lag and then a decline when he lost the Texaco show as a sponsor. He later served as the host for the Buick car company show which was renamed, ‘The Buick-Berle Show’. The show was eventually renamed, ‘The Milton Berle Show’ in its final season.
Singing off from the 1955 ‘The Milton Berle Show’, he made several attempts to recapture the earlier success but in vain. He was cast opposite Phil Silvers in the latter’s show, ‘The Phil Silvers Show’. Furthermore, he made guest appearance in shows such as ‘The Love Boat’ and ‘Batman’. In the latter, he was seen in a recurring role of the villain ‘Louie the Lilac’.
From 1958 until 1959, he appeared in the Kraft Music Hall series. By 1960, his career profile was limited to serving as the host to the bowling program, ‘Jackpot Bowling’.
TV career apart, he regularly appeared on live shows in Las Vegas to packed audiences at Caesars Palace, the Sands, the Desert Inn and other casino hotels. Furthermore, other than clubbing, he was seen performing on Broadway in Herb Gardner's The Goodbye People in 1968
Some of the movies which had him as one of their casts includes, ‘’Always Leave Them Laughing’, ‘Let’s Make Love’,’It’s a Mad, Mad, Mad, Mad World’, ‘The Loved One’, ‘The Oscar’, ‘Who's Minding the Mint?’ and ‘Driving Me Crazy’.
His stint at television continued as he made appearances in a variety of shows including, ‘The Barbara Stanwyck Show’, ‘The Lucy Show’, ‘The Jackie Gleason Show’, ‘Get Smart’, ‘Laugh-In’, ‘The Sonny & Cher Comedy Hour’, ‘The Hollywood Palace’, ‘Ironside, F Troop’, ‘Fantasy Island’, and ‘The Jack Benny Program’.
Towards the end of his career, he served as the guest host for the NBC’s popular show, ‘Saturday Night Live’. However, this did not continue for long as he was banned from hosting the show again due to his peculiar stage antics. In fact, in the 2003 re-run his episode was not even aired on television.
Continue Reading Below
He was cast in the 1992 series ‘The Fresh Prince of Bel-Air’. Other than this, he also appeared in ‘Beverly Hills 90210’ and ‘The Nanny’.
Year 2000 marked his last official appearance on television, as he guest starred in ‘Two Heads are Better than None’ 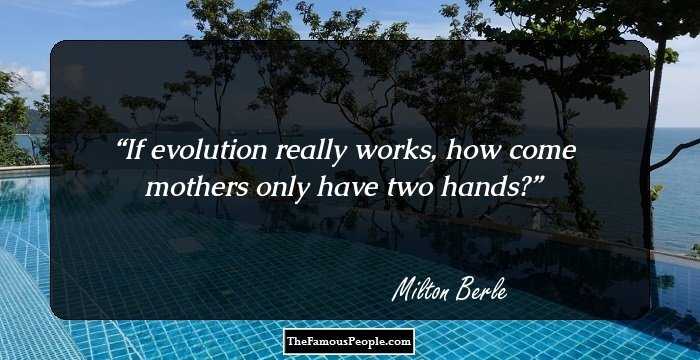 Awards & Achievements
He was bestowed with an Emmy award for the first season of his show, Texaco Star Theatre’. Later on, he received an Emmy award nomination on the ‘Doyle Against The House’ for playing the lead character.
He was listed in the Guinness Book of World Records for the greatest number of charity performances made by a show-business performer.
He was conferred with an award for entertaining at stateside military bases in World War I as a child performer, in addition to traveling to foreign bases in World War II and Vietnam.
In 1984, he was one of the first seven people to be inducted into the Television Academy Hall of Fame.
In 1991, he became the first entertainer to be inducted into the International Comedy Hall of Fame.
In 2007, he was inducted into the California Hall of Fame by California Governor Arnold Schwarzenegger and First Lady Maria Shriver
Personal Life & Legacy
He twice married Joyce Mathews and divorced her before typing the nuptial knot with Ruth Cosgrove, a onetime publicist in December 1953. She died in 1989.
He remarried Lorna Adams in 1992, a fashion designer who was 30 years younger to him. The couple was blessed with two children, Victoria and William. He had two stepdaughters as well.
It was reported in April 2001 that he was suffering from cancerous tumor in his colon. Not willing to undergo an operation, he breathed his last the following year, on March 27, 2002, due to colon cancer.
Despite having made detailed arrangements of his cremation with his ex-wife Ruth at Mount Sinai Memorial Park Cemetery in Burbank, he was cremated and interred at Hillside Memorial Park Cemetery in Culver City, California 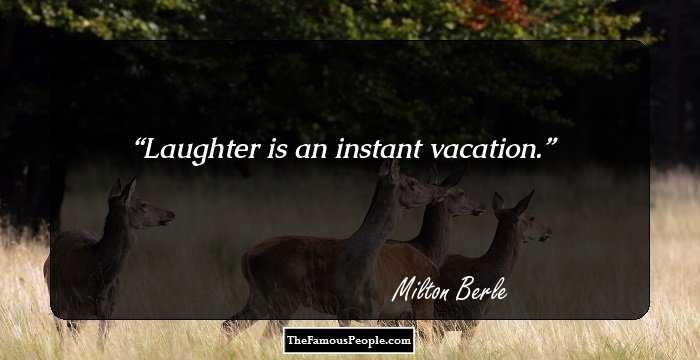 Trivia
Star of the ‘Texaco Star Theatre’ fame, he held the reputation of always opening the television show by making an entrance in a different costume each week.

Quotes By Milton Berle | Quote Of The Day | Top 100 Quotes

See the events in life of Milton Berle in Chronological Order