Michael Keaton is an American actor, producer, and director, best known for his performance in the movie ‘Birdman.’ A versatile actor, he is adept at playing comedic as well as dramatic roles. He has also portrayed a few romantic characters and appeared in several action thrillers in his career. He developed an interest in acting and performing when he was in his teens, and tried his luck at stand-up comedy as a young man. His comedy career was not successful, though it paved the way for his acting career. Unable to find success as a comedian, he took up a job as a television cameraman in a cable station. It was while working there that he realized that he actually wanted to be in front of the camera. He then managed to land a television role and appeared in several episodes of ‘Mister Rogers' Neighborhood.’ He was a naturally gifted actor and soon became popular on television. He embarked on a film career with great ambitions and found considerable fame with his comedic roles. He earned further acclaim when he portrayed the eponymous superhero in Tim Burton's ‘Batman.’ With time, he matured as an actor and also ventured into production and direction. He received several awards and nominations for his performance in the 2014 film ‘Birdman.’ Austin Butler
5th September In History
DID WE MISS SOMEONE?
CLICK HERE AND TELL US
WE'LL MAKE SURE
THEY'RE HERE A.S.A.P
Quick Facts

American People
Pennsylvania Actors
Kent State University
Virgo Actors
American Actors
Childhood & Early Life
Michael Keaton was born Michael John Douglas on September 5, 1951, in Kennedy Township, Allegheny County, Pennsylvania, USA. His father George A. Douglas worked as a civil engineer and surveyor, and his mother Leona Elizabeth was a homemaker. He was the youngest of seven children.
He attended ‘Montour High School’ in Pennsylvania. He then studied speech for two years at ‘Kent State University,’ before dropping out and moving to Pittsburgh. While at school, he used to perform humorous skits to entertain his classmates. 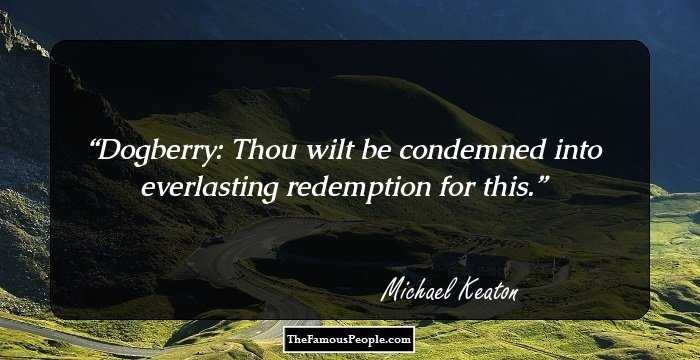 Continue Reading Below
Career
He tried to pursue a career as a stand-up comedian, but was not successful. In order to make ends meet, he took up job as a television cameraman at the public television station, WQED (TV). It was during this time that he realized that he wanted to work in front of the cameras.
He began auditioning for television roles and made appearances in Pittsburgh public television programs, including ‘Where the Heart Is’ and ‘Mister Rogers' Neighborhood’ (1975). In the latter, he was seen as one of the ‘Flying Zookeeni Brothers.’
Determined to make his mark as an actor, he moved to Los Angeles, looking for more opportunities. Naturally talented and charismatic, he proved to be skilled at playing comedic roles. It did not take him long to land parts in television shows like ‘Maude’ and ‘The Mary Tyler Moore Hour.’
Once he became a popular television actor, he changed his surname to ‘Keaton’ in order to avoid confusion with well-known actor Michael Douglas and daytime host Mike Douglas.
Michael Keaton ventured into films following his television stint and made his film debut with a small non-speaking role in Joan Rivers’ film ‘Rabbit Test.’ During this period, he also worked with James Belushi in the short-lived comedy series ‘Working Stiffs.’ He also appeared in comedy hits, such as ‘Mr. Mom,’ ‘Johnny Dangerously,’ and ‘Gung Ho.’
He got his first big break in 1988 when he was offered the title role in Tim Burton’s horror-comedy ‘Beetlejuice.’ The film, which also had prominent actors like Alec Baldwin, Geena Davis, Catherine O'Hara, and Winona Ryder, was a hit and catapulted Keaton to worldwide fame.
Tim Burton played an important role in boosting Keaton’s career when he cast him as the iconic comic book superhero in the film ‘Batman’ in 1989. Keaton, who had primarily played comic roles until then, was initially believed to be the wrong choice to play Batman. However, he silenced his critics with an amazing performance in the movie which went on to become a big hit. Keaton later reprised the role for the sequel ‘Batman Returns’ (1992).
His career thrived throughout the 1990s, and he appeared in several films like ‘Pacific Heights’ (1990), ‘One Good Cop’ (1991), ‘My Life’ (1993), ‘Much Ado About Nothing’ (1993), ‘The Paper’ (1994), ‘Out of Sight’ (1998), and ‘Jack Frost’ (1998).
Having started out as a comedian, he gained significant acclaim for his portrayal of dramatic roles. He also proved himself to be skilled at performing action sequences. He remained active throughout the 2000s and worked in films like ‘A Shot at Glory’ (2000), ‘First Daughter’ (2004), ‘Herbie: Fully Loaded’ (2005), and ‘The Merry Gentleman’ (2008).
He was offered the role of his life in 2014 when he was asked to play ‘Riggan Thomson/Birdman’ in the satirical black comedy-drama film ‘Birdman.’ The film, which focuses on the fading career of a Hollywood actor, went on to become a huge critical as well as commercial hit.
In 2015, he appeared in the Tom McCarthy-directed ‘Academy’ award-winning biographical drama film ‘Spotlight’ where he played the investigative reporter ‘Walter V. Robinson.’ The following year, he played businessman Ray Kroc in the biographical film ‘The Founder.’
2017 saw Keaton appearing as the super villain ‘Vulture’ in Marvel’s super hero film ‘Spider-Man: Homecoming.’ The movie was a critical and commercial blockbuster. That year, he also appeared in the movie ‘American Assassin.’
After playing the antagonist in the fantasy adventure film ‘Dumbo’ in 2019, he went on to play ‘Kenneth Feinberg’ in the 2020 biographical film ‘Worth.’
Major Work
Michael Keaton is best known for his role as ‘Riggan Thomson,’ a Hollywood actor once famous for playing the role of a superhero named ‘Birdman.’ The film follows the actor’s life as he desperately tries to resurrect his career. Keaton received critical praise for this role which earned him several accolades and an ‘Academy Award’ nomination.
Awards & Achievements
He won a ‘Golden Globe Award’ for ‘Best Actor in a Musical or Comedy’ and the ‘Critics' Choice Award’ for ‘Best Actor’ for his performance in ‘Birdman’ (2014). He was nominated for ‘Screen Actors Guild Award,’ ‘British Academy Film Award,’ and ‘Academy Award’ for ‘Best Actor’ for the same role.
Personal Life & Legacy
Michael Keaton married actress Caroline McWilliams in 1982. In 1983, they were blessed with a son whom they named Sean Douglas. Sean went on to become a songwriter and record producer. Keaton and McWilliams divorced in 1990.

See the events in life of Michael Keaton in Chronological Order