(One of the Most Versatile and Highest-Grossing Actors of Hollywood)

Matthew McConaughey is one of the leading actors in Hollywood. He first tasted stardom with the critically successful film ‘Dazed and Confused.’ Born into a middle class family, this charming Texan, unlike his brothers, refused to join his father’s business. He had a mind of his own and chose to go to Australia as an exchange student. Upon his return, he went to the ‘University of Texas’ at ‘Austin College of Communication,’ graduating with a degree in film, television, and radio. He initially appeared in a few TV commercials and played minor roles in a couple of films, before getting a breakthrough in the Joel Schumacher thriller film, ‘A Time to Kill.’ His film career soon took a big leap and he received many acting offers. Some of his well-known films include, ‘Amistad,’ ‘EDtv,’ ‘Ghosts of Girlfriends Past,’ ‘The Wedding Planner,’ ‘How to Lose a Guy in 10 Days,’ ‘The Lincoln Lawyer,’ ‘Dallas Buyers Club,’ ‘Interstellar,’ and ‘Magic Mike.’ He is a passionate animal lover and the founder of ‘Just Keep Livin Foundation,’ which is dedicated to improve the lives of high school children. education: University Of Texas At Austin, Moody College Of Communication

American People
American Men
Texas Actors
University Of Texas At Austin
Tall Celebrities
Childhood & Early Life
Matthew David McConaughey was born on November 4, 1969, in Uvalde, Texas, USA, to James Donald McConaughey, a gas-station owner and oil supplier, and Mary Kathleen, a kindergarten teacher.
His family relocated to Longview, Texas, where he attended ‘Longview High School.’ In high school, he was voted ‘most handsome’ in the ‘Longview Lobo Yearbook.’
In 1988, he moved to Warnervale, New South Wales, Australia for a year as part of an education exchange program. He was a Rotary exchange student. He later attended the ‘University of Texas’ at ‘Austin College of Communication.’
In 1993, he graduated from the ‘University of Texas’ with a B.S. degree in radio-television-film. During his time at the university, he was a member of the ‘Delta Tau Delta International Fraternity.’ 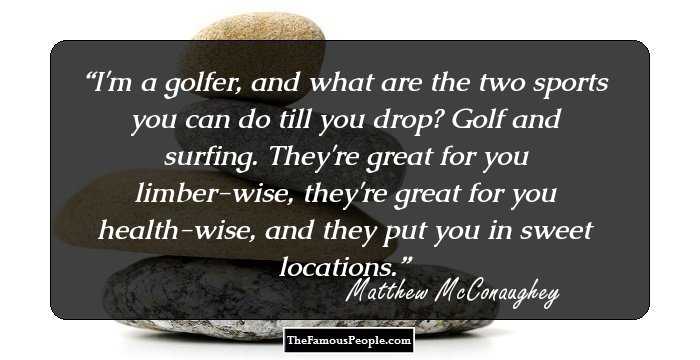 Quotes: You
Continue Reading Below
Career
In 1991, he began his career in the entertainment industry. He appeared in a series of TV commercials, before landing a role in the coming of age comedy film ‘Dazed and Confused,’ which earned immense critical acclaim.
He was seen playing minor roles in a series of films like ‘Texas Chainsaw Massacre: The Next Generation,’ ‘Boys on the Side,’ and ‘Angels in the Outfield.’ He was also seen in the TV series ‘Unsolved Mysteries.’
In 1996, he got his big break in the Joel Schumacher thriller film ‘A Time to Kill,’ in which he played the role of a lawyer named Jake Brigance. This critically acclaimed film was an adaptation of John Grisham’s novel of the same name.
In 1997, he starred in the Academy Award-nominated historical drama film ‘Amistad,’ which was directed by Steven Spielberg. The film received good reviews from film critics.
In 1999, he played the role of Edward ‘Ed’ Pekurny in the American comedy film ‘EDtv,’ which was directed by Ron Howard. The following year, he was seen in a film titled ‘U-571.’
In 2000, he appeared in an episode titled ‘Escape from New York’ in the popular TV series ‘Sex and the City.’ The next year, he starred in the romantic comedy film ‘The Wedding Planner.’
In 2002, he starred in the film ‘Reign of Fire.’ The same year, he was seen in films, such as ‘Thirteen Conversations About One Thing,’ a drama film, and ‘Frailty,’ a psychological thriller.
In 2003, he appeared in the TV series documentary, ‘Freedom: A History of Us.’ That year, he also played the character of Steven Bedalia in the film ‘Tiptoes.’ He even starred in the romantic comedy film ‘How to Lose a Guy in 10 Days.’
In 2005, he played Brandon Lang in the film ‘Two for the Money’ and also acted in the action-comedy adventure film ‘Sahara.’ He voiced Al Bean in ‘Magnificent Desolation: Walking on the Moon 3D,’ a 3D documentary film.
Continue Reading Below
In 2006, he played Jack Lengyel in the historical drama biopic film ‘We Are Marshall,’ which was directed by McG. In 2008, he starred in the American adventure film ‘Fool’s Gold.’
In 2008, he also starred in the action comedy film ‘Tropic Thunder,’ which was immensely successful at the box office. That year, he was also seen as Steve Addington in the film ‘Surfer, Dude.’
In 2009, he starred opposite Jennifer Garner in the romantic comedy film, ‘Ghosts of Girlfriends Past.’ The film was a commercial success but received negative reviews from critics.
In 2010, he starred in the American TV comedy series ‘Eastbound & Down,’ which was broadcast on ‘HBO.’ He was seen in three episodes of the show. The following year, he starred in the film ‘The Lincoln Lawyer.’
In 2012, he played the title role in the coming-of-age drama film ‘Mud,’ which was directed by Jeff Nichols. That year, he was also seen in films, such as ‘Magic Mike’ and ‘The Paperboy.’
In 2013, he appeared in the biographical drama film ‘Dallas Buyers Club.’ He received appreciation for portraying a cowboy diagnosed with AIDS. The role earned him the ‘Academy Award’ for ‘Best Actor’ and ‘Golden Globe Award’ for ‘Best Actor – Drama.’ In addition to these two awards, he also won other awards and nominations. In 2013, he also starred in ‘The Wolf of Wall Street.’
He appeared in the first season of HBO’s crime anthology series ‘True Detective.’ For his performance as detective Rust Cohle, he won several awards and was nominated for ‘Primetime Emmy’ and ‘Golden Globe’ awards.
In 2014, Matthew starred as NASA pilot Joseph Cooper in the critically and commercially acclaimed science fiction movie ‘Interstellar.’ Directed by Christopher Nolan, the film also starred Anne Hathaway, Jessica Chastain, Matt Damon, and Michael Caine in important roles. The following year, he hosted an episode of ‘Saturday Night Live.’
In 2016, he voiced important characters in movies like ‘Kubo and the Two Strings’ and ‘Sing.’ In the next couple of years, McConaughey was seen in movies like ‘The Sea of Trees’ (2015), ‘Free State of Jones’ (2016), ‘Gold’ (2016), ‘The Dark Tower’ (2017), ‘White Boy Rick’ (2018), and ‘Serenity’ (2019).
Continue Reading Below 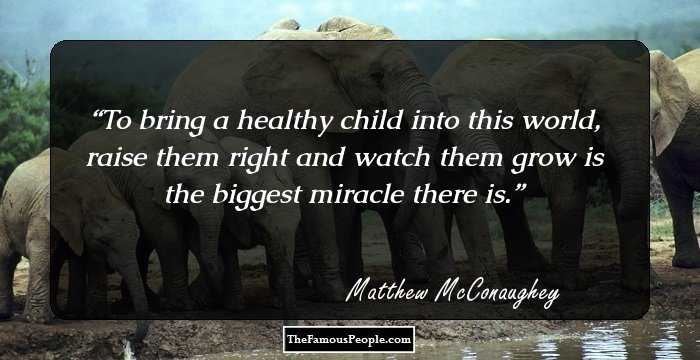 Quotes: Miracle
Major Works
He starred in ‘The Wedding Planner,’ which was a massive commercial success, earning $94,728,529 at the box office. The film was at number one position at the box office in its opening weekend.
He starred in the film ‘Magic Mike,’ a critical success that made it to several critics’ lists of ‘Best Film’ in 2012. The film received the ‘National Society of Film Critics Award’ and the ‘Independent Spirit Award.’
‘Dallas Buyers Club’ fetched him the ‘Academy Award’ for ‘Best Actor’ and the ‘Golden Globe Award’ for ‘Best Actor – Drama.’
He won the ‘Critics’ Choice Television Award’ for ‘Best Actor’ for his performance in the TV series ‘True Detective.’ He was also nominated under the same category at the 2015 ‘Golden Globes.’
His 2014 science fiction movie ‘Interstellar’ won the ‘Academy Award’ for ‘Best Visual Effects’ and was nominated under four other categories. He received a nomination for ‘Best Actor’ at the 2015 ‘Academy of Science Fiction, Fantasy & Horror Films, USA Awards.’
Awards & Achievements
He received the ‘MTV Movie Award’ for ‘Best Breakthrough Performance’ for the movie ‘A Time To Kill’ in the year 1996.
In 2012, he received the ‘New York Film Critics Circle Award’ for ‘Best Supporting Actor’ for ‘Bernie’ and ‘Magic Mike.’ The same year, he received an award from the ‘National Society of Film Critics’ and also won the ‘Independent Spirit Award’ for the film ‘Magic Mike.’
He won a ‘Saturn Award’ under the ‘Best Actor’ category for his role in the film ‘Killer Joe’ in 2013. 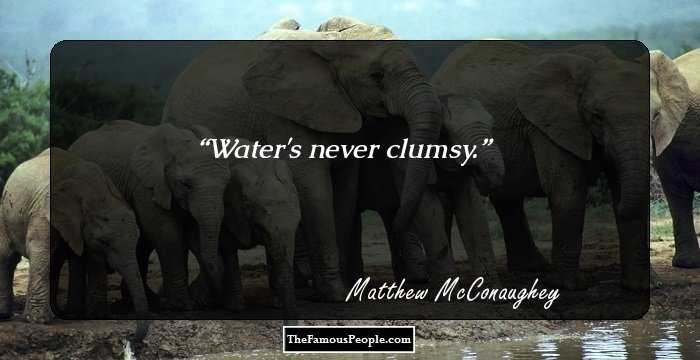 Quotes: Never
Personal Life & Legacy
‘Just Keep Livin Foundation,’ which he founded, is dedicated to improve the lives of high school students. The main objective of the foundation is to empower high school students and encourage them to live an active lifestyle.
He rescued several animals from danger in 2005 when the US was affected by Hurricane Katrina.
In 2012, he married his long-time girlfriend Camila Alves, a Brazilian model and television performer. They live in Austin, Texas, and have three children.
In April 2014, ‘Time’ magazine included McConaughey in its annual ‘Time 100’ as one of the ‘Most Influential People in the World.’
Trivia
This acclaimed actor was once arrested in Austin, Texas for playing the bongo drums late in the night. The police also found drugs in his home. The actor was fined and the drug charges were dropped.

Quotes By Matthew McConaughey | Quote Of The Day | Top 100 Quotes

See the events in life of Matthew McConaughey in Chronological Order