Martha Dandridge Custis Washington was the wife of George Washington, the first president of the United States. Even though she was technically the first “First Lady” of the United States, this title was not coined until after her death. Known as Lady Washington during her lifetime, she was a gracious hostess who entertained the many high profile guests of the president. She was also known for her generosity towards the Revolutionary war veterans to whom she provided financial help or assistance of any other kind. She was a wealthy young widow with children when she first met and married George Washington who was then a Colonel. She was a hard working and dutiful wife who became her husband’s caretaker after he was made General of the American Army by the Continental Congress. She skillfully enlisted the assistance of the women of the colonies to make financial contributions and gather supplies for the Continental Army. The presidential couple shared a marriage based on mutual respect and affection. Even though Martha found life as the First Lady to be stifling, she considered it her duty towards her husband to fulfill her responsibilities wholeheartedly. Along with her husband she continued receiving guests and socializing long after Washington’s Administration was over. Michelle Obama
2nd June In History
DID WE MISS SOMEONE?
CLICK HERE AND TELL US
WE'LL MAKE SURE
THEY'RE HERE A.S.A.P
Quick Facts

American People
American First Ladies
Gemini Women
Childhood & Early Life
She was born as the eldest daughter of John Dandridge and his wife Frances Jones. She had seven siblings and was also rumored to have two illegitimate half-siblings.
She was informally trained at home in music, sewing and household management. She also knew how to read and write, and had basic knowledge about animal husbandry and plantation management. 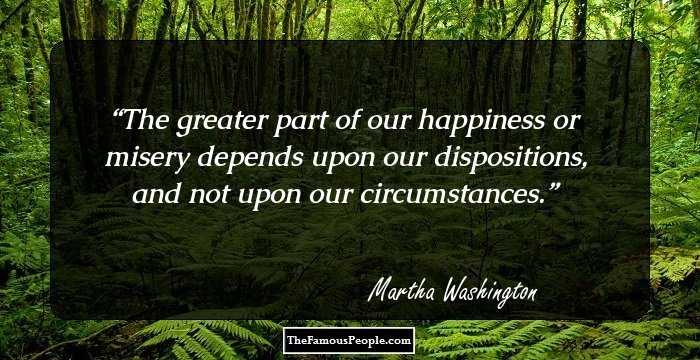 Who Is The Greatest Female Warrior In History?
Later Years
She married Daniel Parke Custis, a much older rich planter in 1750 when she was 18 years old. She had four children with him, of whom two died in childhood.
Her husband died in 1757 leaving her as a rich young widow. She had the full control over her dower inheritance which included properties and slaves. The skilled woman successfully ran the five plantations her husband had left her.
The young widow met Colonel George Washington who expressed an interest in marrying her. The couple was married in a grand ceremony in 1759. Together they raised Martha’s two surviving children.
She had a vast inheritance to take care of and was very skilled at managing the large staff of servants. Her husband managed the financial affairs of the plantations. The talented woman oversaw the processes of harvesting and processing of fruits and vegetables, dairy and meat products, herbs for making medicines, etc.
George was appointed the General of the American Army during the American Revolution by the Continental Congress. Martha enlisted the support of other women in the colonies and encouraged them to contribute financially and to gather supplies for the Continental Army during the bitter winter time.
After the colonies achieved their independence and the U.S. Constitution was ratified, George Washington was unanimously elected to be the country’s first president. His inauguration was held on 30th April, 1789.
She received several guests and hosted many affairs at New York and Philadelphia which were the temporary capitals after her husband came to office. She held Friday public receptions and also developed a friendship with Abigail Adams, wife of the vice president John Adams.
She served as the First Lady for eight years till 1797. Used to living a free and uninhibited life before becoming the first lady, she found this lifestyle to be stifling. However she was a dutiful wife and did everything in her power to fulfill her obligations as the president’s wife properly.
She was very kind and benevolent towards the Revolutionary War veterans and used to provide financial support to those in need.
Continue Reading Below
Being the first First Lady, she had no role model to look up to within her own country. She looked to Europe for inspiration in hosting public functions and affairs; the Europeans also respected her in return and even sent her gifts.
The president’s second term was up in 1797 and the Washingtons went to Mount Vernon for their retired life. They remained a popular couple even after retirement and were often visited by several individuals holding high office. She continued to entertain guests even after her husband had died. 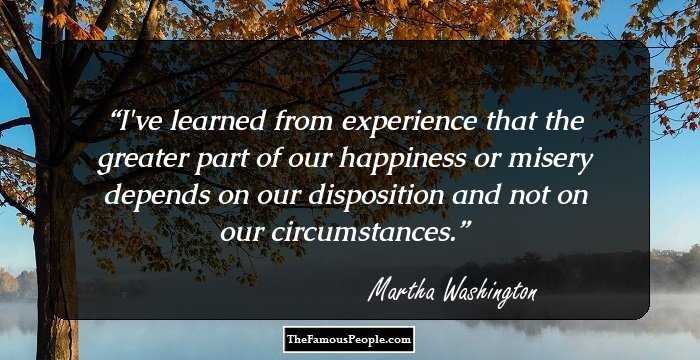 Quotes: Experience, Happiness
Major Works
She was the first First Lady of the United States and was noted for her patience, hard work, and loyalty towards her husband and country. As the wife of the very first president of the United States she set a precedent for other First Ladies to follow in future.
Personal Life & Legacy
She married a rich planter, Daniel Parke Custis in 1750 when she was just 18 years old. Her husband was two decades older. The couple had four children of whom only two survived childhood. Custis died in 1757.
Her second marriage was to George Washington in 1759. The couple did not have any children of their own but they raised her children from her previous marriage.
As a mother she was very unlucky as all the four of her children predeceased her. Her son John was the only one of her children who married and had issues. After her son’s death she became her grandchildren’s guardian.
Her marriage to George Washington was one based on mutual affection and care. She was a strong and independent woman who was also a dutiful wife.
She died at the age of 70 in her home in 1802. 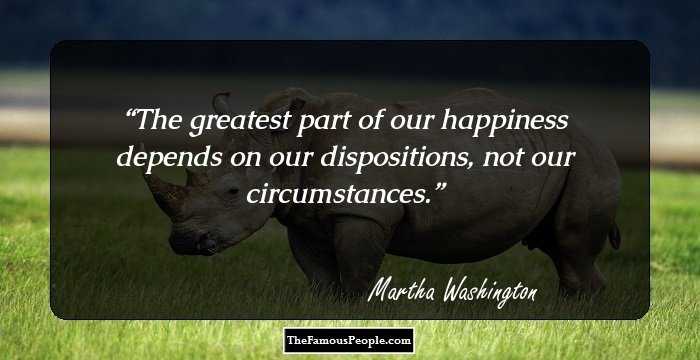 Quotes: Happiness
Trivia
The Martha Washington coin was released under the First Spouse Program in the U.S. in 2007.
You May Like

See the events in life of Martha Washington in Chronological Order