Mark Ruffalo is an American actor, director, and environmental activist. He is best known for portraying the character of the Hulk in movies like ‘The Avengers’ (2012), ‘Avengers: Age of Ultron’ (2015), ‘Thor: Ragnarok’ (2017), ‘Avengers: Infinity War’ (2018), and ‘Avengers: Endgame’ (2019). From a young age, he was determined to enter show business and attended the ‘Stella Adler Studio of Acting’ to hone his talent. Equipped with a degree from the drama school, he co-founded the ‘Orpheus Theatre Company’ and shouldered multiple responsibilities of being an actor, writer, director, producer, and light boy. As luck would have it, a meeting with playwright Kenneth Lonergan altered his fortune. His versatility as an actor landed him roles in Lonergan’s play ‘This is Our Youth’ (1996) and later in his famous movie ‘You Can Count on Me’ (2000). His performance won him praises from all corners and helped him establish a strong foothold in Hollywood. He went on to star in several notable movies like ‘Collateral’ (2004) and ‘Shutter Island’ (2010). Over the years, he excelled in his art and his performances in ‘The Kids Are All Right’ (2010), ‘Foxcatcher’ (2014), and ‘Spotlight’ (2015) earned him ‘Academy Award’ nominations. His portrayal of the Hulk earned him international fame. A politically vocal person, he is also an activist and supports a number of causes like anti-fracking, renewable energies, pro-choice movement, and LGBTQ rights. American People
T V & Movie Producers
American Men
Wisconsin Actors
American Actors
Childhood & Early Life
Mark Ruffalo was born on November 22, 1967, in Kenosha, Wisconsin, to Marie Rose, a hairdresser and stylist, and Frank Lawrence Ruffalo, Jr., a construction painter. He has two sisters, Tania and Nicole, and had a brother named Scott, who is no more. He is of mixed ethnicity as his father is of Italian origin, while his mother is of French, Canadian, and Italian descent.
He was brought up a Catholic and attended both Catholic and Progressive schools in his childhood.
Although he suffered from undiagnosed dyslexia and attention deficit hyperactivity disorder in his growing years, he recalled himself being a “happy kid” growing up in a "very big" family with "lots of love."
He spent his teen years in Virginia Beach with his family. While in Wisconsin and Virginia, he competed in wrestling matches in junior high and high school.
After graduating from ‘First Colonial High School,’ he moved with his family to San Diego, California. The family later migrated and settled in Los Angeles.
In Los Angeles, he took classes at the ‘Stella Adler Conservatory.’ He eventually co-founded the ‘Orpheus Theatre Company,’ wherein he took up various roles like acting, writing, directing, and producing. 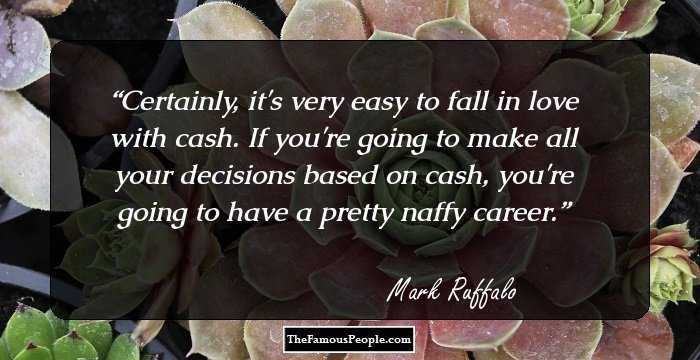 Continue Reading Below
Career
While acting in the ‘Orpheus Theatre,’ Mark Ruffalo landed small roles on TV and in films like ‘The Dentist’ (1996), ‘Safe Men’ (1998) and ‘Ride with the Devil’ (1999).
Soon, a meeting and collaboration with playwright Kenneth Lonergan altered his fortune. He acted in several of his plays, including ‘This is Our Youth’ (1996), which landed him the role of the male lead in Lonergan's movie ‘You Can Count on Me’ (2000). His performance in the film received critical acclaim and won him several awards.
The success of the film also helped him establish a strong foothold in Hollywood. He played prominent characters in subsequent movies like ‘The Last Castle’ (2001), ‘XX/XY’ (2002), and ‘Windtalkers’ (2002).
In 2002, he was diagnosed with a brain tumor. Though the tumor was benign, the surgery resulted in partial facial paralysis. Fortunately, he recovered fully after a brief spell of illness.
In 2003, he returned to work with leading roles opposite two famous actresses, Meg Ryan and Gwyneth Paltrow in ‘In the Cut’ (2003) and ‘View from the Top’ (2003), respectively. However, both the films failed at the box-office.
In 2004, he acted in four films: ‘We Don't Live Here Anymore,’ ‘Eternal Sunshine of the Spotless Mind,’ ‘13 Going on 30,’ and ‘Collateral.’ These films collectively displayed his skill in different genres.
After 2004, he consistently appeared in famous Hollywood productions as well as independent films. Films, such as ‘Just like Heaven’ (2005), ‘All the King's Men’ (2006), ‘Zodiac’ (2007), ‘Reservation Road’ (2007), and ‘The Brothers Bloom’ (2008) established him as a popular actor.
In 2006, he acted in Clifford Odets' play ‘Awake and Sing!’ at ‘Belasco Theatre,’ New York. He was nominated for the ‘Tony Award - Best Featured Actor in a Play’ for his performance.
In 2008, his film ‘What Doesn't Kill You’ was shown at the famous ‘Toronto Film Festival.’
Continue Reading Below
In 2010, he made his directorial debut with the film ‘Sympathy for Delicious.’ The film premiered at the ‘Sundance Film Festival’ and won the ‘Special Jury Award.’
The same year, he starred in the domestic comedy ‘The Kids Are All Right,’ which earned him, among other nominations, his first ‘Academy Award’ nomination and ‘BAFTA’ nomination for ‘Best Supporting Actor.’
In 2012, he acted in ‘The Avengers’ as Dr. Bruce Banner a.k.a. the Hulk and received critics’ appreciation for his performance. He reprised the character in ‘Iron Man 3’ (2013), ‘Avengers: Age of Ultron’ (2015), ‘Thor: Ragnarok’ (2017), ‘Avengers: Infinity War’ (2018), and ‘Avengers: Endgame’ (2019).
Meanwhile, he also appeared in the heist thriller ‘Now You See Me’ (2013), the comedy ‘Thanks for Sharing’ (2013), and the musical drama ‘Begin Again’ (2013).
In 2014, he starred as a lead in the television adaptation of the famous Broadway play, ‘The Normal Heart.’ His performance earned him an ‘Emmy’ nomination. Later that year, he starred in the film ‘Foxcatcher’ which earned him ‘Golden Globe’ and ‘Academy Award’ nominations. The same year, he also appeared as a father of two kids in the comedy ‘Infinitely Polar Bear’ which earned him a ‘Golden Globe’ nomination for the ‘Best Performance by an actor in a Motion Picture.’
In 2015, Mark portrayed the character of a famous journalist in the biographical drama ‘Spotlight,’ for which he received his third ‘Academy Award’ nomination and also a ‘BAFTA Award’ nomination.
2016 saw Ruffalo reprising his role as Agent Dylan Rhodes in ‘Now You See Me 2.’ The movie was a huge box-office success and earned critical acclaim for his performance as the leader of the Horseman team. 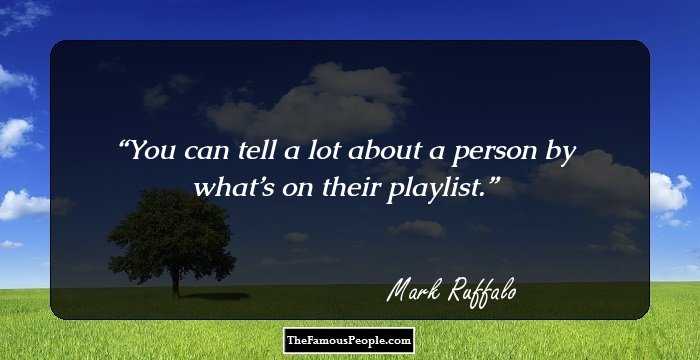 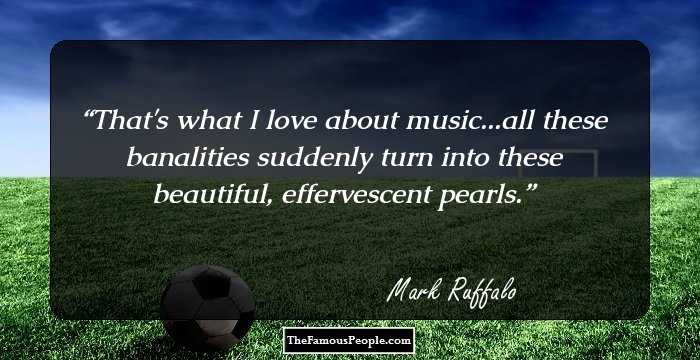 Quotes: Beautiful
Personal Life & Legacy
Mark Ruffalo married Sunrise Coigney in June 2000 and the couple has three children; a son named Keen and two daughters named Bella Noche and Odette.
Humanitarian Work
Mark Ruffalo is well-known as an anti-fracking activist in the state of New York.
He founded the ‘Solutions Project’ which works towards achieving 100% renewable energy.
He also supports the group ‘Water Defence’ which undertakes clean water programs.
He is also a staunch supporter of LGBTQ+ rights and supports the pro-choice movements.
Trivia
He worked as a bartender for almost nine years before breaking into show business.
All the original cast members of the ‘Avengers’ have got matching tattoos except Mark because he is afraid of needles.

Quotes By Mark Ruffalo | Quote Of The Day | Top 100 Quotes

See the events in life of Mark Ruffalo in Chronological Order