John Wayne was an American actor and director who went on to become one of the greatest stars in Hollywood. Wayne, whose career lasted several decades, did not set out to be an actor, but it was a set of circumstances that saw him starting off as an extra in movies. Subsequently, he went on to become one of the biggest stars who specialized in typical Westerns. Initially, John Wayne struggled a lot as he had to play minor roles, but it all changed when he appeared in the film ‘Stagecoach.’ Over the years, he appeared in classic films, such as John Ford’s ‘Cavalry Trilogy’ and the 1956 film ‘The Searchers.’ His portrayal of ‘Ethan Edwards’ in ‘The Searchers’ is regarded by movie connoisseurs as his greatest performance. John Wayne also wore the director’s hat and acted in a number of films during the ‘Second World War’ that were specially made to entertain the troops engaged in the war. John Wayne left behind a body of work that will forever be treasured by film lovers of all ages.

Will Smith
Actors #29
Directors #402
Film & Theater Personalities #63
DID WE MISS SOMEONE?
CLICK HERE AND TELL US
WE'LL MAKE SURE
THEY'RE HERE A.S.A.P
Quick Facts

epitaphs: Tomorrow is the most important thing in life. Comes into us at midnight very clean. It's perfect when it arrives and it puts itself in our hands. It hopes we've learned something from yesterday.

American Celebrities
Directors
American Men
Iowa Actors
University Of Southern California
Childhood & Early Life
John Wayne was born Marion Robert Morrison on 26 May 1907, in Winterset, Iowa, USA, to Clyde Leonard Morrison and Mary Alberta Brown. His father was a pharmacist, while his grandfather Marion Mitchell Morrison was a veteran of the ‘American Civil War.’ Wayne was of English, Scottish, and Irish origin.
The family moved around during his childhood and finally settled down in Glendale, California. John Wayne studied at the ‘Wilson Middle School,’ located in Glendale, and was involved with the ‘Order of DeMolay,’ a fraternal organization for young men. Later on, he studied at the ‘Glendale High School’ and also played football for his school team.
He wanted to serve the ‘US Navy’ but was rejected by the ‘US Naval Academy.’ He then took up a sporting scholarship to the ‘University of Southern California’ in 1925. However, an injury forced him out of sports altogether and he had to quit the university after his scholarship funds were pulled.
After leaving the ‘University of South California,’ his coach Howard Jones got him the job of an extra with the help of actor Tom Mix. Wayne then acted in a number of films as an extra. 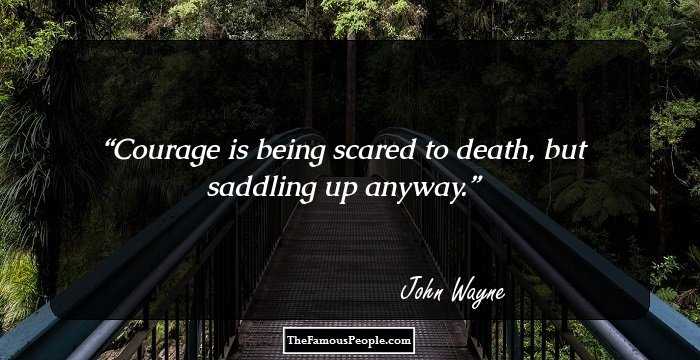 The Hottest Male Celebrities With The Best Abs
Career
It was in 1930 that John Wayne started playing major roles. It all started when Raoul Walsh cast him in the big budget film ‘The Big Trial.’ Subsequently, he assumed his stage name that became famous all over the world. The film failed commercially and Wayne was once again forced to take up minor roles.
After a period of struggle, in which he appeared in minor roles in films and television shows, John Wayne got his first big break in the film ‘Stagecoach’ which released in 1939. Following the critical appreciation and commercial success of ‘Stagecoach,’ John Wayne finally started hogging the limelight. The following year, he appeared in ‘The Long Voyage Home’ that further cemented his place as an A-lister.
When the ‘Second World War’ broke out, John Wayne wanted to serve in the war. When he was not selected, he spent his time touring several places in order to entertain American soldiers. Some of the films from that period include ‘Flying Tigers,’ ‘Back to Bataan,’ and ‘Flame of the Barbary Coast.’ Many of those films were specifically meant to portray the valor of soldiers.
It was in 1948 that John Wayne teamed up with John Ford for the first of his ‘Cavalry Trilogy,’ ‘Fort Apache.’ It was followed by ‘She Wore a Yellow Ribbon’ the following year and ‘Rio Grande’ the next year which marked the completion of the trilogy. He then started working with Howard Hawk who directed the film ‘Red River’ which is regarded as a classic of the Western genre.
The actor-director duo of John Wayne and John Ford continued for many films since most of their films were successes. In 1956, John Wayne acted in ‘The Searchers,’ which is considered by many as his best performance.
In 1960, John Wayne acted and directed the movie ‘The Alamo.’ After a few years, he appeared in war films, such as ‘The Longest Day’ and ‘In Harm’s Way,’ both of which turned out to be box office hits.
In 1969, John Wayne starred in the film ‘True Grit,’ and his performance as a US Marshall was widely appreciated, leading to his only ‘Academy Award’ for ‘Best Actor.’ Seven years later, John Wayne appeared in the last film of his illustrious career ‘The Shootist’ where he played ‘John Bernard Books.’ 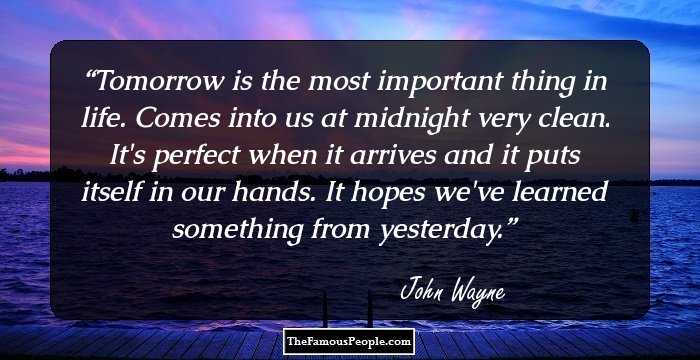 Quotes: Life
Awards & Achievements
He won the ‘Academy Award’ for ‘Best Actor’ for his 1969 film ‘True Grit.’
Continue Reading Below
In 2006, ‘Premier’ magazine ran an opinion poll for the greatest roles ever played in Hollywood and John Wayne’s role of ‘Ethan Edwards’ in ‘The Searchers’ was ranked 87th.
Personal Life & Legacy
John Wayne got married to Josephine Alicia Saenz in the year 1933, but the marriage ended in divorce in 1945. They had four children – Michael, Mary Antonia, Patrick, and Melinda.
He married Esperanza Baur, a Mexican actor, in 1946, but the marriage wasn’t a happy one. Wayne and Baur got divorced in 1954.
Wayne married Pilar Pallete, a Peruvian actress, in 1954, but the couple got separated 19 years after their wedding. They had three children – Aissa, John Ethan, and Marisa.
After his separation from Pilar, he got romantically involved and lived with his former secretary Pat Stacy until his death in 1979.
John Wayne was a supporter of the ‘Republican Party’ and held deep-rooted anti-communist views.
On 11 June 1979, he died of stomach cancer at the ‘UCLA Medical Center.’ His body was buried in the ‘Pacific View Memorial Park Cemetery’ in Corona del Mar, Newport Beach. 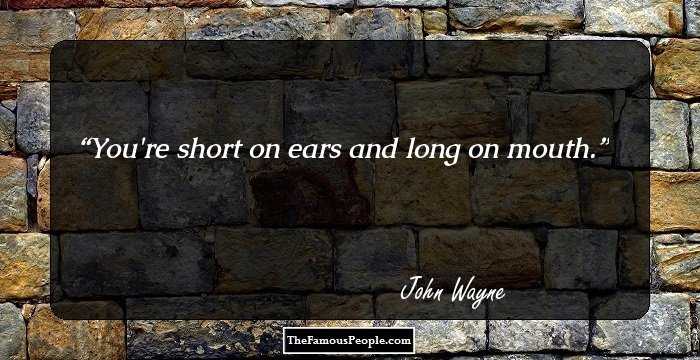 See the events in life of John Wayne in Chronological Order