Malena Ernman is renowned Swedish singer, primarily known for her opera singing (mezzo-soprano). Born as Sara Magdalena Ernman, she began singing from an early age and became a member of the Coromanterna Choir from the age of six. Later, she moved to France to study music, where from the age of 15, she began to give solo performances in jazz, eventually returning to Sweden to continue her music education. Concurrently, she began participating in music festivals and radio choirs. She began her professional opera career at the age of 27 with ‘Liten Karin’, appearing in it as Princess Cecilia. At the age of 30, she had her international breakthrough, appearing as Nerone in ‘Agrippina’, first in Brussels and then in Paris. Thereafter, she continued to work both at home and abroad, appearing in renowned operas, until she was convinced by her elder daughter, Greta Thunberg, to give up air travel because its emission is harmful to the environment. 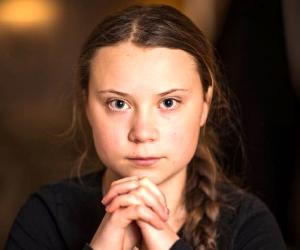 Birgit Nilsson
Opera Singers #45
Singers #2304
DID WE MISS SOMEONE?
CLICK HERE AND TELL US
WE'LL MAKE SURE
THEY'RE HERE A.S.A.P
Quick Facts

Swedish People
Women Singers
Scorpio Singers
Swedish Singers
Female Opera Singers
Childhood & Early Life
Malena Ernman was born on 4 November 1970 in Uppsala, Sweden. Her father, Lars Ernman, was a Civilekonom (literally meaning civil economist), holding degrees in business administration and economics. Her mother, Eva Héléne Arvidsson, was a Diakon.
Educated at the Conservatoire de Musique in Orléans, France, she later studied at the University College of Opera in Stockholm, graduating from there in December 1997. She also holds a soloist diploma from the Royal College of Music in Stockholm.
Continue Reading Below
You May Like

The Best Black Actresses Of All Time
Early Exposure
Sometime in the middle of 1980s, while studying at the Conservatoire de Musique, Malena Ernman began her soloist singing career as a jazz singer in Orléans and Paris. She continued to give concerts on returning to Sweden. In 1994, she debuted on the Swedish Radio, singing some of Sergei Rachmaninoff’s composition.
In 1995, she sang Olov Olofsson’s ‘The Air Conditioned Nightmare’ at Contemporary Swedish Music Festival. In the same year, she took part in a recording of Symphony No. 2 "St. Florian" with Royal Stockholm Philharmonic under the baton of Leif Segerstam.
Career
In 1997, Malena Ernman began her career as an opera singer, appearing as Princess Cecilia in Ivar Hallström’s ‘Liten Karin’. She quickly drew the attention of the media for her expressive presentation.
In 1998, she appeared as Rosina in ’Il barbiere di Siviglia’ and as Kaja in ‘Staden under Leif Segerstam’, both held at the Royal Opera in Stockholm. In both the cases, she received great critical acclaim for her rich voice and impressive techniques.
In July 1999, she appeared in a trouser role, performing as Ziöberg in the premiere of Jonas Forssell's ‘Trädgården’ at the Drottningholm Palace Theatre in Stockholm. It was the first new opera to be premiered at that theatre in recent times.
In 2000, she had her international breakthrough when she appeared as Nerone in ‘Agrippina’, conducted by René Jacobs, at La Monnaie in Brussels and Théâtre des Champs-Élysées in Paris. Also, in the same year, she had her first album, ‘Naïve’, released.
From 2000 onwards, she began performing both at home and abroad, singing Sesto in Handel’s ‘Giulio Cesare’ at the Drottningholm Festival (Sweden) in 2001. In 2002, she appeared as Nancy in the chamber opera, ‘Albert Herring’, at the Glyndebourne Festival, held in East Sussex, England.
In 2003, she sang Prince Orlovsky in Johann Strauss's operetta, ‘Die Fledermaus’, which was performed and broadcast at the BBC Proms. Also in 2003-2004 session, she sang Donna Elvira in ‘Don Giovanni’ in Brussels and appeared as Lichas in the musical drama ‘Hercules’ at Aix-en-Provence Festival.
In 2003, she debuted in television films, appearing as Prince Orlofsky in ‘Die Fledermaus’. Also in the same year, she had two albums, ‘Songs in Season’ and ‘My Love’ released. In the following year, she appeared in the highly challenging concert, ‘No String Attached’ with Martin Fröst and Niklas Sivelöv.
Continue Reading Below
In March 2005, she appeared as Julie in the premier of Philippe Boesmans’s opera of the same name at La Monnaie, Brussels. Later she reprised the same role first at the Vienna Festival and then at Aix-en-Provence Festival.
In spring of 2006, she sang Dido’ in Henry Purcell’s opera, ‘Dido and Aeneas’, at the Vienna Festival and Nerone in ‘Agrippina’ at Oper Frankfurt. In summer, she debuted at Salzburg Festival, singing Annio in ‘La clemenza di Tito’ under conductor Nikolaus Harnoncourt.
In 2007, she appeared as Sesto in ‘Giulio Cesare’ (Vienna), as Cherubino in ‘Le nozze di Figaro’ (Aix-en-Provence) and as Nerone in ‘L'incoronazione di Poppea’ (Amsterdam). Thereafter, she continued to appear in various roles participating in operas like ‘La Cenerentola’ and ‘Dido and Aeneas’ in various cities.
In February 2009, she entered Melodifestivalen 2009, a Swedish song contest organized by Sveriges Television (SVT) and Sveriges Radio (SR), with the song ‘La Voix’, written by her friend Fredrik Kempe. On winning the contest, she entered Eurovision Song Contest 2009, held in Russia, finishing twenty-first in the final.
In 2010, she sang Idomeneo (Idomeneus), King of Crete, in ‘Idomeneo, re di Creta ossia Ilia e Idamante’ (in Brussels) and was highly praised for her spirited portrayal of a prince. In the following year, she was in Vienna, playing the title role in Handel’s ‘Serse’.
In 2012, she sang Eduige in ‘Rodelinda’ and Elena in ‘La donna del lago’; she was specially commended for her performance in ‘La donna del lago’. In the following year, she was cast as Béatrice in Hector Berlioz’s ‘Béatrice et Bénédict’.
Possibly in 2017, she decided to give up her international opera career. In this she was convinced by her daughter, Greta, that her travel abroad by airplane has negative impact on the environment.
Although she abandoned her international career, she continues to remain active at home. She sang Gabriella in ‘Så som i himmelen’ in September 2018. In August 2018, she published ‘Scenes from the Heart’ (Swedish: Scener ur hjärtat), an autobiographical book that she had co-written with her husband and daughters.
Family & Personal Life
In 2004, Malena Ernman married actor Svante Thunberg, currently working as her manager and producer. They have two daughters, Greta and Beata. While Greta (2003 born) has been diagnosed with Asperger syndrome, obsessive-compulsive disorder (OCD), and selective mutism, Beata is known to suffer from ADHD.
In spite of her deficiency and her young age, Greta Thunberg is now a renowned environmental activist, credited with raising global awareness about the negative impact of climate change. In May 2019, she published a collection of her speeches, entitled ‘No One Is Too Small to Make a Difference’.
You May Like

See the events in life of Malena Ernman in Chronological Order