(Italian Operatic Tenor Regarded as the 'King of the High Cs')

Advanced Search
Popularly known as ‘the King of the High Cs’, Luciano Pavarotti was a well-known operatic tenor. Blessed with a rare voice range, he left audiences across the globe spellbound and was one of the most commercially successful tenors. He established himself as one of the finest baritone singers of the twentieth century and was appreciated for the beauty and brilliance of his tone. The combination of accuracy of pitch and the natural range of voice was one of his best attributes, which earned him great commercial success. He also became popular for his televised concerts that attracted a large number of audience. To him goes the credit of increasing the popularity of opera world over and he is best known for his bel-operatic works such as ‘La boheme’, ‘Tosca’ and ‘Madama Butterfly’. He also spent time towards humanitarian efforts and worked for the amelioration of refugees. He was a part of the Red Cross Team and served at various other philanthropic organizations. He organised the world famous annual charity concert, ‘Pavarotti & Friends’ that raised millions of dollars for the charities he supported. He made many classical crossovers and pop recordings and also worked with the Irish rock band, ‘U2’. Jenny Lind
DID WE MISS SOMEONE?
CLICK HERE AND TELL US
WE'LL MAKE SURE
THEY'RE HERE A.S.A.P
Quick Facts

Italian Celebrities
Classical Singers
Italian Men
Libra Singers
Male Singers
Childhood & Early Life
Luciano Pavarotti’s father, Fernando Pavarotti was an amateur tenor but failed to make it big. Young Pavarotti developed an interest in music after he listened to his father’s recordings, which featured popular tenors like Bjoerling, Tito Schipa, and his favorite, Giuseppe Di Stefano.
He faced poverty in his childhood and lived in a rented single room apartment with his parents. He started singing with the local church choir at the age of nine and spent seven years training his vocals to become a successful tenor. 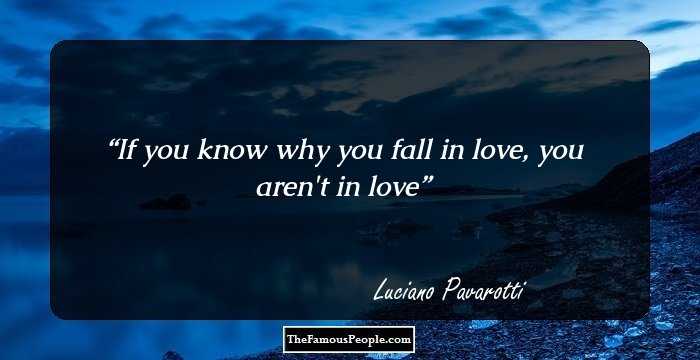 Quotes: You, Love
Continue Reading Below
Career
In 1954, Luciano studied music with Arrigo Pola, a professional tenor in Modena. In 1955, he participated in the International Eisteddfod in Llangollen, Wales, as a member of the Corale Rossini voice choir, where they won the first prize.
In 1961, he made his operatic debut as Rodolfo, in La Boheme at the Teatro Reggio Emilia. He made his international debut in 1963 as ‘Rodolfo’, for tenor Giuseppe Di Stefano at the Royal Opera House in London.
In 1965, he made his American debut in the Miami Production, ‘Lucia di Lammermoor’. The same year he formed a partnership with Australian soprano Joan Sutherland.
He performed "La Fille du Regiment" at the New York Metropolitan Opera in 1972. In 1977, he delivered his first live performance on television. This attracted a large number of television audience.
Pavarotti got more international fame in 1990 when the BBC made "Nessun Dorma" as the theme song of their TV coverage of the 1990 FIFA World Cup.
He gave a free performance in 1993, at the Great Lawn of New York’s Central Park. The concert attracted over one million people apart from the millions of viewers who watched the event on television from around the world.
In 1998, he became the first opera singer to perform on ‘Saturday Night Live’, performing alongside Vanessa L. Williams. In 2003, he released ‘Ti Adoro’, his first and only ‘crossover’ album. It was produced by Michele Centonze.
In 2006, he delivered his last major performance on ‘Nessun Dorma’, at the opening of the Winter Olympics in Italy. 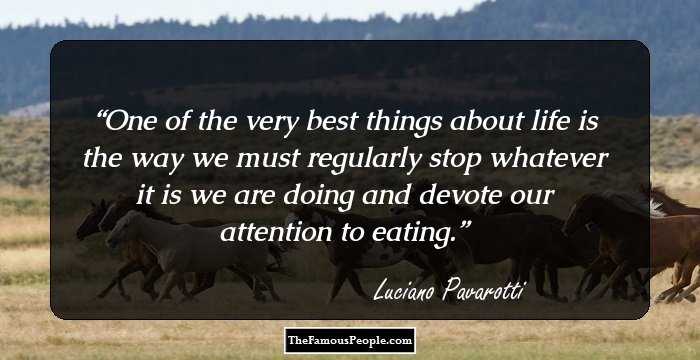 Quotes: Life
Continue Reading Below
Major Works
In 1990, he released the album, ‘The Essential Pavarotti’. It was the first ever classical album to reach the number one position in the UK Top Charts and remained there for an unprecedented five week period.
He established the world-famous annual charity concert, ‘Pavarotti & Friends’, which brought together artists from different parts of the music industry, including, Bryan Adams, Bon Jovi, Elton John and Spice Girls. These charity concerts have raised millions of dollars over the years, which he donated towards humanitarian efforts.
Awards & Achievements
In 1998, he was honoured with the Grammy Legend Award.
He holds two ‘Records’, one for receiving the most curtain calls and another for the best-selling classical album, ‘The Three Tenors’
In 1998, he was appointed as the United Nations Messenger of Peace.
In 2001, he was awarded the Nansen Medal from the UN High Commission for Refugees.
In 2006, he was conferred the honorary citizenship by the city of Sarajevo. 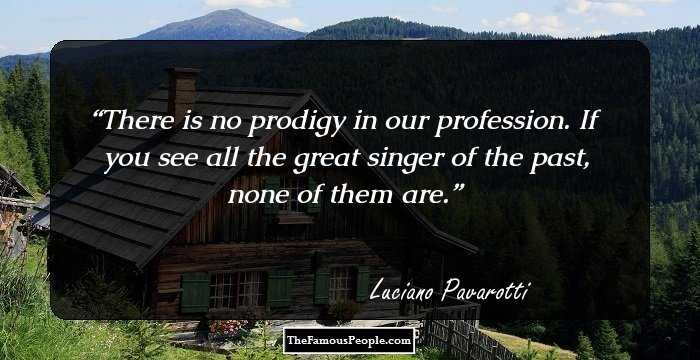 Quotes: You, Past
Personal Life & Legacy
He married Adua Veroni in 1961 and they had three children.
In 2003, he married his former personal assistant Nicoletta Mantovani. They had a child together.
He passed away due to pancreatic tumour. He is survived by four daughters and his ex-wife Adua.
Trivia
This popular tenor earned the title, ‘The King of Cancellations’ for frequently backing out of performances.

Quotes By Luciano Pavarotti | Quote Of The Day | Top 100 Quotes

See the events in life of Luciano Pavarotti in Chronological Order