(One of the Most Successful Child Actors of the 1990s)

Performing in stage productions and acting since his infant years, Macaulay Culkin stood out as the intelligent, amiable child in ‘Rocket Gibraltar’, ‘Uncle Buck’ and the successful ‘Home Alone’ films. Although he enjoyed widespread acclaim and success as a boy, his career as an adult was not that fruitful. He puttered with a variety of lucrative, hollow projects, which effectively put him out of showbiz. Consequently, he never really recaptured the same success that he did as a child. This child prodigy earned the respect of pop-star Michael Jackson, who went on to become his close friend and confidante. After a brief period of idleness, he re-entered the world of entertainment once again with ‘Party Monster’ and ‘Saved’ but both failed to leave his footprints in the world of entertainment. There have, however, been a number of personal snares in his life, including his arrest for the possession of controlled substance and being at the epicenter of Jackson’s scandalous molestation trial. Career and scandals apart, he has been romantically linked with actresses Rachel Miner and superstar, Mila Kunis. American People
Musicians
American Men
New Yorkers Actors
New Yorkers Musicians
Childhood & Early Life
Macaulay Culkin was the third of the seven children born to Christopher Cornelius ‘Kit’ Culkin and Bonnie Bedelia in Manhattan. He was raised a Roman Catholic and studied in a number of schools including Catholic school, Professional Children’s School and School of American Ballet.
Culkin started acting from the age of four and began appearing in a number of stage productions such as ‘Bach Babies’. He continued to appear in stage roles, commercials and films through the 1980s and realized that this is what he wanted to do for the rest of his life. 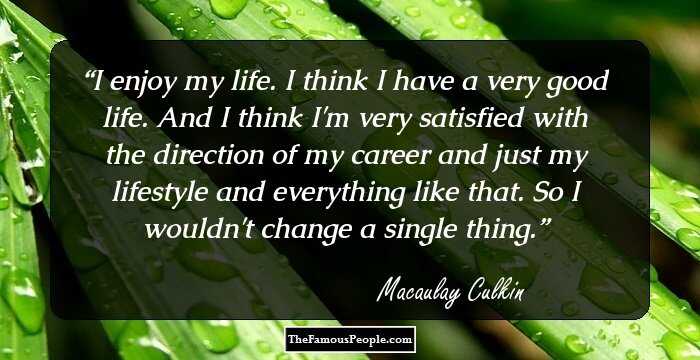 Continue Reading Below
Career
He soon began appearing in the action series, ‘The Equalizer’ and in the TV Movie, ‘Midnight Hour’. In 1989, he starred in ‘Uncle Buck’, his first major blockbuster film, which made him Hollywood’s beloved child.
His stardom rose by colossal proportions in 1990, when he starred in the wildly successful burlesque comedy, ‘Home Alone’. The following year, he melted the hearts of fans and critics with his lovable performance as the best friend of a troubled young girl in the tear-jerker, ‘My Girl’.
In 1992, he was cast in the sequel, ‘Home Alone 2: Lost in New York, which turned out to be a little less successful in comparison to the first installment of the ‘Home Alone’ series. He also starred in ‘The Good Son’ in 1993
Tasting success at a very young age meant his proud parents pushed him even harder and urged him to sign more films without even thinking about it twice. His father, in particular, who was also his manager, egged him on to sign the 1994 film adaptation of a classic, ‘Richie Rich’, in which his performance was rated as ‘forgettable’.
Towards the late 1990s, rumors began to surface that the Culkins began a greedy custody battle over Macaulay’s wealth and the battle eventually worked to the advantage of his mother.
After years of inactivity, he returned to acting, with the play ‘Madame Melville’, which was staged in London’s West End. In 2003, he made a guest-appearance on the NBC sitcom, ‘Will and Grace’ and starred in ‘Party Monster’, the story of the promoter of a club.
In 2004, he was seen in ‘Saved, which received average reviews at the box-office. He, nonetheless, earned rave critical reviews as an adult actor. With this success, he accepted voice-over projects and made appearances in offbeat films like Seth Green’s, ‘Robot Chicken’.
In 2006, he published a semi-autobiographical novel, ‘Junior’ which featured details about his stardom and his overwrought relationship with his father.
In 2007, he appeared in ‘Sex and Breakfast’, a dark comedy about a couple who begin to engage themselves in group sex at the recommendation of their therapist. The film received unenthusiastic reviews at the box office.
Continue Reading Below
In 2009, he appeared in the Aviva Insurance commercial and made a brief cameo in WWE Raw. More recently, he has appeared on YouTube showing how he turned his apartment in New York into a painting workshop. 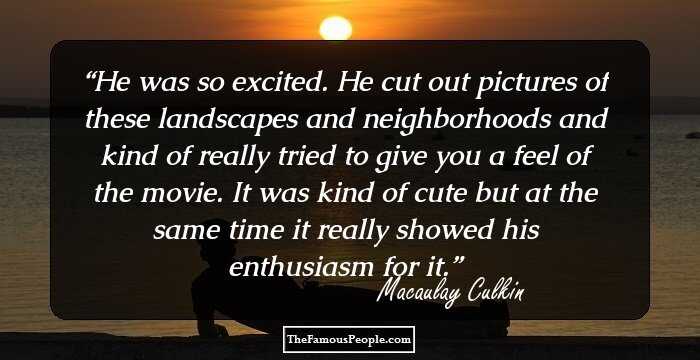 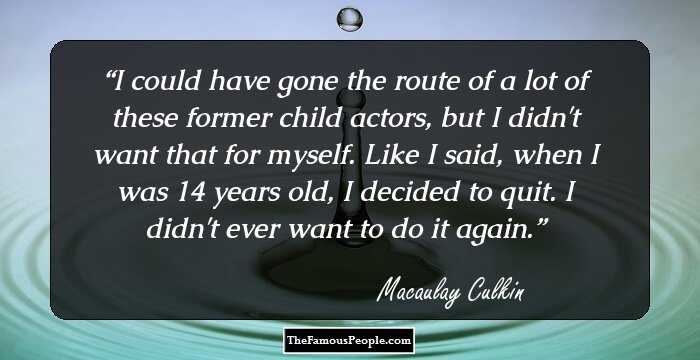 Quotes: Children
Personal Life & Legacy
He married actress Rachel Miner in 1998, but the couple divorced in 2002. The same year he began dating actress, Mila Kunis and split with her in 2011.
In 2004, he was arrested for the possession of marijuana and other controlled substances in Oklahoma City.
He was close to Michael Jackson and even appeared in Jackson’s ‘Black or White’ video. He was seen at Jackson’s burial in 2009.
Trivia
This Hollywood actor, who shot to fame with the ‘Home Alone’ series, starred in the experimental movie, ‘The Wrong Ferrari’, which was shot entirely on the iPhone.

Quotes By Macaulay Culkin | Quote Of The Day | Top 100 Quotes

See the events in life of Macaulay Culkin in Chronological Order