Advanced Search
Talk about Chinese acting and singing sensations and you would have Lu Han feature at the top of the list. One of the most recognized faces of the Chinese entertainment industry, Han has found fame, admiration and appreciation not just in China but globally. His acting and singing credentials can be determined from the fact that he is cited as the most popular entertainment star from Mainland China. Han has a lot of firsts to his credit—he was the first actor from post-90s generation who has a wax statue in Madame Tussaud's Wax Museum in Beijing, the first male star from post-90s generation who graced the cover of several high-end popular magazines like Forbes China, People, GQ Style, Southern Metropolis Weekly, ELLE Journal, Cosmopolitan and Harper's Bazaar Journal. He set the Guinness World Record related to Chinese Social Media becoming the first Chinese star whose one single posting received the most comments on Sina Weibo and millions of ‘like’ on Instagram. In 2016, Han was featured on Business of Fashion's ‘BOF 100’ rankings, becoming the only Chinese celebrity to make it onto the ranking and was given the title ‘Most Anticipated Chinese Star’. He also became the first celebrity born after the 1990s to be named the ‘Artist of the Year’ by China Newsweek. And if this weren’t enough, did you know that Han is the first singer from mainland China whose album was verified platinum by the IFPI. Mary J. Blige
DID WE MISS SOMEONE?
CLICK HERE AND TELL US
WE'LL MAKE SURE
THEY'RE HERE A.S.A.P
Quick Facts

See the events in life of Lu Han in Chronological Order 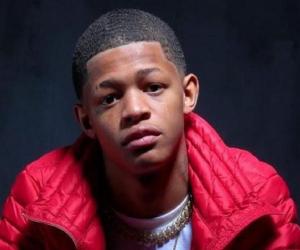