Joss Stone is an English soul singer-songwriter and actress. She grew up listening to a wide variety of music including American R&B and soul music performed by such artists as Dusty Springfield and Aretha Franklin. As a result, she developed a soulful style of singing, like her idols, possessing the vocal range of a contralto. She emerged to fame with her multi-platinum debut album, The Soul Sessions, which catapulted her in the Top 5 on the U.K. Albums chart as well as the Top 40 of the U.S. Billboard 200 chart. Her second album, the equally multi-platinum, Mind Body & Soul, topped the U.K. Albums chart for one week, and spawned the Top 10 hit, You Had Me. Her third album, Introducing Joss Stone, achieved gold record status by the RIAA. Her fourth album, Color Me Free!, reached the Top 10 on the Billboard 200 chart. Stone partnered with Surfdog Records to release, LP1, on Stone’d Records. She made her film acting debut with the fantasy adventure film, Eragon, and made her television debut portraying Anne of Cleves in the Showtime series, The Tudors. Throughout her career, Stone has sold 14 million albums worldwide. She has earned numerous awards and accolades, including two BRIT Awards and a Grammy Award.
Continue Reading Below British People
Lyricists & Songwriters
Rhythm & Blues Singers
British Women
Aries Singers
Childhood & Early Life
Stone was born Jocelyn Eve Stoker on April 11, 1987 at Buckland Hospital in Dover, Kent, England, to Wendy and Richard Stoker, who owns a fruit and nut import/export business as the third of four children.
She attended Uffculme Comprehensive School in Uffculme, Devon, where she made her first public appearance, and left school at age sixteen with only three GCSE qualifications because she was dyslexic.
She grew up listening to a wide variety of music including American R&B and soul music performed by such artists as Dusty Springfield and Aretha Franklin, and she developed a soulful style of singing. 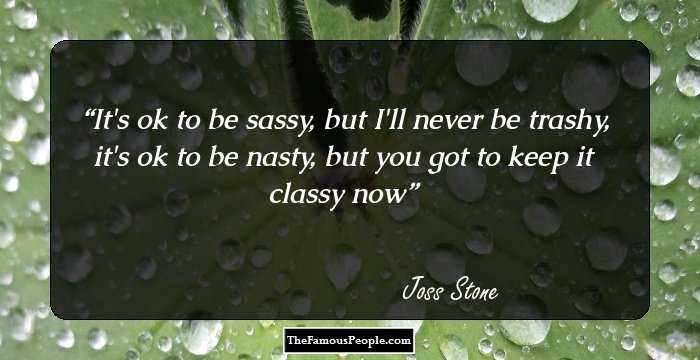 Who Is The Most Popular BTS Member?
Career/Later Life
At thirteen, Stone auditioned for the BBC Television talent show, Star for a Night in London. She sang Donna Summer’s, On the Radio, for the broadcast, and eventually won the contest.
The London-based producers Andy Dean and Ben Wolfe of the Boilerhouse Boys, her heard her at a charity show, and recommended her to S-Curve Records founder and CEO, Steve Greenberg in December 2001.
She was flown to New York, and in the audition sang classic soul songs of Otis Redding, Gladys Knight and Aretha Franklin’s, and was instantly signed by Greenberg to his label in 2002.
Her debut album, The Soul Sessions, released in 2003, was produced by Steve Greenberg, Mike Mangini and Betty Wright, and consists of little-known soul tracks by Aretha Franklin, Laura Lee, Bettye Swann and others.
Her second album, Mind Body & Soul, was released in 2004. Its singles such as, You Had Me, Right to Be Wrong, Spoiled, and Don’t Cha Wanna Ride, became huge hits.
She joined Band Aid 20 in 2004 in benefit of Sudan’s troubled Darfur region, and with luminaries as Chris Martin and Bono, re-recorded the song, Do They Know It’s Christmas?.
In March 2005, she was named the spokesperson for the Gap clothing company, replacing the actress Sarah Jessica Parker. She has appeared in many commercials for that store since then.
She performed a medley of “It’s a Man’s World” and “Papa’s Got a Brand New Bag” with funk legend James Brown on BBC One’s chat show, Friday Night with Jonathan Ross in July 2005.
Stone collaborated with jazz pianist Herbie Hancock and blues singer-guitarist Jonny Lang on a cover of U2’s song, When Love Comes to Town, for Hancock’s 2005 album, Possibilities.
Continue Reading Below
She joined Stevie Wonder and others during the Super Bowl XL pre-game ceremonies to perform a medley of Wonder’s hits, and on the night of the 2006 Grammy Awards, she helped perform a medley.
She made her film debut in 2006, in the fantasy adventure film, Eragon, based on Christopher Paolini’s novel of the same name, directed by Stefen Fangmeier, playing the fortune teller Angela.
Her third studio album, Introducing Joss Stone, released in 2007, debuted and peaked at number twelve on the UK Albums Chart, but could not match the success of Stone’s two previous albums.
Stone’s fourth studio album entitled Color Me Free!, was released in 2009. She left EMI over differences regarding the cover picture of the album, and formed her own independent record label, Stone’d Records
In 2010, her voice was used for the Bond girl, in the video game, James Bond 007: Blood Stone, and she also performed and co-wrote with Dave Stewart the game’s theme song.
She made her television debut portraying Henry VIII’s fourth wife Anne of Cleves in the third season of The Tudors. She reprised the role in the show’s final season in 2010.
The Soul Sessions Vol. 2, the sixth studio album by the artist was released in 2012. It consists of eleven cover versions of soul songs, and is a follow-up of her debut album.
Major Works
Stone’s debut album, The Soul Sessions, reached the top five on the UK Albums Chart and eventually went triple platinum by the British Phonographic Industry and gold by the Recording Industry Association of America.
Her 2004 album, Mind Body & Soul, debuted at number one in Britain making her the youngest female to top the UK Albums Chart, and the album was certified triple platinum by the BPI.
Stone’s album, Joss Stone, earned for her the HUMO’s Pop Poll de Luxe Award for Best International Female Singer, and two Brit Awards in the British Female Solo Artist and British Urban Act categories.
Awards & Achievements
At the 49th Grammy Awards, she shared the Best R&B Performance by a Duo or Group with Vocals Award for the single, Family Affair, with John Legend and Van Hunt.
Personal Life & Legacy
In 2004, Stone dated Beau Dozier, with whom she co-wrote the song “Spoiled”. Dozier is the son of Motown producer Lamont Dozier, but the two split up in November of the following year.
In 2011, police arrested two men near her home, for plotting to rob and murder her. After a trial at Exeter Crown Court, they were found guilty and convicted.
Trivia
Once ranked 7th in Maxim Magazine’s poll of Sexiest Vegetarians, she has posed with a chicken in a new PETA’s online advertisement promoting vegetarianism.
This singer always enjoyed listening to Aretha Franklin’s songs, which inspired her to pursue a musical career, and she began to be described as “White Aretha Franklin.”

See the events in life of Joss Stone in Chronological Order