Advanced Search
Lionel Richie’s honeyed tones have festooned the radiofrequencies of millions of soul and R&B music stations around the globe. His famous songs, ‘Hello’, ‘Truly’, ‘Three Times A Lady’ and ‘Say You, Say Me’ have been conferred with the ‘evergreen’ status and have promoted him to celebrity status. He initially forged a successful career with the ‘Commodores’ and then went on to have a successful solo career. A Grammy Award-recipient, Richie is considered one of the most successful singer-songwriters of the 20th century, with most of his songs peaking on important music charts. After a long and successful spell with the ‘Commodores’, he began writing and producing country hits and ended up becoming one of the most popular artists of his time. This singer-songwriter, record producer and actor has sold nearly 100 million records worldwide and is single-handedly known for his solo-career success, not banking on the earlier success he had with the ‘Commodores’. In his music career, he has collaborated with a number of musicians and singers including Diana Ross, Enrique Iglesias, Rascal Flatts and Kenny Chesney. Apart from his career in the music industry, he has also appeared in films such as ‘Pariah’ and the documentary series, ‘Who Do You Think You Are?’. American People
Pop Singers
Black Singers
Black Musicians
Black Pop Singers
Childhood & Early Life
Lionel Brockman Richie, Jr. was born to Alberta R. (Foster) and Lionel Brockman Richie in Tuskegee, Alabama.
He studied at Joliet Township High school and was a very good tennis player during school. He was then offered a tennis scholarship to study at the Tuskegee Institute, which he accepted. He majored in Economics and graduated from the university.
When he was a student with the university, he took interest in a number of upcoming R&B groups in the 1960s. Post completing his graduation degree, he attended Auburn University for a brief period of time. 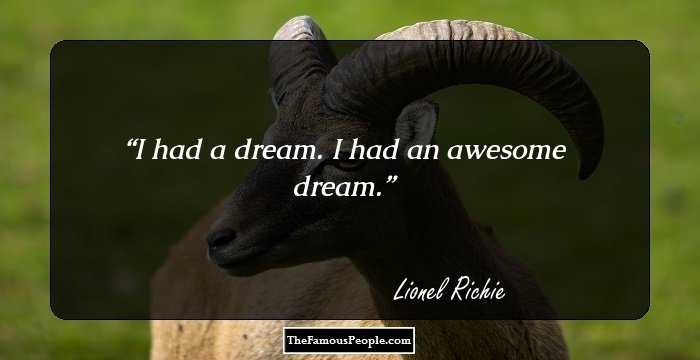 Quotes: I
Continue Reading Below
Career
In 1968, he was signed on as a singer and saxophonist with the ‘Commodores’. The same year, he signed a record contract with Atlantic Records for one record and then moved on to Motown Records.
In 1974, the band ‘Commodores’ released their debut studio album, ‘Machine Gun’, which was an album of funk music. Three years later, they released the self-titled album, ‘Commodores’, which became extremely popular and is listed as one of their top 5 albums till date.
He sang the theme song for the film, ‘Endless Love’ along with Diana Ross in 1981. The song went on to become a huge hit in the UK, Brazil, Australia, New Zealand and Japan. It is also considered one of Motown Records’ greatest hits.
He began his solo career in 1982 with a self-titled album. One of the singles from the album, ‘Truly’ peaked at the no. 1 position on the music charts in the US.
He released his next solo venture, ‘Can’t Slow Down’ in 1983, under the label of Motown Records. The album sold twice as much over his first album and also went on to win a couple of Grammy Awards.
The next year, Lionel Richie was seen performing ‘All Night Long’, one of his greatest singles at the closing ceremony of the Olympics Games in Los Angeles.
Through 1984, he had a string of hit singles including, ‘Stuck on You’, ‘Running with the Night’, ‘Penny Lover’ and ‘Hello’. The next year, he wrote and performed a song titled ‘Say You, Say Me’ for the film, ‘White Nights’, for which he won an Academy Award.
In 1985, he collaborated with superstar Michael Jackson for the charity single hit, ‘We Are the World’. The next year, he released one of his most successful albums yet, ‘Dancing on the Ceiling’, which produced a range of hits including ‘Ballerina Girl’, ‘Se La’ and ‘Dancing on the Ceiling’.
He went on a hiatus for a few years only to return with his greatest-hits collection, ‘Back to Front’, in 1992. Four years later, he released his fourth studio album, ‘Louder Than Words’, which had disappointing sales.
Continue Reading Below
‘Time’, his fifth studio album, released in 1998, also failed to make it big and had very low sales compared to his previous ventures.
From 2002 to 2005, Richie’s song ‘Running with the Night’ was featured on the video game, ‘Grand Theft Auto: Vice City’. During this time, he was also seen in the British series, ‘Top Gear’ and on a ‘CMT Crossroads’ episode.
In 2006, he performed at the New Orleans Jazz & Heritage Festival and also released his studio album, ‘Coming Home’. The album went on to become one of the biggest hits of the decade. The same year, he hosted and performed in the series, ‘An Audience with Lionel Richie’.
From 2007 to 2009, he was seen on ‘Australian Idol’, performed at the Times Square for the New Year’s Eve celebration and he also went on to release the album, ‘Just Go’. In 2009, he was seen performing at Michael Jackson’s memorial service.
In 2010, he performed at the National Memorial Day Concert in Washington DC and he also performed at the AFL Grand Final Replay. Two years later, he released his tenth studio album, ‘Tuskegee’, which also features the hit singles of other recording artists.
In 2013, he announced that he would launch the ‘All the Nights All Night Long’ tour, on ‘The Today Show’ on NBC. 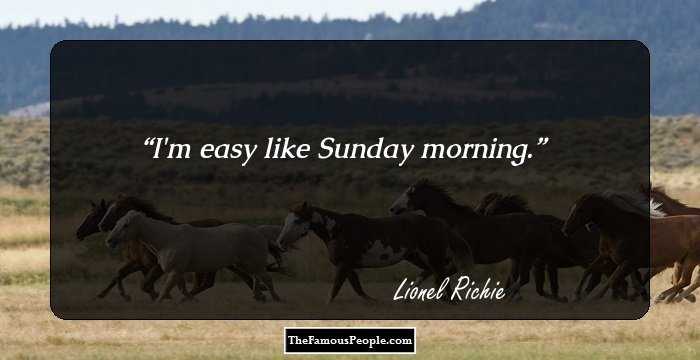 Quotes: Like
Major Works
‘Commodores’, the self-titled album released in 1977 with his group, the ‘Commodores’ spent a total of eight weeks on popular music charts and is also listed as one of the Top 5 albums of the band. The album features the popular sex anthem, ‘Brick House’, which peaked at the no. 5 position on the US R&B chart and helped catapult the band into the R&B spotlight.
His solo venture, ‘Dancing on the Ceiling’, which released in 1986, is considered one of the most successful solo ventures of his till date. It was featured at the no.1 position on the Billboard Hot 200 and sold nearly 4 million copies. Following the release of this album, he withdrew from the music industry for nearly 6 years, returning with another super hit album, ‘Back to Front’.
Continue Reading Below
Awards & Achievements
In 1985, he won a Grammy Award for ‘Can’t Slow Down’ under the category, ‘Album of the Year’. He also won another Grammy Award for ‘Song of the Year’.
He was inducted into the ‘Songwriters Hall of Fame’, in 1994.
He won the George and Ira Gershwin Lifetime Achievement Award, in 2008.
He was awarded a star on the Hollywood Walk of Fame. 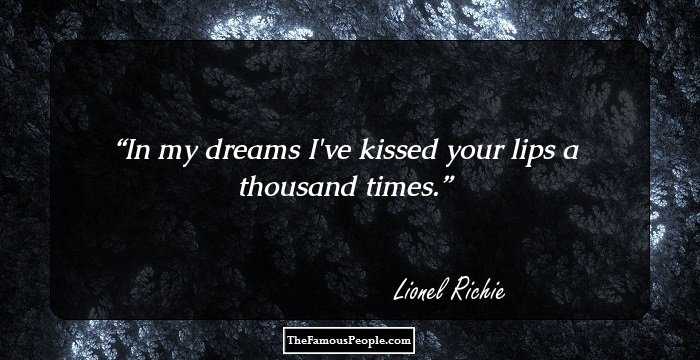 Quotes: Dreams
Personal Life & Legacy
He married Brenda Harvey on October 18, 1975. While he was still married to her, he began an affair with Diane Alexander. He separated from Harvey after she found out about his misdeeds and thereafter she brutally attacked him and Alexander.
While he was still married to Harvey, the couple adopted Nicole Richie when she was 9-years-old.
He officially married Diane Alexander on December 21, 1995. The couple has a son, Miles Brockman and a daughter, Sofia. The couple divorced in 2004.
He is an avid breast cancer activist with the ‘Breast Cancer Research Foundation’ for which he raised nearly $3.1 million.
Trivia
This famous American singer-songwriter’s music is hugely popular in the Middle East. His song, ‘All Night Long’ was played on the night of the American invasion in 2003 by the Iraqis.

See the events in life of Lionel Richie in Chronological Order