(One of the World's Best-Selling Artists of All Time)

Linda Maria Ronstadt is a famous American singer and songwriter who has achieved immense popularity and success in the world of music. Starting in the late 60s her music career spans across four decades and encompasses music from different genres including rock, rhythm blues, folk music and jazz among others. Her versatility in delivering a wide range of styles and her mesmerising voice appealed the masses. Through her music people came to enjoy the more conventional Mexican music and older pop versions as also work of the likes of Chuck Berry, Elvis Costello and Buddy Holly. During the 70s she remained the most successful and top-selling female singer who was tagged ‘Queen of Rock’ and ‘First Lady of Rock’. She emerged as the first female to achieve ‘arena class’ rock star fame with her chart-bursting albums like ‘Simple Dreams’ and ‘Heart Like a Wheel’. The latter fetched her first of her eleven ‘Grammy Awards’. In her music career, she has achieved great heights including earning many platinum and multiplatinum albums, induction in the ‘Rock and Roll Hall of Fame’, being enlisted several times in the ‘Billboard Hot 100’ and ‘Billboard album chart’ among others. She has earned several awards including ‘Emmy Award’, ‘ALMA Award’, ‘Academy of Country Music’ awards and ‘American Music Awards’ among numerous others. Macaulay Culkin
15th July In History
DID WE MISS SOMEONE?
CLICK HERE AND TELL US
WE'LL MAKE SURE
THEY'RE HERE A.S.A.P
Quick Facts

American People
Rock Singers
Lyricists & Songwriters
American Women
Arizona Musicians
Childhood & Early Life
She was born on July 15, 1946 to Gilbert Ronstadt and Ruth Mary (Copeman) Ronstadt. Her father was a wealthy merchant and her mother a homemaker.
She belonged to an influential family whose contributions in Arizona in the fields of commerce, wagon making, music and others were immense which are recorded in the library of ‘University of Arizona’.
She was brought up along with her siblings Peter, Michael J., and Gretchen in the family ranch. A musical atmosphere prevailed in her home since childhood with her father teaching Mexican songs to the children. She took interest in learning guitar possibly from her father who used to play guitar.
She attended the ‘Catalina High School’. Here, she met Bobby Kimmel, her senior and a local folk musician, who later shifted to Los Angeles. During this time she and her siblings Peter and Suzi used to perform gigs around Tucson tagging themselves as the ‘The Three Ronstadts’ and the ‘Union City Ramblers’ among others.
She joined the ‘University of Arizona’ in Tucson, but after a semester she dropped out to join Bobby in Los Angeles. 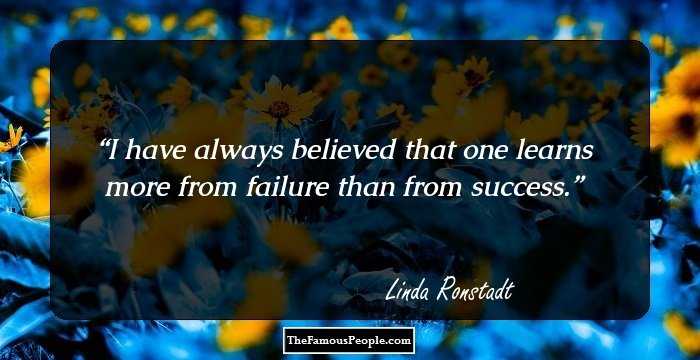 Women Singers
Cancer Singers
Cancer Musicians
Women Musicians
Career
After joining Bobby in Los Angeles in December 1964, she teamed up with him and Kenny Edwards. They formed ‘Stone Poneys’, a folk-rock trio where she became the lead vocalist.
In 1966, they were signed by ‘Capitol Records’ and in 1967 their first two albums ‘The Stone Poneys’ and ‘Evergreen Vol. 2’ were released. ‘Evergreen Vol. 2’ garnered moderate success with only one hit song ‘Different Drum’. The trio parted ways prior to the release of their third album, ‘Linda Ronstadt, Stone Poneys and Friends, Vol. III’.
In 1969, her solo record ‘Hand Sown … Home Grown’ was released by ‘Capitol Records’. During the late 60s and the 70s she appeared as herself in several television shows including ‘It’s Happening’ (1968-69) ‘Cher’ (1975) and ‘Saturday Night Live’ (1977 onwards). She also lent her voice for several commercials.
In 1970s, she toured extensively with Neil Young, the ‘Doors’ and others. In 1971 she toured for a while with a backing band that included players like Randy Meisner, Glenn Frey, Don Henley and Bernie Leadon who later formed the ‘Eagles’.
She did not have much success even though some of her solo albums including ‘Silk Purse’ (1970) and ‘Different Drum (1974) - a compilation of her songs including few from the ‘Stone Poneys’, were released in the early 70s. Her first album with Asylum Records, ‘Don’t Cry Now’ (1973) was received well which later garnered a double platinum certification.
Her real breakthrough came with ‘Heart Like a Wheel’ in 1974 which emerged as a chart-topper and made her a household name. She received her first ‘Grammy Awards’ in 1975 as the ‘Best Female Country Vocalist’ for the song ‘I Can't Help It (If I'm Still In Love With You)’ from the album.
‘Greatest Hits’ (1976), a compilation of her songs remains one of her highest selling albums garnering sales of more than seven million units.
Her other chart-busters followed including ‘Simple Dreams’ (1977) and ‘Living in the USA’ (1978) making her the first female ‘arena class’ rock star. She remained the most successful and top-selling female singer of the 70s with most of her albums going Platinum.
Her 1980 released album ‘Mad Love’ with Asylum also went Platinum and reached the fifth position on the ‘Billboard’ album chart.
Continue Reading Below
In 1983, she treaded a new music genre, the traditional pop music with her album ‘What’s New’ which received a Triple Platinum certification in the US. Her success story continued with ‘Lush Life’ (1984) and ‘For Sentimental Reasons’ (1986), both going Platinum.
In 1987, she released her all-Spanish album ‘Canciones De Mi Padre’, which consists of a number of traditional Mexican songs, as a tribute to her Hispanic heritage. It fetched her ‘Grammy Award’ in the category of ‘Best Mexican-American Performance’ in 1988 and remains the best-selling non-English album in the history of music.
Her mainstream pop music album ‘Cry Like a Rainstorm, Howl Like the Wind’ (1989) garnered critical acclaim and received a Triple Platinum certification reaching number seven on the ‘Billboard’ chart. She received two ‘Grammy Awards’ along with Aaron Neville for their duet songs ‘Don't Know Much’ and ‘All My Life’ in 1989 and 1990 respectively.
She produced the classical music album, ‘Cristal – Glass Music Through the Ages’. In 1987, she along with Emmylou Harris and Dolly Parton produced the album ‘Trio’ and in 1999 they released ‘Trio II’. They received the ‘Grammy Awards’ for ‘Best Country Collaboration with Vocals’ for their song ‘After the Gold Rush’ in ‘Trio’ II.
During the 80s and 90s she appeared in several television shows. She received a best actress nomination for ‘Tony Award’ for her performance in ‘The Pirates of Penzance’ during 1981-82 and the ‘Golden Globe’ award for her performance in the show in 1983.
She was a recipient of the ‘Primetime Emmy Award’ for her performance in ‘Canciones de Mi Padre’ as a vocalist in 1988.
Her two other Spanish language albums ‘Mas Canciones (1991) and Frenesí (1992) fetched her ‘Grammy Awards’ for ‘Best Mexican-American Album’ in 1993 and ‘Best Tropical Latin Album’ in 1992 respectively.
She produced the album ‘Dedicated to the One I Love’ in 1996 which consisted of classic rock n roll songs re-produced as lullabies which earned her the ‘Grammy Awards’ for ‘Best Musical Album for Children’ in 1996.
Her other noted works of the 90s include highly acclaimed album ‘Winter Light’ (1993), ‘Feels Like Home’ (1995), ‘We Ran’ (1998) and ‘Western Wall: The Tucson Sessions’ (1999)
Continue Reading Below
In 2004 she treaded the traditional jazz genre with ‘Verve Records’ and released her album ‘Hummin' to Myself’, which charted at number two at the ‘Top Jazz Albums’ of the ‘Billboard’.
Her last studio album ‘Adieu False Heart’, a fusion of rock and Cajun music, released in 2006 in collaboration with Ann Savoy marked a sale of over thirty million units in the US.
In September 2013, she released her autobiography ‘Simple Dreams: A Musical Memoir’ which found place in the top ten of the ‘The New York Times Best Sellers List’.
She was inducted in the ‘Rock and Roll Hall of Fame’ in April 2014 and on July 28 that year she received the ‘National Medal of Arts and Humanities’ from President Barack Obama. 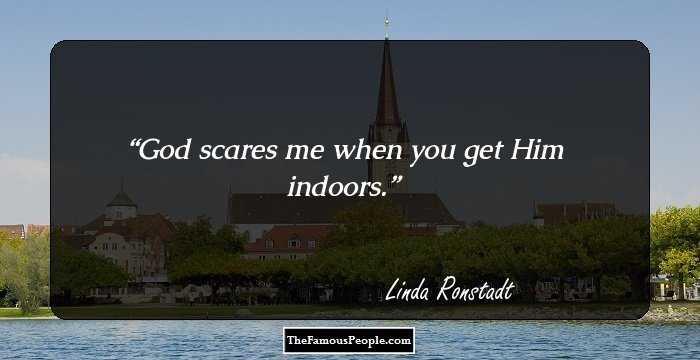 Quotes: You, Me, God
Recommended Lists:

American Singers
Cancer Pop Singers
Female Pop Singers
American Musicians
Personal Life & Legacy
Though she never married she was romantically linked with many famous personalities.
Her relationship with Jerry Brown, the then Governor of California and a Democratic Presidential candidate during the mid-seventies became a hot topic for global media.
Her relationship with the famous comedian Jim Carrey lasted for eight months during1983. Though she got engaged with filmmaker George Lucas during mid-eighties, the relationship never culminated into marriage.
She adopted her daughter Mary Clementine in December 1990 and son Carlos Ronstadt in 1994, both in their infancy.
In 1997, she was diagnosed with Hashimoto's thyroiditis, which was a cause for her weight gain.
She shifted from Los Angeles to San Francisco after three decades and in 1997 she shifted to Tucson, Arizona, her birthplace, after selling off her home in San Francisco. Later she returned to San Francisco although maintaining her Tucson house.
She was diagnosed with Parkinson's disease in December 2012 which she disclosed in August 2013. The disease causing loss of muscle control became a barrier in her singing.
She is a self-proclaimed agnostic.
Recommended Lists:

See the events in life of Linda Ronstadt in Chronological Order