Lee Iacocca, born as Lido Anthony Iacocca, is a businessman who attained a celebrity status by reviving the fortunes of automobile manufacturer Chrysler Corporation which was on the verge of bankruptcy when he took over as the CEO. Previously, he had worked at the Ford Motor Company where he had successfully designed several popular models of cars, the most notable of which were the Ford Mustang, Ford Escort, Mercury Cougar and Mercury Marquis. He was a brilliant employee at Ford and had eventually risen to the post of President. However his business ideas were unorthodox and he possessed a brash management style which brought him into conflict with Henry Ford II who fired him. Though shocked at being fired from the company where he had put in three decades of hard work, he was not away for long from the automobile business. Chrysler Corporation which was performing very poorly in the market and suffering huge losses invited him to join them. Ford’s loss proved to be Chrysler’s gain as Iacocca engineered one of the most famous turnarounds in the history of American automobile industry by rescuing the struggling corporation and enabling it to register profits again. He was named the 18th-greatest American CEO of all time by the Portfolio. Bill Ford
Automobile Industry #6
Business People #123
DID WE MISS SOMEONE?
CLICK HERE AND TELL US
WE'LL MAKE SURE
THEY'RE HERE A.S.A.P
Quick Facts

American Celebrities
American Men
Princeton University
Libra Entrepreneurs
American Entrepreneurs
Childhood & Early Life
Iacocca was born as the son of Nicola Iacocca and Antonietta Perrotta. His parents were Italian immigrants who ran a restaurant. His father was an astute businessman who also owned a theatre and a car rental agency. Lee inherited the love for automobiles from his father and also learned the skills of running businesses.
He graduated from the Allentown High School and attended Lehigh University from where he earned a degree in industrial engineering. He won the Wallace Memorial Fellowship to attend Princeton University where his electives were politics and plastics.
He could not enlist in the military during the World War II due to health reasons. 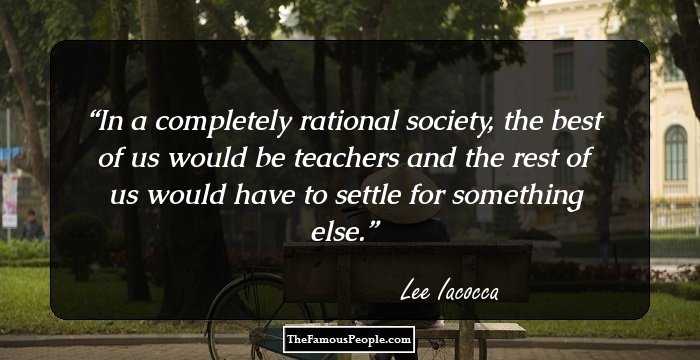 Famous Beautiful Women With Green Eyes
Career
He joined Ford Motor Company in 1946 as an engineer. However, he soon shifted to the department of sales and marketing where he performed very well.
He was made the assistant sales manager in the Philadelphia district where he launched the ’56 for 56’ campaign offering loans and down payment options on models of 1956 year cars. The highly successful campaign made him a national hero.
He was named as the vice-president of Ford’s car and truck group in 1960. He rose to the position of executive vice-president in 1967.
He directed the design vice-president in modeling the Lincoln Continental Mark III car which was sold from 1969 till 1971 in the U.S. The car was a personal luxury car launched under the Lincoln Mark series by Ford.
Iacocca was made president of the Ford Corporation in 1970. However, his unorthodox management style and attitude brought him in conflict with Henry Ford II, the chairman and CEO of Ford Corporation. After years of tension between the two, Iacocca was finally fired from the company on 1978.
The automobile company Chrysler Corporation was near bankruptcy at that time and they invited Iacocca to become the president of the struggling corporation. He began rebuilding the company upon his joining by downsizing and selling off the loss-making division and by bringing in his associates from his former company.
In 1979, he approached the U.S. Congress for a loan guarantee as the company needed heavy financial investments for a turnaround. He received the loan guarantee from the government in what many believed was an unprecedented move.
Under his direction Chrysler released the Dodge Aries and Plymouth Reliant under the K-Car line in 1981. These compact cars were based on design proposals that Ford had rejected while Iacocca was working for them.
Along with Hal Sperlich, a former colleague from Ford, he brought to Chrysler the “Mini-Max” project which resulted in the highly successful Dodge Caravan and Plymouth Voyager in 1983.
Continue Reading Below
With the success of these cars, combined with other radical reforms which Iacocca brought about, Chrysler was able to reverse its misfortune and pay back all its accumulated debts, and even began to earn profits.
He directed Chrysler to acquire AMC in 1987, bringing the Jeep division under the corporation. The jeep division was considered to be among the most profitable in automobile industry.
He became a celebrity of sorts and appeared in a number of commercials for the company. By the end of 1992 he retired as the President, CEO, and Chairman of Chrysler.
He has also co-authored several books including his best selling autobiography, ‘Iacocca: An Autobiography’ (1984). 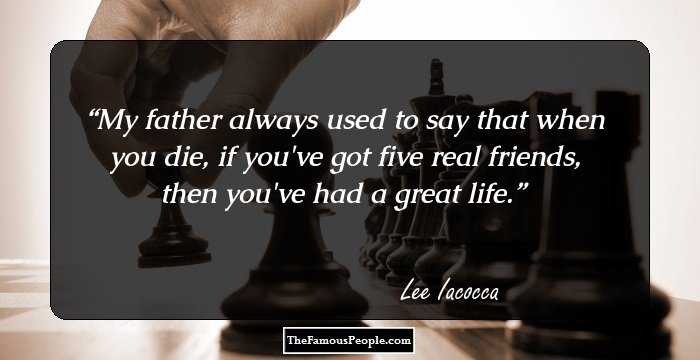 Quotes: You, Life, Friends
Major Works
Iacocca, considered as one of America’s greatest CEOs, is best known for rescuing the struggling automobile company Chrysler Corporation from bankruptcy and revitalizing it. Under his direction and guidance the company not only paid off all its debts, but also started earning profits.
Awards & Achievements
He received the S. Roger Horchow Award for Greatest Public Service by a Private Citizen in 1985. 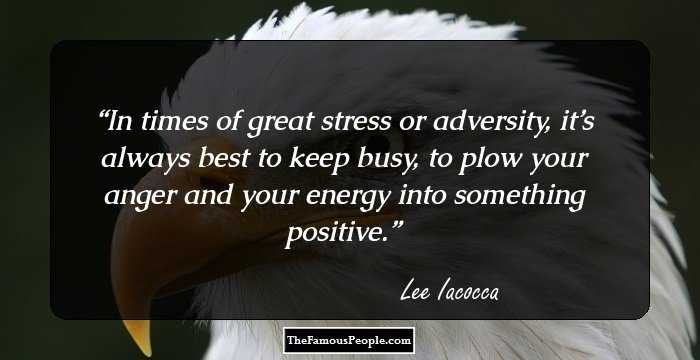 Personal Life & Legacy
He married Mary McCleary in 1956. They had two daughters. Mary died from diabetes in 1983.
He married for the second time to Peggy Johnson in 1986 but their marriage was annulled the very next year.
He married Darrien Earle in 1991 and divorced her three years later.
Following the death of his first wife from diabetes, he began to actively support the cause of diabetes research. He is one of the main patrons of the research of Denise Faustman at Massachusetts General Hospital.
The Lee Iacocca Award, established by the Iacocca Family Foundation in 2006 is a prestigious award that is given for Dedication to Excellence in Perpetuating An American Automotive Tradition.
Trivia
This legendary businessman played the character of Park Commissioner Lido in an episode of ‘Miami Vice’.
You May Like

Quotes By Lee Iacocca | Quote Of The Day | Top 100 Quotes

See the events in life of Lee Iacocca in Chronological Order