Leslie Nielsen was one of the established Canadian-American actors who made it big in the world of entertainment with his versatile acting. Starting off as an Air Force officer, he soon got relieved from his duties and joined the entertainment buzz world as a disc jockey. No sooner he received a scholarship from Neighbourhood Playhouse which helped him make a debut on television in 1948. In a short span, he made more than 50 television appearances. In 1956, he made his entry into the big screen and rest as they say is history. He continued to show his talent throughout his career - appearing in more than 100 films and 1500 television shows. In his career spanning a little over six decades, he played more than 220 characters. Interestingly, Nielsen acted in various genres - be it drama, comedy or serious roles but earned much admiration as a comedian. He was bestowed with numerous awards in his lifetime including induction into the Hollywood and Canadian Hall of Fame. American Celebrities
Canadian Celebrities
American Men
Canadian Men
Aquarius Actors
Male Comedians
Childhood & Early Life
Leslie Nielsen was born to Ingvard Everson Nielsen and Mabel Elizabeth in Regina, Saskatchewan. While his father was Danish, his mother was a Welsh immigrant. He had two brothers.
The ruthless attitude of his father, who was a Royal Canadian Mounted Police officer, led young Nelson to long for freedom right from his childhood. As such, right after completing education from Victoria School of Performing and Visual Arts in Edmonton, he joined the Royal Canadian Air Force.
At the Royal Canadian Air Force, he was trained as an aerial gunner during the latter part of World War II. Relieved from his duties, he took too working as a disc jockey in Alberta radio station in Calgary.
He then took up a course at the Lorne Greene Academy of Radio Arts in Toronto. It was while studying there that he received a scholarship to Neighborhood Playhouse.
Completing his course at the Neighborhood Playhouse, he studied at the Actor Studio. Subsequently he launched himself as an actor. 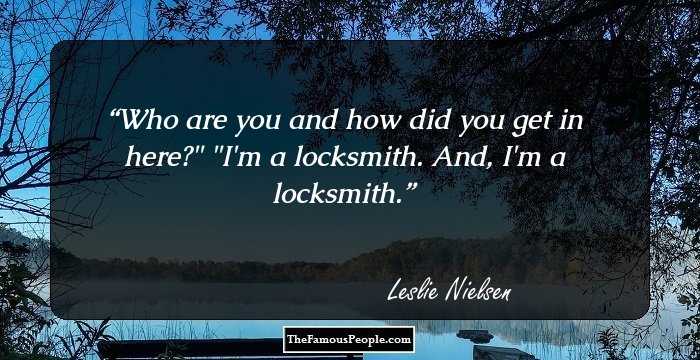 The Best Black Actresses Of All Time
Career
He made his television debut with an appearance in an episode of the tele-series, Studio One, alongside Charlton Heston. Thereafter, he was seen in the television show, Battleship Bismarck.
The decade of 1950s was a progressive period for him as he was seen in a number of live programs and shows. He appeared in more than 50 live shows and narrated several documentaries and commercials.
In the mid-1950s, he moved to Hollywood to make his mark on the big screen. Year 1956 proved to be an important one in his career graph as he launched himself in the film fraternity with the film, ‘The Vagabond King’. Though the film was barely successful, it earned him a role in the sci-fi film ‘Forbidden Planet’.
The success of ‘Forbidden Planet’ led him to sign up a long term contract with MGM. Other films that he was a part of the same year include ‘Ransom!’ and ‘The Opposite Sex’.
The following year, he was cast in the film, ‘Hot Sumer Night’. He then bagged a lead role opposite Debbie Reynolds in the romantic comedy ‘Tammy and the Bachelor’. The film broadened new horizons for him as he was considered both a dramatic actor and a romantic lead.
He left MGM Studios and took up the role of an American Revolutionary War hero, Francis Marion, in the Disney miniseries, ‘The Swamp Fox’. Other television appearances include ‘Justice’, ‘Alfred Hitchcock Presents’, ‘The Virginian’ and ‘The Wild Wild West’.
In the 1960s decade, he was seen both in television and a couple of films including, ‘The New Breed’, ‘Hawaii Five-O’ and ‘The Bold Ones: The Protectors’. His television roles include ones in ‘Daniel Boone with Fess Parker’ and ‘Hawaii Five-O’.
He followed the 1970s decade with a string of films which were low on quality. He was seen in several films including the all-star disaster epic ‘The Poseidon Adventure’, ‘Project: Kill’, ‘The Amsterdam Kill’ and ‘City on Fire’
The decade of 1980s proved to be a turning point in his career as he re-invented himself as a comedian and appeared as Dr Shirley Rumack in the film, ‘Airplane!’ which proved to be a breakthrough in his career. The film was hugely successful, both commercially and critically, and catapulted his position as an actor of calibre.
Continue Reading Below
Post the reigning success of his deadpan comic abilities with ‘Airplane!’ he was cast in the lead role in the television-series, ‘Police Squad!’. In it, he played the role of the hilariously inept police officer Detective Frank Drebin.
While his career as a comedian in films was highly appreciated, he did not let go off his dramatic abilities as an actor and starred in a couple of non-comedy drama films such as ‘Prom Night’, ‘Creepshow’ and ‘Nuts’.
Though tele-series ‘Police Squad’ was cancelled after six episodes, it was reprised six years later with a film adaptation of the series, titled, ‘The Naked Gun: From the Files of Police Squad!’. The movie was hugely successful grossing more than $78 million at the box office and gaining great critical comments as well.
The success of the film, ‘The Naked Gun: From the Files of Police Squad!’ led to release of two sequels ‘The Naked Gun 2�: The Smell of Fear’ and ‘Naked Gun 33 33⅓: The Final Insult’, which was released in 1991 and 1994 respectively. Both the films surpassed the records set by the former.
Capitalizing on the success of the ‘Naked Gun’ franchise, he came up with a fictitious biography titled, ‘The Naked Truth’. The book much like its film counterparts was well accepted by the readers.
Post the glorious success of ‘Naked Gun’, he was seen in various films playing a similar role. However, none achieved the fathom success like the franchise. Also, his portrayal of similar role was hugely panned by the critics and audience.
The later years of his career met with criticism as he unsuccessfully attempted at parodied films and children’s comedies. Most of his ventures duped badly at the box office. At the time when his career graph was on an all-time low, his cameo in the film, ‘Scary Movie 3’ proved to be a saving grace. It led to a reprisal of his role in the sequel, ‘Scary Movie 4’.
Despite being in his eighties, he had an active film career. He did not limit himself only to acting, but instead moved further providing voice overs, on-camera appearances, and serving as a celebrity contestant.
His later appearances in films include ‘Music Within’ as Bill Austin, ‘Superhero Movie’ as Uncle Albert, ‘An American Carol’ as Grampa/ Osama Bin Laden, ‘Slap Shot 3: The Junior League’ as Mayor of Charlestown, ‘Spanish Movie’ as Doctor and ‘Stan Helsing’ as Kay.
Continue Reading Below 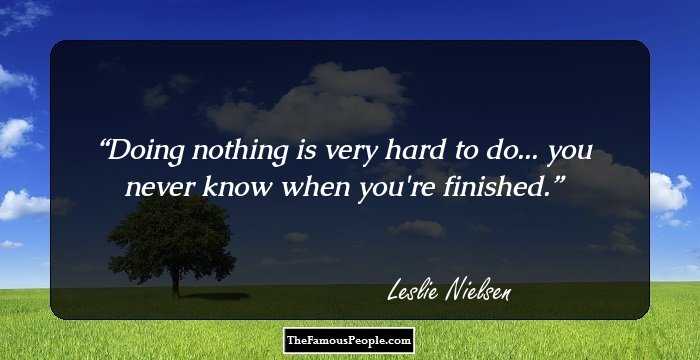 Quotes: You, Never
Awards & Achievements
He received various awards in his lifetime for his contribution to cinema. Some of those include, UCLA’s Jack Benny Award, ACTRA Award of excellence and so on.
He received a star on the Hollywood Walk of Fame. Furthermore, he was inducted into the Canada Walk of Fame.
In 1997, a Golden Palm Star on the Palm Springs, California, Walk of Stars was dedicated to him.
In 2002, he was conferred with the title of Officer of the Order of Canada. The same year, he was named honorary citizen of West Virginia and an ‘Ambassador of Mountain State Goodwill’.
The following year, Grant MacEwan College named its School Of Communications after him.
Personal Life & Legacy
He married four times in his lifetime. His partners include Monica Boyar, Alisande Ullman, Brooks Oliver and Barbaree Earl. In his four marriages, he fathered two daughters.
He was an avid fan of golf and loved playing the sport.
In 2010, he was hospitalized for treatment of pneumonia at the Florida hospital. A few days later, it was announced that he died in his sleep due to complications from pneumonia. He was interred at Fort Lauderdale's Evergreen Cemetery
Trivia
This actor of the ‘Naked Gun’ franchise fame was legally deaf and used hearing aid all his life to resolve the hearing impairment issue.

See the events in life of Leslie Nielsen in Chronological Order