Leroy Sanchez is a Spanish-born, Los Angeles-based singer and songwriter, who is known for his emotive, acoustic-based pop music and dance-oriented R&B music. He learned music on his own, and at the age of 15, he started experimenting by posting covers on ‘You Tube.’ He was discovered by ‘Grammy’-winning producer Jim Jonsin, who invited him to Miami. He soon signed a contract with the record label ‘Rebel Rock’ and released his debut single, ‘By My Side,’ which was closely followed by his other hit number ‘Little Dancer.’ He has worked with many heavyweights of the music industry, such as rapper Machine Gun Kelly, Rico Love, and Frank Romano. His single ‘See You’ earned him a nomination for the ‘Premios Juventud Award,’ which recognizes exceptional Spanish talent. He was also nominated for a ‘Teen Choice Award.’ After gaining a foothold in the US, he made several tours, too, including the opening act of ‘Boyce Avenue’ and his own tours to promote his number ‘Man of the Year’ and his EP, ‘Elevated.’ He has worked with ‘CoachArt’ to provide inspiration to children suffering from chronic illnesses and has tried to spread the message of hope through his music. He currently has over 400 million views and more than three million subscribers on his ‘YouTube’ channel.
Continue Reading Below 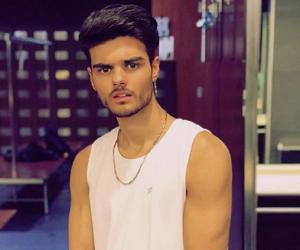 Spanish People
Spanish Men
Virgo Singers
Male Singers
Male Musicians
Childhood & Early Life
Leroy Sanchez was born on September 1, 1991, in Abetxuko, Vitoria, Spain. He loved music since childhood and taught himself to play his mother’s guitar while spending time with his friends and family.
In his teenage years, he took piano lessons. At 14, he participated in the Spanish vocal competition ‘Veo Veo.’ Although he did not win a prize in the competition, the experience motivated him to post his self-made videos online. This was his first step to becoming a professional musician.
Continue Reading Below
You May Like

Famous Beautiful Women With Green Eyes
Career
Leroy Sanchez started his music career at the age of 15, when he uploaded his first cover on ‘YouTube.’ His music was an instant hit and received positive reviews from all over the globe. Encouraged by his success, in January 2007, he launched his own ‘YouTube’ channel. He then worked on a number of covers, including ‘Hello’ by Adele and ‘Stay with Me’ by Sam Smith, both of which became immensely popular.
American record producer and entrepreneur Jim Jonsin heard Sanchez on ‘YouTube’ and recognized his potential. He invited Sanchez to travel to Miami to pursue his music career. Sanchez accepted the offer and relocated to the US to follow his dream, in 2011.
Initially, he struggled to cope with the new surroundings. However, people came to know about him through the internet, and he soon signed contracts with the record labels ‘Rebel Rock’ and ‘Interscope Records.’ He released his debut single, ‘By My Side,’ in 2014. This was closely followed by the track ‘Little Dancer’ that became a big hit.
His music became popular with the younger generation, and Leroy soon became a name to reckon with, in the American music arena. He worked with a number of heavyweights of the music industry and performed in rapper Machine Gun Kelly’s 2015 track ‘Gone.’ He made his mark in the industry and worked with upcoming producers and songwriters such as Rico Love, Danja, Frank Romano, and Jenn Decilveo.
In 2016, he released the single ‘See You’ and was nominated for the ‘Premios Juventud Award,’ meant for exceptional artists of Spanish origin. He was also nominated for a ‘Teen Choice Award’ the same year. This boosted his ratings in the industry. He soon toured with the band ‘Boyce Avenue’ as part of their opening act.
Between 2016 and 2017, he composed songs for artists such as Carlos Marco, Sébastien Izambard, and Antonio José, for their albums ‘Chalk Dreams,’ ‘We Came Here to Love,’ and ‘Senti2,’ respectively.
In August 2017, Leroy Sanchez released his debut EP, ‘Elevated,’ for which he had composed the lyrics and the music. Prior to this, from January to March 2017, he had popularized his style of music with his ‘Man of the Year’ international tour. He also made a special ‘Elevated’ tour, from September to November 2017, which was appreciated by his fans. By then, he had mastered the art of performing on stage and interacting with his fans.
He has gained more than 400 million views and has over three million subscribers on his ‘YouTube’ channel. His fans closely follow his personal life on social media and are eagerly awaiting his next release.
Major Works
Leroy Sanchez has sung a number of cover songs and has composed his own music, too. His original singles include the hits ‘By My Side’ (2014), ‘Little Dancer’ (2015), and ‘See You’ (2016).
Continue Reading Below
He released his debut EP, ‘Elevated,’ in 2017.
His major tours have been with the band ‘Boyce Avenue’ in 2016, followed by his personal tours to promote his track ‘Man of the Year’ and his EP ‘Elevated’ in 2017.
Awards & Achievements
In 2016, he was nominated for the ‘Premios Juventud Award.’
He was also nominated for a ‘Teen Choice Award’ in 2016.
Personal Life
Leroy Sanchez currently lives in Los Angeles, US. Although he is active on social media, his posts are mainly related to his professional life.
In his effort to give something back to society, he has worked with the organization ‘CoachArt,’ which works for children suffering from chronic illnesses. His music promotes a positive approach to life and motivates the younger generation to face life and overcome hardships.
According to social media, he is currently single.
Trivia
Sanchez worked as a background singer for the tenth season of the popular reality show ‘American Idol’ when he was fairly new in the US.
‘Grammy’-winner Jim Jonsin, besides discovering Sanchez, has been the producer for top artists Beyoncé, Lil Wayne, Kelly, and Usher.
Sanchez’s music focuses on the lyrics and the vocals, because he believes those are the areas his fans enjoy. His work carries a message for the youth and has a unique identity.

See the events in life of Leroy Sanchez in Chronological Order