Leonard Cohen was a Canadian singer, songwriter, and novelist remembered for his literary works and his musical creations alike. Beginning his career as a poet and novelist, he eventually ventured into music when he was in his thirties. Interested in poetry from his school days, he started composing poems as a young boy. He also learnt guitar and had an affinity for folk music. His interest in music and guitar was further enhanced when he met a flamenco guitarist. Simultaneously, he pursued his literary works and penned many poems and even got them published in magazines. Soon he published a collection of poems entitled ‘The Spice-Box of Earth’ which got him recognized in the literary world. He then explored his creativity in writing fictional stories and eventually wrote novels which received appreciation from critics and readers alike. This writer then embarked on a new journey and dabbled with his musical creativity and emerged as a singer and songwriter. He worked on various themes like relationships, sexuality, politics and religion and composed songs which turned out brilliantly and also established Cohen’s place in the musical world. However, this versatile individual did not forgo his literary work and concurrently worked on literature and music, earning fame in all the fields he embarked on. Drake
Lyricists & Songwriters #14
Folk Singers #2
Musicians #93
DID WE MISS SOMEONE?
CLICK HERE AND TELL US
WE'LL MAKE SURE
THEY'RE HERE A.S.A.P
Quick Facts

Canadian Celebrities
Lyricists & Songwriters
Canadian Men
Virgo Singers
Male Singers
Childhood & Early Life
Leonard Cohen was born to Nathan Cohen and Marsha Klonitsky on 21st September 1934, in Westmount, Quebec. He lost his father at the age of nine.
After receiving elementary education at the ‘Roslyn Elementary School’ in 1948, he joined the ‘Westmount High School’. During high school he learnt poetry and music, and took special interest in the compositions of Spanish poet Federico Garcia Lorca.
He got trained in playing a guitar in his teenage and after he got acquainted with a flamenco guitarist, and soon made a shift from acoustic to classical guitar.
He joined the ‘McGill University’ in 1951, where he was the president of the ‘McGill Debating Union’. The poems ‘Sparrows’ and ‘Thought of a Landsman’, which he composed during his university days made him the winner at the ‘Chester MacNaghten Literary Competition’.
The year 1954, witnessed the publication of his first poems in the ‘CIV/n’ magazine.
He completed his bachelor’s degree in arts in the year 1955. He was inspired by literary stalwarts like Walt Whitman,William Butler Yeats,Henry Miller, Irving Layton, and Federico Garcia Lorca.
In 1956, he published a book of his poems written during his teenage, named ‘Let Us Compare Mythologies’. This poet dedicated the book in memory of his late father.
He attended the ‘McGrill University Faculty of Law’ and then he moved to New York where he joined the ‘School of General Studies at Columbia University’. 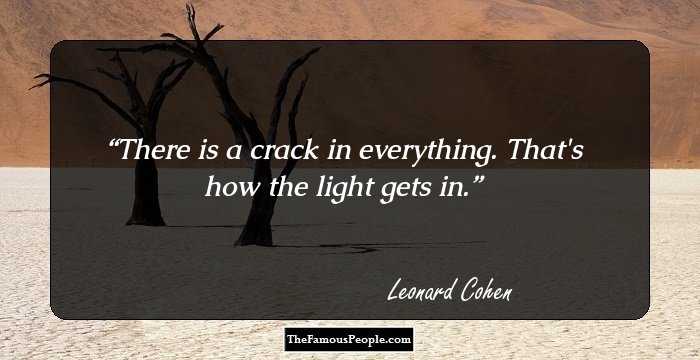 Famous Beautiful Women With Green Eyes
Career
In 1957, Leonard Cohen went back to Montreal, Canada, where he engaged in some jobs and simultaneously, continued his literary works penning poems and fictional stories.
In 1961, his collection of poetry entitled ‘The Spice-Box of Earth’ was published by the publishing house ‘McClelland & Stewart’ of Canada. The book was received well by the readers and helped Cohen enter the poetic world of Canada.
During 1960s, he penned many poems and fictions and the decade saw the publication of his novels ‘The Favourite Game’ and ‘Beautiful Losers’ and collection of poems ‘Flowers for Hitler’, ‘Parasites of Heaven’ and ‘Selected Poems 1956-1968’.
He then focussed less on writing and was more engaged in his musical pursuits. He went to the United States to embark on his career as singer-songwriter. His song ‘Suzanne’ which was sung by American artist Judy Collins became a hit.
During 1960s, also sang in some folk festivals and his talent caught the attention of John H. Hammond. Hammond who worked for the ‘Columbia Records’ company signed Leonard for a contract with the company.
In 1967, his musical career got a kick-start when his album ‘Songs of Leonard Cohen’ was released. This album received acclamations and featured on the charts in the UK even after a year of its release. This was followed by his albums ‘Songs From a Room’ and ‘Songs of Love and Hate’.
In the beginning of 1970s, he embarked on two tours, one in United States, Canada and Europe and the second included Europe and Israel. During the same time, he published his book ‘The Energy of Slaves’.
In 1974, he and American music producer John Lissauer worked together on Leonard’s new album ‘New Skin for the Old Ceremony’ and even toured Europe, US and Canada to promote the record.
In 1975, he toured the US and Canada along with Lissauer to endorse his new album ‘The Best of Leonard Cohen’. The following year, he went on a tour to Europe to promote the same album.
Continue Reading Below
In 1977, his album ‘Death of a Ladies’ Man’ was produced and a year later, a book by the same name was printed.
His album ‘Recent Songs’ was released in 1979, and with this album he turned a producer.
His collection of poems ‘Book of Mercy’ hit the book stores in 1984, and this book was immensely successful, and the poet was highly appreciated. The same year, his album ‘Various Positions’ was released, which was followed by the release of his eighth studio album ‘I’m Your Man’.
His only published work in 1990s was ‘Stranger Music: Selected Poems and Songs’, and the next decade saw the release of his books ‘Book of Longing’, ‘The Lyrics of Leonard Cohen’, ‘Poems and Songs’. He also recorded an album during this period entitled ‘The Future’.
From 2001-04, he released two albums named ‘Ten New Songs’ and ‘Dear Heather’.
His literary work in 2012 comprised of a collection of poems named ‘Fifteen Poems’, and he also recorded an album ‘Old Ideas’ the same year.
In 2014, he worked on another album ‘Popular Problems’ which went on to win the Album of the Year award at the ‘Juno Awards’ the following year.
He turned 80 in 2014 but showed no signs of slowing down. In 2015 he began working on yet another album, ‘You Want It Darker.’ He was suffering from health problems during this time and intuitively knew that the end was near. This album focused on issues like death, God, and humor, and was released in October 2016 when Leonard Cohen was dying. 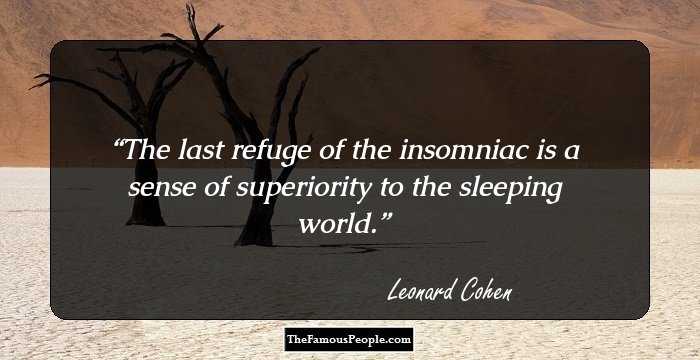 Continue Reading Below
Major Works
His song ‘Hallelujah’ is considered to be one of the biggest hits of his career. This song has been sung by around 200 artists in different languages and statistics by renowned organizations estimate that the record has sold five million copies till 2008. It has also been covered by the ‘BBC Radio Documentary, and several movies and television shows have used this song.
Awards & Achievements
In 1991, this talented artist was inducted into the ‘Canadian Music Hall of Fame’.
He won the ‘Juno Award’ for Best Male Vocalist in 1993. The same year, he was awarded with the ‘Governor General's Performing Arts Award’ for Lifetime Artistic Achievement.
In 1994, the ‘Juno Award’ for Songwriter of the Year was won by him.
He was felicitated by the ‘Order of Canada’ in the year 2003.
This songwriter was included in the ‘Canadian Songwriters Hall of Fame’ in 2006. The following year, he won the ‘Grammy Award’ for Album of the Year.
In 2008, he was inducted in the ‘Rock and Roll Hall of Fame’ by Lou Reed. The same year, he was made the Grand Officer of the ‘National Order of Quebec’.In 2010, he this artist was awarded with the ‘Grammy Lifetime Achievement Award’. The same year, he was inducted into the ‘Songwriters Hall of Fame’.
Leonard received the ‘Prince of Asturias Award for literature’ in 2011. The following year, Cohen was awarded with the Inaugural 'PEN Award for Song Lyrics of Literary Excellence' and the 'Prix Denise-Pelletier'.
In 2013, he was awarded the Artist of the Year at the ‘Juno Award’.
He was awarded with honorary degrees from 'Dalhousie University' and 'McGill University'. 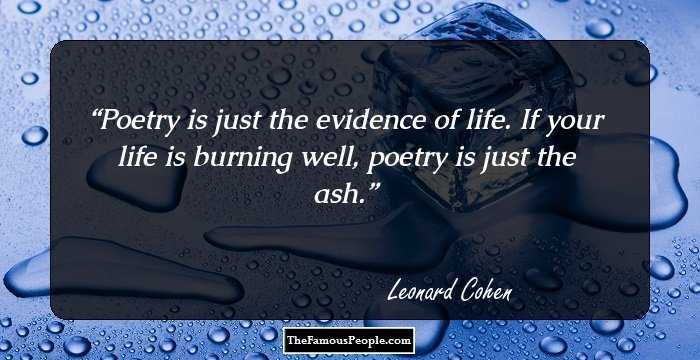 Quotes: Life
Personal Life & Legacy
During 1960s, he was in a relationship with Marianne C. Stang Jensen Ihlen but the relationship did not last long.
He was then romantically involved with artist Suzanne Elrod and they were blessed with two children Adam and Lorca. However, the couple never married even though Cohen’s many songs and poems revolved around Suzanne. They separated in the year 1979.
He was apparently in relationships with French photographer Dominique Issermann and actress Rebecca De Mornay.
He remained active till the very end of his life even though his body was ravaged by various ailments including cancer. He died on November 7, 2016, at the age of 82. In accordance with his wishes he was laid to rest with a Jewish rite in a family plot.
Trivia
In 1971, director Robert Altman made the film ‘McCabe & Mrs. Miller’ which had three songs from Cohen’s first album ‘Songs of Leonard Cohen’.

Quotes By Leonard Cohen | Quote Of The Day | Top 100 Quotes

See the events in life of Leonard Cohen in Chronological Order