(Known for Playing 'Spock' in The 'Star Trek' Franchise)

Leonard Simon Nimoy was an American actor, photographer, author, and film director. Starting his acting journey in his early-20s, he struggled for almost a decade; initially, he landed roles in low quality as well as B-grade movies. It was only after his role as ‘Mr. Smock’ in ‘Star Trek’ that he became a popular actor with ‘Mr. Smock’ becoming one of the 50 greatest TV characters. The half-human half-Vulcan character of ‘Spock’ remained in the limelight since its first episode till its last in 2013. Some of his other well-known works include his roles in ‘Mission: Impossible,’ ‘A Woman Called Golda,’ and ‘Fringe.’ He also became famous for hosting a documentary series called ‘In Search Of…’ His other works include his performance as a stage actor, voice actor, song writer, and singer. Acclaimed with a number of awards for his commendable acting skills, Leonard also tried his hand at direction. Also, his participation in ‘Standby: Lights, Camera, Action,’ a children’s educational show, was appreciated by the audience. He was also appreciated for his production skills in ‘Never Forget’ in 1991 and in a play titled ‘Shakespeare’s Will’ in 2007. Nimoy remained a successful and versatile professional his entire life. Dwayne Johnson
26th March In History
DID WE MISS SOMEONE?
CLICK HERE AND TELL US
WE'LL MAKE SURE
THEY'RE HERE A.S.A.P
Quick Facts

Leonard Simon Nimoy was born on March 26, 1931, in Boston, Massachusetts, USA, to Dora, a homemaker, and Max Nimoy, a barber. His parents were Jewish immigrants from Russia.

Nimoy got involved in acting at the tender age of eight when he appeared in a play.

He was always driven by his passion for acting. He even went against his parents’ wish who wanted him to study and choose a stable career.

While at ‘Boston English High School,’ he was actively involved in various acting projects. Post his graduation he got enrolled at the ‘Boston College’ in 1949.

At the age of 17, he took up the role of ‘Ralphie’ for the renowned Clifford Odets’ production ‘Awake and Sing.’

He was inspired by method actor Marlon Brando, so much so that he chose him as a role model.

He also joined the ‘United States Army Reserve’ in 1953, which he left after a span of 18 months. While in the U.S. army, he spent most of his time with the ‘Army Special Services’ and organized shows that were conceived and narrated by him.

During his services with the military, he directed and acted in ‘A Streetcar Named Desire,’ in association with the ‘Atlanta Theater Guild.’

Nimoy completed MA in Education from ‘Antioch University’ in 1977.

From the little earnings that he had from selling vacuum cleaners and working at ice cream parlors, he shifted base to the West Coast. 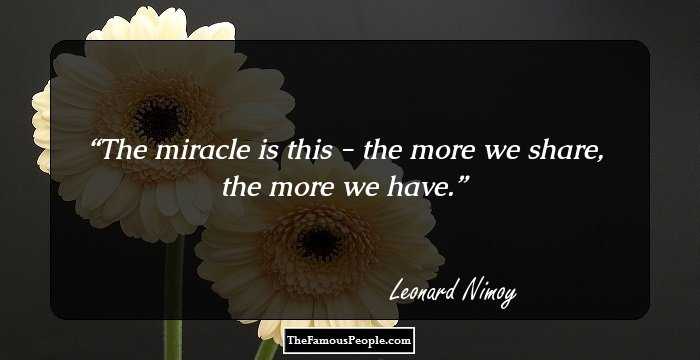 He appeared in minor roles in more than 50 B-grade movies and television series, such as ‘Dragnet,’ ‘Perry Mason,’ and ‘Zombies of the Stratosphere.’

He became well-known for his portrayal of ‘Spock,’ a half-human, half-Vulcan character in ‘Star Trek.’

After becoming famous for his portrayal of ‘Spock,’ Nimoy joined the cast of the popular film series ‘Mission: Impossible.’

He also voiced ‘Mr. Moundshroud’ in the animated TV movie ‘The Halloween Tree.’

He then voiced the character of ‘Atlantean King Kashekim Nedakh’ in the Disney animated film ‘Atlantis: The Lost Empire’ in 2001.

Nimoy appeared as a surprise guest in the ‘Weekend Update’ segment of ‘Saturday Night Live’ in May 2009. He appeared alongside Zachary Quinto and Chris Pine.

Nimoy reprised his role as ‘Spock’ in 2013 when he made a cameo appearance in ‘Star Trek Into Darkness.’ He became the only actor to appear from the original series in Abrams' ‘Star Trek’ films. 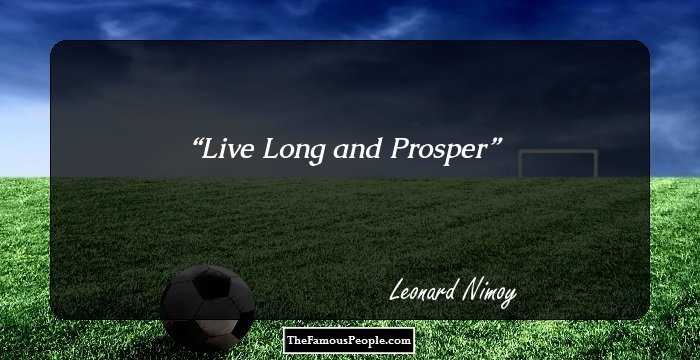 He received an ‘Emmy Award’ nomination for his work in a TV film titled ‘A Woman Called Golda.’

Leonard Nimoy was a private pilot and owned an airplane. He was honored with the ‘Douglas S. Morrow Public Outreach Award’ by the ‘Space Foundation’ in 2010 for inspiring people to learn about the universe.

His hometown Boston has been honoring him since 2009 by celebrating November 14 as ‘Leonard Nimoy Day.’

He has a star on the ‘Hollywood Walk of Fame.’

He had keen interest in photography since childhood. He studied photography at the ‘University of California’ in the 1970s with the intention of changing his career.

In 1987, he divorced Sandra. He then married actress Susan Bay, cousin of director Michael Bay, in 1989.

In 2001, he disclosed that he had become an alcoholic and drug addict while working in ‘Star Trek.’

Due to excessive smoking, Leonard Nimoy was suffering from chronic obstructive pulmonary disease, which was only revealed in February 2014.

Despite undergoing treatment, he succumbed to his ailment on February 27, 2015, at his home in Los Angeles. His body was buried in Los Angeles on March 1, 2015. 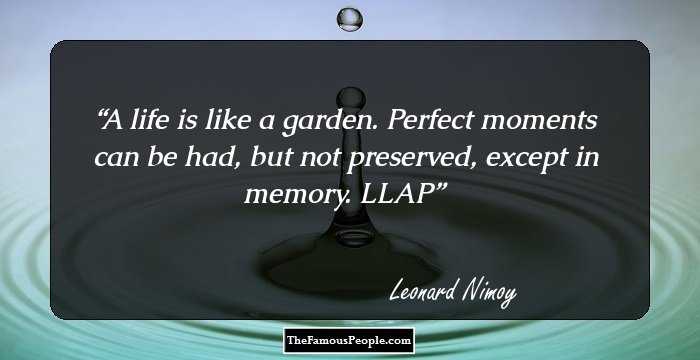 Quotes By Leonard Nimoy | Quote Of The Day | Top 100 Quotes

See the events in life of Leonard Nimoy in Chronological Order