11th April In History
DID WE MISS SOMEONE?
CLICK HERE AND TELL US
WE'LL MAKE SURE
THEY'RE HERE A.S.A.P
Popularity Index
10
Writers #5032
Quick Facts

Who was Leo Rosten?

Leo Calvin Rosten was a Polish-born American author, teacher and researcher. He is branded as a comedian in the sphere of screenwriting, stories, journalism and lexicography of Yiddish, a standard German language of Ashkenazi Jewish origin. He was a language connoisseur who familiarized Americans with terms and expressions of a different lingo. He brought into light the distinctive Jewish culture, their concepts and beliefs through his work in Yiddish; and how it has augmented the present day English. Through his writings, he reflected the nuance world of meanings profoundly buried within a tale, joke, idiom or other modulations related to it. His writings never failed to reveal his humoristic approach. He was a voracious reader with a broad array of intellect. He is best-known for his stories about the night school ‘prodigy’ Hyman Kaplan, written under the pseudonym Leonard Q. Ross and his encyclopedic ‘The joys of Yiddish’, is full of Jewish anecdotes and humor. His witty style of writing is quite apparent in critically acclaimed ’Hyman Kaplan’ which has been compared to the comic characters of Dickens and Shakespeare by the critics. It is one of the most-read classic works of American humor.

University Of Chicago
London School Of Economics
Aries Writers
Male Writers
Childhood & Early Life
Rosten was born into a Yiddish-speaking family in Lodz, Poland to a trade unionist couple, Samuel C. Rosenberg and Ida Freundlich Rosenberg. They immigrated to Chicago, USA when he was just three.
Raised in Chicago, he grew up in a working-class Jewish milieu where both English and Yiddish were spoken. Books and language fascinated him since childhood, and he began writing stories when he was just nine.
In 1930, he graduated from the University of Chicago and received his doctorate from the same institution in 1937. He completed his post graduation from the London School of Economics. 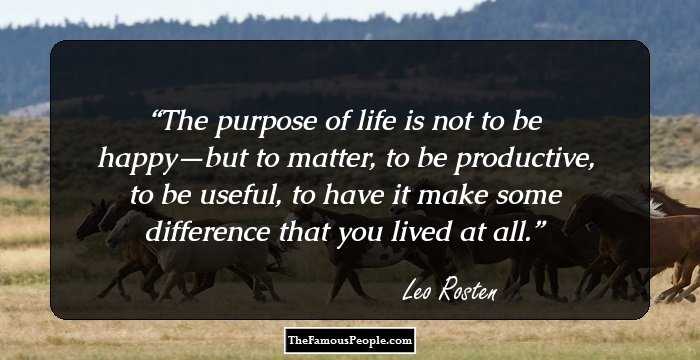 American Writers
Aries Men
Career
Unable to find work during the Great Depression, he taught English for recent immigrants at night, which later became a source of inspiration for his most famous work ‘Hyman Kaplan’.
He held a series of wartime government positions including deputy director of the Office of War Information and chief of the office of War Information’s motion pictures division.
In late 1940s, he worked for the Rand Corporation, a non-profit institution offering research and analysis to the United States armed forces.
In 1949, he joined the staff of ‘Look’ magazine in New York where he worked till 1971.
He also taught at Yale University, Columbia and the New School of Social Research, New York City. He was a visiting professor of political science at the University of California, Berkeley in 1960. 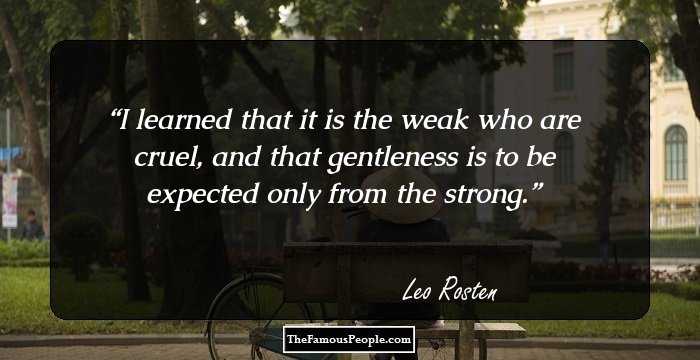 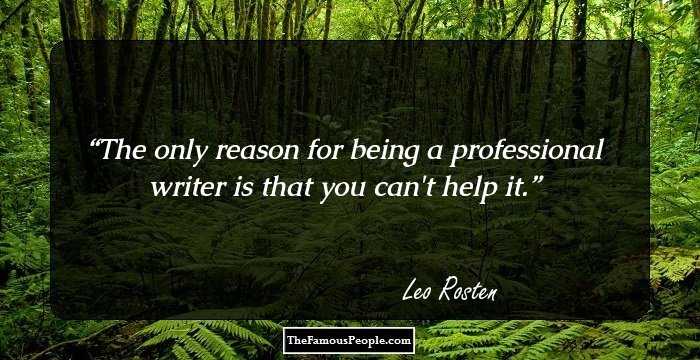 Quotes: You
Personal Life
He married Priscilla Ann ‘Pam’ Mead, a fellow graduate student at University of Chicago in March 1935. The marriage ended in divorce in 1959. He is survived by two daughters, one son from this marriage.
On January 5, 1960, he married Gertrude Zimmerman, who passed away in 1995.
Trivia
He was the one and only 20th century writer who always wrote his stories in Yiddish.
He loved reading English books and wearing English clothes. Apart from this, he was a part of London theatrical circle and an active member of many gentlemen’s clubs in London.
You May Like

See the events in life of Leo Rosten in Chronological Order 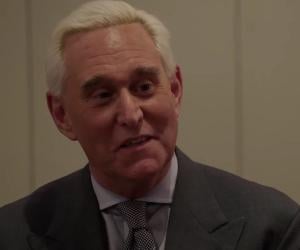