Laurence Fox is an English actor, singer-songwriter and political activist, best known for playing the role of DS James Hathaway in the ITV drama series Lewis (2006-2015). His other notable works include movies like Gosford Park, Becoming Jane and Elizabeth: The Golden Age as well as television productions like Whatever Love Means (television film) and Victoria (TV series). He has also appeared in numerous stage productions like Mrs Warren's Profession and Treats. Apart from acting, he is also a singer and songwriter who released his first single, Gunfight, in 2012, first EP, Sorry for My Words in 2013 and his debut album, Holding Patterns, in 2016. In 2020, he launched his own political party and ran for the post of London Mayor; however, he was defeated and even lost his deposit. Laurence Fox belongs to a family associated with entertainment industry from three generation. 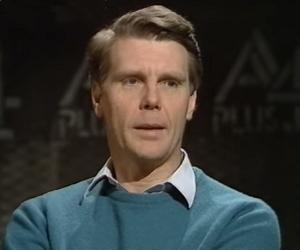 Laurence Paul Fox was born on 26th May 1978 in Leeds, England as the third child of actor James Fox and Mary Elizabeth Piper. His siblings include three brothers Tom, Robin and Jack and a sister Lydia.

He belongs to a family of actors. Apart from his father, his grandfather Robin Fox, too, was an actor and a theatrical agent. His siblings, Lydia and Jack as well as his first cousin Emilia and Freddie Fox are also in the acting profession. Additionally, his uncles Edward and Robert Fox are also actor and theatre/film producer, respectively.

He attended Harrow School in London but was expelled a few weeks prior to his A-levels for being troublesome. Due to this, he could not secure himself a place in any university.

After working as a gardener and as an office worker, he eventually followed in his family’s footsteps and joined RADA—the Royal Academy of Dramatic Art—from where he graduated in 2001.

Laurence Fox began appearing in stage production while he was still at RADA. Some of the stage productions that he became a part of include The Wild Duck, Titus Andronicus, Ulysses, The Wild Goose Chase and The Provoked Wife.

In 2001, he made his big screen debut with the British psychological horror thriller film The Hole and followed it up with the Academy Award-winning satirical black comedy mystery film Gosford Park the same year.

In 2002, he appeared as Captain Bramwell Jennings in the British German horror war film Deathwatch and made his television debut with ITV drama series Ultimate Force wherein he played Cpl. Mick Sharp in a couple of episodes.

In 2003, he portrayed Ralph Partridge in the Spanish-English romance comedy drama film Al sur de Granada (South from Granada) and appeared as Simon Walker in an episode of detective drama series Foyle's War.

In 2004, he essayed the character of the German Airman, Bernhardt Tellemann, in the British television miniseries Island at War and the next year was roped in to play SS officer Major Kessler in the British Romanian war film The Last Drop and a British soldier Capt. Tom Willis in the two-part miniseries Colditz.

The year 2005 also saw him acting in an episode of ITV’s period crime drama miniseries Jericho and in a couple of episodes of BBC’s miniseries documentary Egypt. Additionally, he portrayed the role of Prince Charles in the television film Whatever Love Means.

His work in Colditz drew the attention of actor Kevin Whately who recommended him for the role of Detective Sergeant James Hathaway in ITV’s 2006 detective drama series Lewis, the spinoff from Inspector Morse. Kevin Whately, himself played Sergeant/Detective Inspector Robert Lewis in both the original and the spinoff. Lewis ran up till 2015.

In 2006 again, he appeared in an episode – The Sittaford Mystery – of the detective television series Agatha Christie's Marple.

In 2007, he played Cecil Vyse in ITV’s television movie – A Room with a View – based on E.M Forster’s 1908 novel of the same name. The same year, he was seen in two biographical films – Becoming Jane and Elizabeth: The Golden Age.

In 2008, he was selected to play the character of Philip Manningham in ITV’s three part thriller drama television miniseries Wired.

A few years later, in 2011, he was seen in a historical romantic drama film – W.E. – co-written and directed by Madonna and a television movie Fast Freddie, The Widow and Me.

In 2012, he released his first single Gunfight and the following year came out with his first EP Sorry for My Words. It got good airplay, primarily on BBC Radio 2.

He then once again became a part of stage plays – Our Boys (2012) essaying the role of Joe and Strangers on a Train (2013–2014) playing the character of Guy Haines. A couple of years later, he played Charles de Gaulle in another theatre production The Patriotic Traitor (2016).

The year 2016 also saw him releasing his first album Holding Patterns through his own record label Fox Cub Records.

In 2017, he joined the cast of the British period crime drama series The Frankenstein Chronicles in its second season and the following year shot a pilot episode of Canadian drama Frankie Drake Mysteries.

In 2019, he played Lord Palmerston in the historical drama series Victoria and became a part of another biographical drama film The Professor and the Madman wherein he played Philip Lyttelton Gell, the editor of the Oxford University Press (1884-1896).

In 2019, he also played Lawrence of Arabia in the historical drama film Born a King and Owen in the drama film Us Among the Stones. The same year, he released his second album A Grief Observed too.

In 2020, he acted in the British-Spanish mystery thriller series White Lines which was released on Netflix.

In 2020, Laurence Fox was dropped by his talent agencies – first by Authentic Talent and later by Artists Rights Group – following a series of controversies related to his political views.

In 2020, he also launched his own political party The Reclaim Party and in 2021 contested in the London Mayoral election. However, he was unsuccessful and, with only 1.9% of vote, even lost his deposit.

Laurence Fox met actress, filmmaker and former singer, Billie Piper, in 2006 and married her the following year. They have two sons – Winston James Fox (born 2008) and Eugene Pip Fox (born 2012) – together. The couple divorced in 2016.

See the events in life of Laurence Fox in Chronological Order