Advanced Search
Billie Paul Piper is an English actor, dancer, and former singer, best known for her roles of ‘Rose Tyler’ in the BBC science-fiction TV series ‘Doctor Who’ and ‘Her’ in the play ‘Yerma.’ She rose to fame with her debut single ‘Because We Want To’ that aced the ‘UK Singles Chart,’ making her the youngest artist in history to debut at number one. Her fame soared with the albums ‘Honey to the B’ and ‘Walk of Life.’ She then ventured into acting. Over the years, she has evolved as a critically acclaimed and award-winning actor, both on screen and on stage. Some of her notable TV series are ‘Doctor Who,’ ‘Penny Dreadful.’ and ‘Secret Diary of a Call Girl.’ Two of her noteworthy films are ‘Things to Do Before You're 30’ and ‘Animals United’ (voice role). Billie has earned praises for her roles in the plays ‘The Effect,’ ‘Great Britain,’ and ‘Yerma,’ of which ‘Yerma’ led her to become the sole actor to win all six UK theatre best actress awards currently available for a single performance. Emilia Clarke
DID WE MISS SOMEONE?
CLICK HERE AND TELL US
WE'LL MAKE SURE
THEY'RE HERE A.S.A.P
Quick Facts

British People
Actresses
British Women
Female Dancers
Virgo Actresses
Childhood & Early Life
Billie Paul Piper was born Leian Paul Piper, on September 22, 1982, in Swindon, Wiltshire, England, to Paul Victor Piper and Mandy Kane Kent. Her parents legally changed her first name to “Billie” on April 25, 1983. She has two younger sisters named Elle and Harley and a younger brother named Charley.
She attended the ‘Sylvia Young Theatre School’ and ‘Bradon Forest School.’ She developed a passion for performing arts at an early age and would often sing around the house with her siblings. 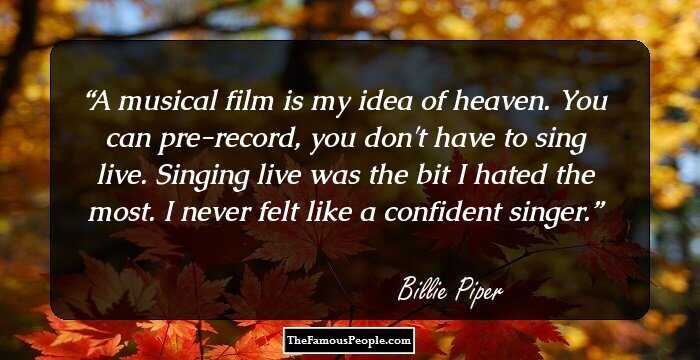 Continue Reading Below
Career
Being chosen to appear on the ‘ITV’ British children's entertainment show ‘Scratchy & Co,’ aired every Saturday, marked the beginning of Billie’s long career. Her initial endeavors saw her featuring in a TV commercial to promote ‘Smash Hits,’ a British pop music magazine.
In 1998, she signed a recording contract with ‘Innocent Records.’ On June 29 that year, she released her debut single, ‘Because We Want To,’ which entered the ‘UK Singles Chart’ at number one in July that year. The single made her the youngest artist in history to debut at number one on the chart.
Her second single, ‘Girlfriend,’ released on September 21, 1998. This, too, aced the ‘UK Singles Chart,’ making her the youngest and the first female solo singer to gain the number one position with her first two singles.
Both ‘Because We Want To’ and ‘Girlfriend’ were included in her first album, ‘Honey to the B,’ which was released on October 19, 1998. The album became a hit, garnering a “double platinum” certification from ‘Recorded Music NZ’ (RMNZ) and a “platinum” certification from the ‘British Phonographic Industry’ (BPI). It won Billie several ‘Smash Hits Awards,’ including the ‘Princess of Pop’ in 1998 and the ‘Best Female,’ the ‘Best Dressed Female,’ and the ‘Best Female Act’ in 1999.
Eventually, Billie released her second and final album, ‘Walk of Life,’ on July 12, 2000. The album received a “silver” certification from the ‘BPI’ and included the singles ‘Something Deep Inside’ and ‘Day & Night,’ both of which were among the top five singles in the UK. She retired from the recording industry in 2003 to pursue a career in acting.
After featuring in uncredited roles in a few films in the mid-1990s, Billie bagged the role of ‘Angel’ in the 2004 British mockumentary comedy film ‘The Calcium Kid.’ The next few years saw her starring in films such as ‘Things to Do Before You're 30’ (2005), ‘Mansfield Park’ (2007), ‘Animals United’ (2010, voice role), and ‘City of Tiny Lights’ (2016). The upcoming American–British drama–romance film ‘Eternal Beauty’ will feature her in the role of ‘Nicola.’
In May 2004, Billie’s inclusion in the first series of the revived British science-fiction TV show ‘Doctor Who’ as ‘Rose Tyler’ was announced. On March 26, 2005, she was introduced in the opening episode of the first series of the show ‘Rose.’ Billie essayed the character of the new traveling companion of the doctor, in his ninth and tenth incarnations, played by Christopher Eccleston and David Tennant, respectively.
‘Rose’ was a regular in seasons one (2005) and two (2006) of ‘Doctor Who.’ The character then appeared in three episodes of the show’s fourth season (2008) and later in feature-length specials. The series gained Billie widespread recognition and critical acclaim.
Her brilliant performance as ‘Rose’ won her several awards, including the ‘Best Actress’ award at the ‘The National Television Awards’ (2005, 2006), the ‘BBC Drama Awards’ (2005, 2006), and the ‘SFX Awards’ (2005, 2007). The role also won her the ‘Glamour Award’ for the ‘Best TV Actress’ (2006). She was also the recipient of ‘The Times Breakthrough Award – Rising British Talent’ (2006) at the ‘South Bank Show Awards.’
Continue Reading Below
On October 19, 2006, she released her autobiography, ‘Growing Pains,’ through ‘Hodder & Stoughton.’ The book was re-released on August 9, 2007.
The March 2007 London revival of Christopher Hampton’s romantic drama ‘Treats,’ staged at the ‘Garrick Theatre,’ launched the on-stage career of Billie. She played the role of ‘Ann’ in the play. Following this, Billie made her mark as a stage actor, performing in the plays ‘reasons to be pretty’ (2011–2012), ‘The Effect’ (2012–2013), and ‘Great Britain’ (2014). ‘Great Britain’ won her the ‘Best Actress’ award at the ‘What's On Stage Theatre Awards.’
Her next notable TV role was that of the semi-fictional character ‘Hannah Baxter,’ a high-end London call girl and the protagonist of the ‘ITV2’ TV drama ‘Secret Diary of a Call Girl.’ The series was based on the works of former London call girl Dr. Brooke Magnanti, better known as “Belle de Jour.” Billie’s performance in the series earned her praises from critics and won her the ‘Glamour Award’ for the ‘Best TV Actress’ in 2010. The series aired from September 27, 2007, to March 22, 2011.
She was part of main cast of the British–American horror–drama series ‘Penny Dreadful,’ which aired from May 11, 2014, to June 19, 2016. The show featured her in the role of a poor Irish immigrant, ‘Brona Croft,’ trying to get rid of her brutal, violent past.
One of the most remarkable and critically acclaimed performances of Billie in her expansive career so far has been that of ‘Her’ in an adaptation of Spanish dramatist Federico García Lorca’s 1934 play ‘Yerma.’ The play was staged at the ‘Young Vic’ in 2016 and 2017 and at the ‘Wade Thompson Drill Hall’ at the ‘Park Avenue Armoury,’ New York, in 2018. While ‘The Stage’ billed her performance as "a generation's greatest performance,” ‘The Guardian’ described her as "earth-quaking.”
She added another feather to her cap by becoming the only actor in British theater history to win all six UK theater ‘Best Actress’ awards currently available for a single performance, for her portrayal of ‘Her’ in ‘Yerma.’ These include the ‘Best Actress’ awards at the ‘Evening Standard Theatre Awards,’ the ‘What's On Stage Theatre Awards,’ the ‘Critics’ Circle Theatre Awards,’ the ‘Broadway World Theatre Awards,’ the Laurence Olivier Awards,’ and the ‘Glamour Women Awards.’ 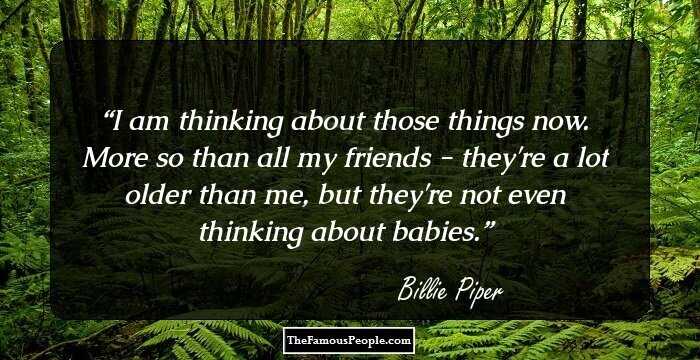 Family & Personal Life
She dated noted English TV presenter, radio DJ, entrepreneur voice actor, and TV and radio producer Chris Evans (16 years older than Billie) for 6 months before tying the knot with him secretly in May 2001. The two, however, separated in 2004 and divorced in May 2007. Billie did not claim any money from Evans, in spite of his huge fortune. Evans cited their age gap as a reason for their divorce and is still a friend of the diva.
Meanwhile, in 2006, she started dating Laurence Fox, her co-star from ‘Treats,’ and married him in December 2007 at the ‘St. Mary's Church’ in Easebourne, West Sussex. They have two sons, Winston James, born in October 2008, and Eugene Pip, born in April 2012. The couple ended their marriage after 8 years. They announced their divorce on May 12, 2016.
In 2016, she started dating Johnny Lloyd, frontman of the four-piece indie rock band ‘Tribes.’ On August 1, 2018, it was announced that Billie was expecting her third child.

Quotes By Billie Piper | Quote Of The Day | Top 100 Quotes

See the events in life of Billie Piper in Chronological Order